My grandboys loved the horses and I was getting them horseback every chance I got. Carson, 4, was riding Timmy, who was a fairly recent addition, Welsh size pony. Taygen, 3, was on my pet saddle horse Rush, who was 16 hands. Mostly I was letting Rush keep Taygen occupied and safe while I was coaching Carson on the operation of the pony.
While coaching Carson, I’d glance over at Taygen frequently to assure myself that my very small grandboy was safe on my very big horse. He was always grinning and Rush was at a sedate walk around the pen we were in. I had been going through a particularly challenging maneuver with Timmy, who was pretending he didn’t know anything, to enable Carson to keep him moving and to get him to turn when he wanted him to. I had neglected Taygen and Rush for several minutes. Carson had achieved victory over Timmy and was going the other way when I glanced over at Taygen. He and Rush were not moving. Taygen wanted him to go, but kicking with his feet was useless as the little kicks by short legs were cushioned by the saddle blanket. I told him he needed to smooch at Rush to make him go.
With that done, I had turned back to Carson and Timmy. When they went around the pen toward Taygen and Rush, I observed Taygen clear out over the saddle horn, feet behind him, face pressed to Rush’s mane. I asked him what he was doing and he replied “Smooching him Grandma.” I restrained myself from laughing out loud, but my smile made the little imp smile back. I then went to them and demonstrated the smooching sound I had meant. Taygen did it and Rush walked right out for him, which made Taygen grin ear to ear. Rush was happy with both kinds of smooches I’m sure, as he was used to being kissed on his face and front legs. The literal translation of a suggestion has tickled me for years and made me remember to use the right words when teaching them. 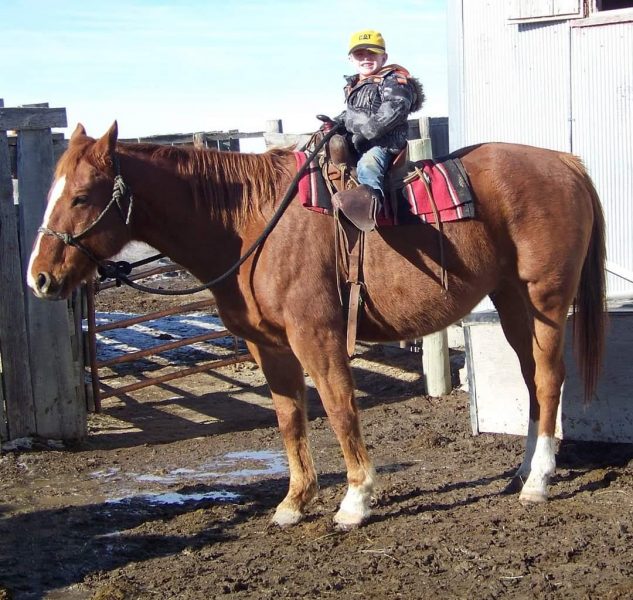 Over the following months, somewhere along the way, Taygen got the notion that he had gotten bucked off of a horse. I knew for a fact he’d never been, nor had he ever had even a close call, but he couldn’t be convinced. I’ve always believed that he had a vivid dream about it, having heard or seen something somewhere, but it sure made him not want to ride anymore.
We were going to do some practice in a bigger pen, Carson on Timmy and Taygen on Rush. Taygen sobbed inconsolably the whole time I saddled the horses and screamed bloody murder over the suggestion that I was going to have him ride Rush while Carson and Timmy were practicing. I knew my boy well enough to know he had to get through this, so I’m not cruel, as it might appear. I led Rush to the side of the pen, out of the way, and picked the screeching child up and put him in the saddle. Tears were everywhere, as well as a goodly amount of snot, but I needed him up and out of the way for safety sake.
Rush stood like a rock, reins hung on the horn, nonplussed by the noise occurring on him. I began working with Carson and Timmy and was very engrossed in that, as Timmy was being a stinker and Carson was needing my help to work him through it. I could definitely hear Taygen on the other side of the corral, so keeping track of him was easy. Pretty soon I had Carson guiding Timmy with success and I was giving him little tasks to do. I was so tickled with the progress that it didn’t register that it was quiet. I don’t know how long it had been quiet, but it was quiet.
Turning toward where Rush and Taygen had been, there was Rush, not five paces behind me, Taygen’s tear and snot stained face grinning ear to ear. He had asked Rush to do what Carson was having Timmy do on my command, and Rush was doing everything perfectly, just as a broke horse with no ulterior motive would do.
Taygen’s whole attitude had changed 100% and he and Rush were a team. The idea that little him could make big Rush do his bidding, was a big deal to the little guy. He couldn’t even get his brother to cooperate, so having Rush do it was pretty amazing. I was proud of both of them. Rush got lots of smooches and kisses that day too.