Many years ago, when our kids were pretty young, we hosted a shindig at the ranch where we worked. We had lots of folks and food, we sat around in the shade, visited and played guitars and had a generally great afternoon. There was quite a herd of kids, so they decided to have a baseball game.

There was a corner of a pasture not far from the house that was always grazed down pretty short and didn’t have too much cactus, so that’s where the big game was being played. There were some saddle horses in that pasture, but nothing that would cause any problems. The game went on for quite a while with the kids having a good time. One of us parents would glance over across the calving lot and check on the game once in a while and we could hear them laughing and having fun.

The tone of the game changed, though not enough to warrant one of us getting out of the shade to go check on anything. There was some yelling at someone and we figured a couple of siblings didn’t agree on a foul ball or something.

Suddenly, our oldest son, who was 11, came hurrying up through the trees and stopped in front of me, all out of breath and quite upset. He explained to me that Kelly had taken the ball and though they had chased him and chased him, he wouldn’t give it back. So, he was wondering if I could get the ball back for them.

Now, you must understand that I’m no baseball player and certainly no faster than those 7-14 year old kids that were playing, but I did have a key quality that they didn’t have. Kelly was my horse.

Yes, Kelly, upon hearing the activity in the corner of the pasture, had come over the hill to investigate. I was told he had stayed in the outfield just watching for along time, so hadn’t been a problem. He moved in a little closer behind the second base area and watched from there for a bit before a grounder came his way. He had promptly grabbed the ball and then trotted about merrily with the kids trying to get it back. He hadn’t left the baseball “field” and wasn’t even winded, though the kids were about to drop from trying to catch him by the time I got there.

I spoke to him and he turned and walked to me, still carrying the ball in his mouth. He looked pretty proud of himself and seemed quite amused by all the attention he’d received. I got the ball back, quite slobbery, gave him a good petting and after drying the ball off, I handed it back to the kids. I put Kelly through the gate into the lot to keep him from fielding anymore balls, and the game went on. 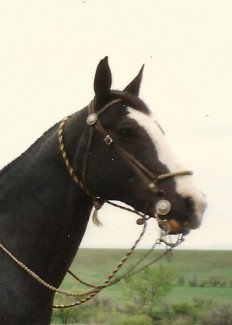