Horse owners come up with some creative names for their horses, and cowboys may take the prize for the zaniest monikers for their equine companions. Here are some of the most unusual and least politically correct horse names in the Western United States.*

Launch Pad: Preparing to step on this horse must’ve been a tad nerve-wracking! This name was given to a horse in legendary cutting horse trainer Buster Welch’s show string decades ago.

Neck Brace: This was a bay gelding in the cavvy of a ranch near Deeth, NV, so named for bucking off the foreman and breaking his neck (not fatally).

Dr. Dan: A broncy three-year-old filly in Idaho was named after the chiropractor where she sent her rider for treatment for his aching back.

Oprah: She was a big, black half-draft mare.

Oatmeal: A cowboy started a buckskin colt for a friend, so he named him Oatmeal as a joke. The joke turned out to be on him when his friend gave him the colt with the name firmly attached.

The one and only Oatmeal trots off through the Great Basin sagebrush. 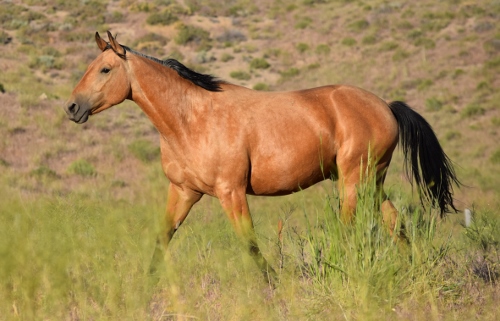 Roanie: Every ranch has at least one.

Richard Cranium: He was a hard-headed, strong-willed, difficult-to-get-along-with two-year-old stud colt at a cutting facility in Texas. Use the nickname for “Richard” and the common word for “cranium” and you’ll get the joke.

Stripper Fluff: A gelding in a buckaroo’s string at a northwestern Nevada ranch. Your guess is as good as mine.

Jenna and Tara: a pair of fillies in the two-year-old string at a Texas ranch. Jenna received her name because “she has a big ol’ butt, like Jenna Jameson,” and Tara was named after Tara Patrick. Their corral was called “the movie star pen” by everyone except the straight-laced boss.

Halle: She was a paint mare at a northeastern Nevada ranch. Her owner really liked the mare’s disposition, looks and athletic ability, so he thought to himself, What’s black and white and smokin’ hot?

Tuscarora Pine: This was a sorrel gelding owned by the lovely and talented Tilly Freeman of Elko, Nevada. She nicknamed him “TP,” but he was renamed “Tilly’s Pride” and “Toilet Paper” by some jokesters.

John Wayne: With a name like John Wayne, you know he’s going to be a cool horse.

What’s my name? Please tell me it’s not Roanie. That is SO overdone. I hope it’s John Wayne, or maybe Stripper Fluff. 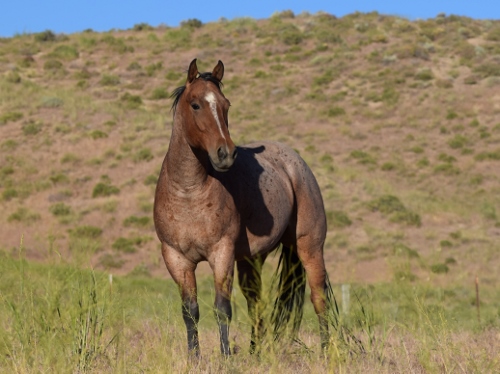 Ricky Bobby: Anyone remember the 2006 comedy Talledega Nights? A sorrel ranch gelding acquired by a cowboy during this time was named Ricky Bobby, because he wanted to go fast.

Number Three: An Arizona ranch acquired several gray horses that the cowboys had trouble telling apart. So, they branded them each with a different digit on the left hip. There’s also a Number Four, Five, Six, and Eight. The other numbers have since been sold off the ranch.

Pancake: Because when he bucks you off, you’ll be flatter than a pancake.

*The most politically incorrect names were censored off this list by the author, who desired to have this piece actually published by this website.