Horse with Mouth Problems in A Sweat

When a bridled horse is having problems with it’s mouth, it has many ways of showing it. Some examples would be slobbering, fighting their head, rearing, chomping at the bit, opening their mouth when reins are pulled, head shaking, bucking, and not moving out normally. Sometimes though, the reaction is so subtle that it takes a little effort to figure out the problem.

The gelding in this photo, a well broke, finished horse, was being ridden by a relative novice the day this photo was taken. To keep this finely tuned bridle horse from overreacting to a rein signal, the owner put a “Tender Touch” bit in his mouth so that he wouldn’t have to worry about the rider’s hands so much. She was very careful and gentle with the horse that day, and he never showed any real sign that he didn’t like the bit.

The horse was ridden with two other horses who got a pretty good workout that day, yet only sweated a little on the neck and under the saddle. The gelding in question, however, was absolutely lathered on the neck and chest, despite never getting out of a walk and spending quite a bit of the time standing still while the other two horses worked. He didn’t fight his head or slobber, but it was later noted that he also had a dry mouth that day. 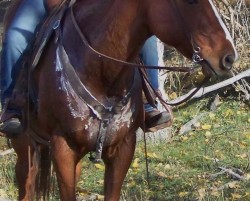 Not too much was thought of the oddity of his sweating so hard until the next day when the same rider used him again and gathered cattle, worked the pens, and covered some country. The only difference was that the second day, having considered the idea that his mouth was bothering him, he was ridden with a bosal to see if there was any difference. He never cracked a sweat except under the saddle.

Obviously, the horse’s mouth was worrying him, and though he never acted up in any way, he was stressing over it by sweating profusely. An appointment will be made soon to have his mouth gone through and any problems addressed.