“News-Journal July 03, 1919 – If you are looking for a good time attend the dance at the”Townsend” hall near Wild Cat the evening of July 4th!”
That item from the Newcastle, WY newspaper probably brought a lot of riders across hot prairie trails in the cool of the evening for festivities at a location which became known as “Clareton”, to dance the dust off their boots in Clareton Hall. It was one of those places that started as a post office, spawned a store, and became an entertainment center. 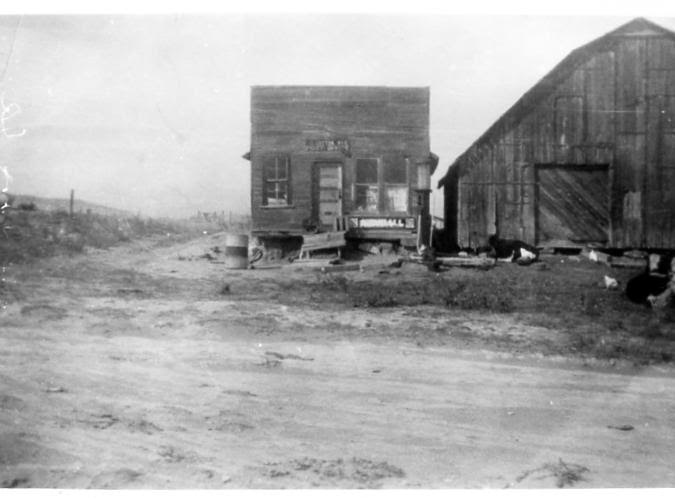 Townsend Store & Post Office at Clareton, WY is shown at left, early 1920’s. Clareton took its’ name from Clarence Townsend, who first operated the store. To the right of the Store is the original Clareton Dance Hall, which had a gas lighting system, the dance floor being lit by Carbide lamps. It was used for a barn after the new dance hall was constructed. (Thanks to Anna Miller Museum, Newcastle, WY for permission to use this photo.)

The Homesteader’s responsibility to fence their property, plus the advent of barbed wire, precipitated an occasion of horror at Clareton one autumn night. Transplanted Texan W.I. ‘Red’ Bennett was growing up within ten miles of Clareton, on his parents’ homestead adjoining his Aunt Grace Glover’s homestead. Red related the incident to me in the 1970’s.
It wasn’t uncommon for someone taking up a Homestead to weaken, tire of the monotony, drought, wind or winter misery and ‘relinquish’ that property; maybe before they’d even fenced it. The hardier crop of homesteaders who’d really ‘come to stay’ and build a ranch would happily pay the departing party for the right to assume their responsibility to finish the ‘proving-up’. Once
a few adjoining parcels had been accumulated, the entrepreneur would build fences to incorporate their entire property. Former fence lines might be moved, new areas fenced. Gossip about dances obviously traveled more quickly than gossip about property changing hands, and a roundup crew camped on a creek a dozen miles south of Clareton heard a dance was scheduled. The cowboys riding in the roundup “spit polished” and were joyfully loping in that direction across the night-shrouded open prairie when the lead horse and rider hit a tight, new, barbed wire fence that hadn’t been there the last time they’d ridden that way. There was an unfamiliar twang, horses spooked, snorted and started bucking, people were yelling. Injured horses struggled up in desperate attempts to flee, some entangled and dragging barbed wire and posts through the melee, pandemonium paralyzed the prairie! The lead horse and rider went down in shrieks, entrapped by the strong, new barbed wire, the panicked animal kicking and flailing, trying to regain its feet, the rider snagged by the wire as well. Other horses and riders leaped the fence at the last minute, some pulled up or turned a circle aside in time to avoid catastrophe. One quick-thinking, compassionate cowboy drew his pistol and mercifully ended the suffering of the broken-legged lead horse, then leapt off to help rescue the rider. Red Bennet was inside the dance hall with many other merry-makers when the door flew open and desperate men struggled inside carrying a bloody body . . . still alive. They were followed by others, ambulatory but bleeding to various degrees, in various places. Clareton Hall had a basement with a wood cookstove producing coffee in a huge pot, water heating in other pots to ‘clean-up’ after the midnight supper to be served from cakes and sandwiches brought in by ladies of the community, so warm water was available; along with piles of flour sack dishtowels always kept there for the same purpose. Those best fitted for the job took over, carrying the wounded rider down the stairs and laying him on the long wooden table from which the women had snatched everything. They stanched blood flow and cleaned and closed wounds as rapidly as possible with the available materials; while ragged wounds on several other riders were similarly attended by others. The most seriously mutilated cowboy survived, minus one ear, and was taken to town in someone’s car to find a doctor. They found one ear in the fence and it was reattached! Some cowboys took torn dishtowels outside to bind up wounds on their horses. The dance went on after everything that could be done with what they had to work with had been done, under the intense silent prayer coverage of every believer in the crowd. And ever afterward in that region, cowboys traveling at night took pains to watch for fences that may not have been there the last time they passed that way! 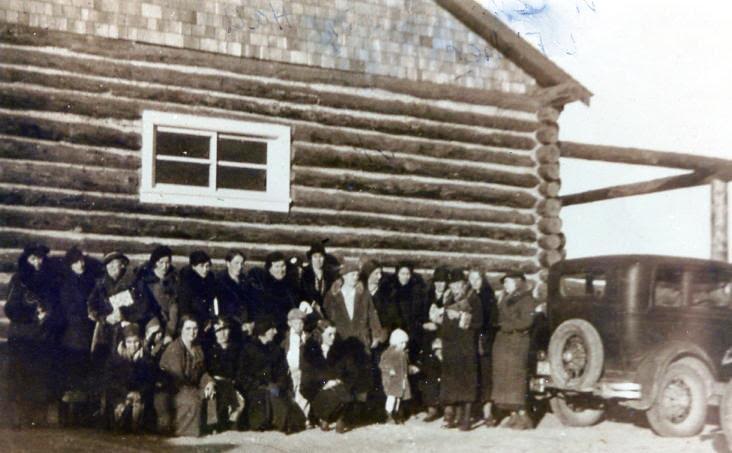 The new Clareton Dance Hall.The Progressive Ann’s Community Club (pictured beside the Hall’s walk-out basement entrance) was active in the region and Mrs. Tom (Mabel) Bruce was President of the group, as well as President of the Weston County Homemaker’s Council. During her tenure Mrs. Bruce managed to convince the Work’s Progress Administration to remove logs from a cyclone area between Newcastle and Custer, SD and use them to construct this hall as well as the Mallo Camp Lodge north of Newcastle. The hand-cut cedar shakes covering the peaked ends and roof of Clareton Hall show nicely above the ladies’ heads. (Thanks to Anna Miller Museum, Newcastle, WY for permission to use this photo.)

Old Clareton witnessed yet other tragedies arriving by horse. On a deeply below zero windblown midwinter day storekeeper Goodson and his wife spied a spectral sight rapidly approaching their front porch. A buggy drawn by one horse was racing across the deeply drifted, icy flat south of their abode! It was driven by a woman in a dress, standing up, hair blowing in the wind, with a small girl, arms wrapped around an even smaller brother hunched up on the single seat next to her. None of them had coat, cap or scarf! The Goodson’s donned their coats, grabbed blankets, and rushed outside as the woman screeched up, Elmer grabbing the bit of the frantic horse and securing it to the hitch rail as Olive scooped the freezing children into a blanket and carried them inside, instructing them to run and huddle around the wood stove. She hurried back to Elmer, who’d wrapped the screaming woman in a blanket and was wrestling her out of the buggy and onto the porch. Between them they managed to get her indoors and finally settled under many blankets on the bed, rubbing the telltale red frostbite warnings from her face and hands and feet as well as they could. Left alone on a starved-out homestead, husband gone working for money to buy groceries, the poor soul had simply lost her mind. When Elmer went to check at their homestead he found the house stone cold, no fire had been built for some time, and not a thing was seen that could be eaten. The lady was babbling incoherently, didn’t seem to recognize her children, nor her longtime neighbors – but by the grace of God she had gone to them in her plight. A doctor came out from town and could discover no physical malady, but the poor soul was full blown crazy. Waiting for the husband to be reached and come to sign papers for something to be done for his wife, Goodson’s cared for her and the children, but she never recovered her senses. She would eat and drink what Olive brought her, and accept her care and nursing. Then one day, weeping, she kept begging Olive to bend down near her pillow so she could whisper something to her. As Olive drew close enough the woman grabbed her in two strong hands and was trying to choke her. When Elmer heard the scuffle he came to the room in time to effect a rescue. They were very careful after that! The husband/father came and took his children, put his homestead up for sale and left the country; the wife was taken to an insane asylum. Mom said, as far as she knew, no one in the area ever heard any more about them.

The Clareton community and Hall was always the site of Independence Day celebrations. A picnic and cowboy roping and riding events usually filled the afternoon, followed by music and dancing. From early childhood I remember a frail, very elderly neighbor known as “Grandma Slagle”. Mom told me, “The first time I ever saw that lady was at Clareton, on the 4th of July. There was a big celebration, lots of people were there, but she was weeping – a kerchief over her face and her shoulders shaking with sobs. I went to her and asked what was wrong. When she could finally control her weeping enough to speak, she said, “That man carrying the hat is taking up a cash collection to give the man who can ride that outlaw horse, and my son is going to try it! He’s sure to be killed, or badly injured!” Wild young cowboys seldom let their dear mothers know of all their skills, and Sherrill Slagle was known as a top bronc rider in the community – but apparently not to his sweet white haired mother! He did ride the bronc to a finish and took home all the money from that hat; and apparently Mrs. Slagle survived the shock, as she lived nearly a century!