He’s An Own Son of Peppy San

My parents and I took a trip to Pueblo, Colorado in the summer of 1988. I had just graduated high school at the end of May. We found ourselves pulling up to the NHSRA finals in a 1976 Chevy pickup and a 16 foot bumper pull trailer. I was there to compete in the boys cutting event of the finals. I remember looking around at all the competitors in my event and the girls cutting event and thinking how did I get here? Well part of it, obviously was hard work, riding and practicing consistently, but also there was the horse we were hauling in that humble, little rig.

His name was Pogo San. He was a 1979 black AQHA stud with some white “skunk” markings on his tail. He was a good looking horse that would flat eat a cow up. This was probably a result of being an own son of the legendary Peppy San. His dam was a mare named Limits Stargo and gave him even more stamina and athletic ability. The bottom side of “Pogo’s” pedigree was all running; with horses like Go Man Go, Three Bars, and Oklahoma Star in his genealogy. The top side was Peppy San. Well, what else can you say about an AQHA Hall of Fame Cutting Horse? I was blessed to be able to ride Pogo when I was in junior high and high school. He left me great memories that I’ll cherish always. He taught me more than any clinician or trainer ever could. 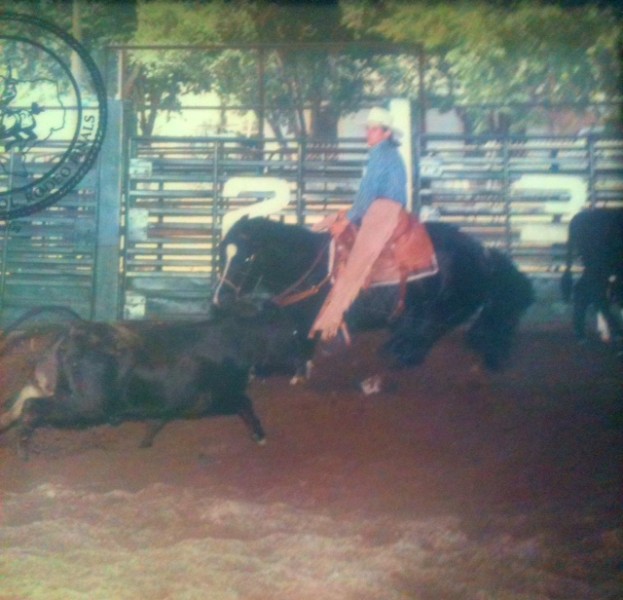 For those that are outside of the cutting circle it may not mean much to think of riding an own son of Peppy San. Let me put it this way: there were 493 registered foals by Peppy San and I got to ride one of them. Let me also say that I’m not sharing all of this with a prideful heart, but a thankful heart. I’m thankful that God would allow me to be able to call Pogo mine.

You’ve had that special horse or two in your life. If it was a registered horse then you know the pedigree by heart. You’ve rode that horse countless miles and through some pretty good wrecks. You may have ridden him or her to a championship in the show pen. Sometimes you attribute those good qualities to your horse’s lineage. Those are traits that come from their sire or dam.

As dads, we have the same kind of influence on our sons and daughters. We can pass on traits to our offspring just like horses on a pedigree. Dads, what is in your pedigree and what traits are you passing on to the next generations? Do they see Christ in you? Do they see a man standing for what is right and wrong according to God’s Word? Are you teaching them to live a Godly life by example and the words you speak?

If you have Jesus Christ in your life as your Lord and Savior then you have His pedigree. You are a son of God because of what Christ has done for you. Be sure that you pass that on to the next generations. It will help you as a father, it will help them as your son or daughter and it will help this country to be more Godly.

Have a happy Father’s Day!

I better fill out that pedigree paper work and send it in to Amarillo.

I’ll see ya’ll out in the pasture!

Wendel Elliott is a cowboy preacher, serving right at six years as pastor of Big Bend Cowboy Church in Alpine, TX. He also manages a cow/calf operation in the area. Wendel's writing and messages come straight from ranching experiences and the Western way of life....

View all posts by Wendel Elliott