PRCA trick rider Bethany Iles has a new horse, a very special one.

Cowboy, a nine-year-old palomino, just came into his own last year.

The Okahoma-based cowgirl had a trustworthy trick riding horse, a palomino named Vanilla.

But with her and her partner Rider Kiesner’s busy rodeo schedule, she needed another mount.

“He knew absolutely nothing,” she said. When Covid shut down her and Rider’s rodeo schedule, she spent the spring training him.

For a long time, he didn’t show much potential. 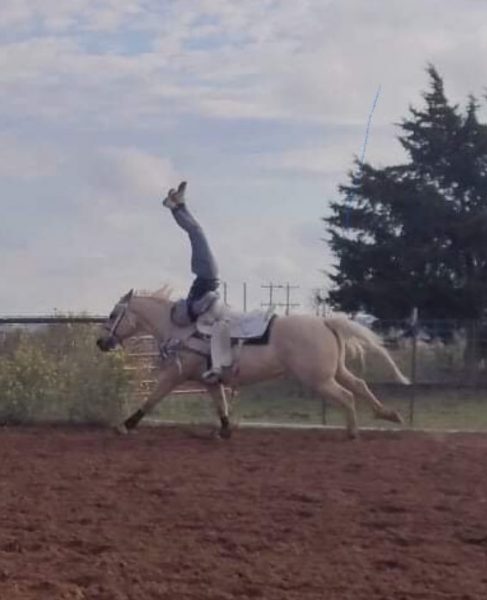 Bethany Iles does the shoulder stand on Cowboy in the practice pen.

“There were times Rider and I would look at him and say, he’s not going to work,” she said. “He didn’t catch on to the pattern, and when he did the pattern, he was slow.”

She considered selling him several times, but she knew her primary horse, Vanilla, needed a break so he wasn’t working every rodeo.

So in 2021, he went on the road with them. He gained experience and learned more, eventually catching on “fast,” Bethany said.

He’s nearly as experienced as Vanilla is. He’s trick rode under the lights in a dark house, and the only thing he hasn’t done yet, is running under the laser lights at building rodeos.

The two look alike, both “blondes” with white blazes. Bethany can tell them apart, but Rider, who knows them both, can’t always tell one from another. 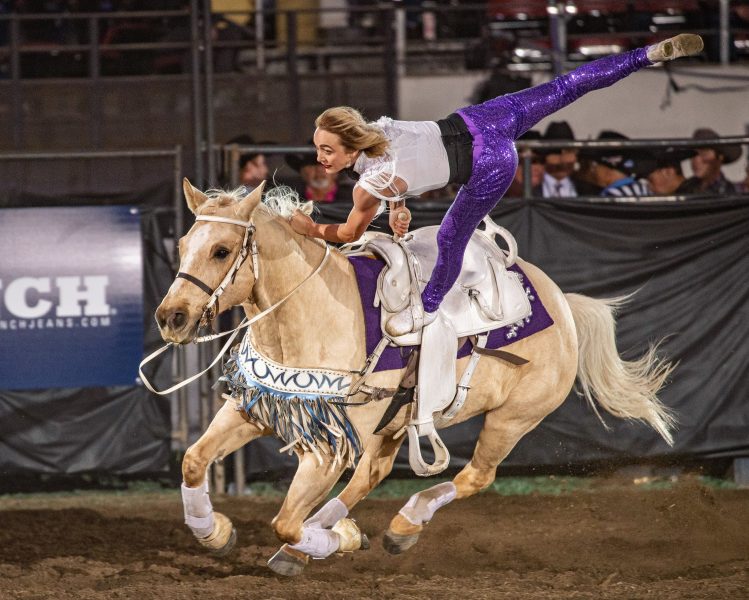 Bethany Iles’ palomino horse Cowboy started slow in the trick riding practice pen but when he began catching on, he learned fast. Photo by Phil Kitts.

Bethany does different tricks on each one and says as a trick rider, she can feel their different strides.

When she purchased the gelding, he came with a different name. One day, after an exceptionally bad practice, she was riding him to cool him down, almost 100 percent sure she would sell him, when she started to pray for him. She decided he needed a new name. “This horse needs a new identity,” she thought.

She had learned to trick ride with Linda Schultz, who trick rode professionally for years. Bethany had ridden one of Linda’s horses at a clinic, a horse named Cowboy on who she did her first tail drag. “That horse was the fastest horse I’d ridden in my whole life,” she said. “At 25 years old, he was still fast but he took care of you.” She was smitten with Linda’s Cowboy, and at the time, said, “one day I need a horse just like Cowboy.

He has an even, kind temperament that she and Rider appreciate. “He’s our favorite child because he’s always so pleasant,” she said.

And now she has her own Cowboy.

Bethany and Rider were the 2020 PRCA Specialty Act of the Year winners. 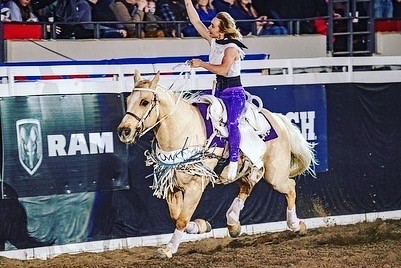 Bethany waves to the crowd after she performs her trick riding aboard her newest horse, Cowboy. Photo by Phil Kitts.