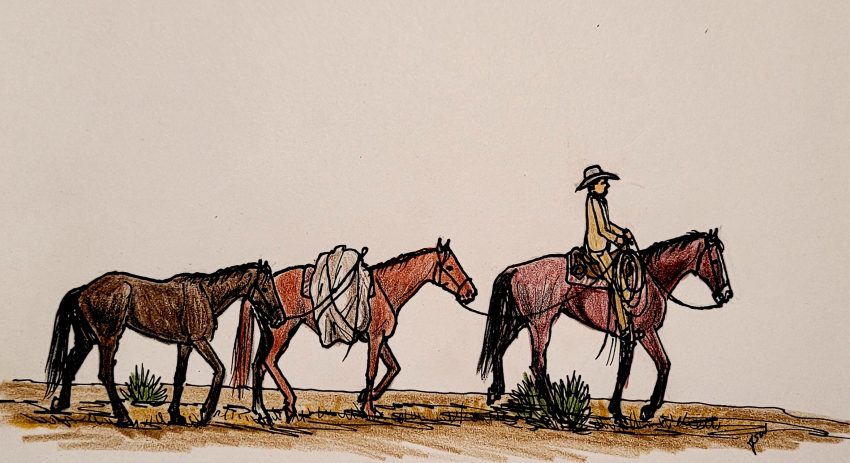 In the late 1920s and into the 1930s, my grandparents were struggling to hang onto a ranch on the eastern Colorado plains. The recession and Dirty 30s were hard times for most and folks had to dig in to survive. There was just hardly a dime to be found and folks bartered for most things.
My paternal Grandad was a cowboy’s cowboy and rancher. He was a top hand on a bronc and could really rope. One thing that could still pay decent wages, providing you were successful, was the infant sport of rodeo. In his day there was bronc riding, roping, races and relay races at most county fairs. Grandad participated in all of those until the reality of getting injured made him quit bronc riding. However, he could still pay his entry fees in the other events by working for the man who brought the bucking horses.
He didn’t have any way to get to those fairs other than by horseback. His horses were Snip, Traveler and Sailor if I recall correctly. He snubbed broncs, roped and raced them. The relay races used all three. He could make a decent month’s wages if he won or placed in his events, which he generally did.
One year they’d had a beef critter break a leg and, without refrigeration it wouldn’t keep long, so they ground it up with a hand cranked grinder. It was doubtlessly quite lean. They took it, loaves of bread, some fry pans and I suppose whatever wood they could gather up, and went to the fair. Grammy cooked burgers over the wood fire and sold them during the day. Between her burgers and Grandad doing well in his events, they had a big day and took home a decent amount of money. Enough to keep them going for a while longer. Dad recalled that he and his little brother each got a piece of penny candy due to their comparative prosperity.
Grasshoppers came in droves one summer, eating what little feed was left for already hungry stock. Grammy had some money saved up, perhaps from the burger sales, and she sent for a huge order of turkey poults. I don’t remember exactly, but there were several hundred. They came on the train from Denver and they hauled the crates home in the wagon. Grammy and her little boys spent the summer herding those turkeys as they gorged on the grasshoppers. They had to lock them in the shed at night to keep the coyotes from getting them. That fall, the hopper fat turkeys were sold to a buyer in Denver, both as live and dressed birds. The profit helped them through the winter.
Desperate times call for desperate measures, so Grandad took a garbage route in the nearest town. He’d take his wagon and pick up any food waste, butcher offal, spoiled grain from the train, dead stock and anything else he could feed hogs. He’d buy or trade for thin hogs from the area and put them in pens. The “garbage” was fed to those hogs. He’d pull in the pen while their dog Sandy watched the gate, and shovel the wagon out. He was sure careful around those hogs as they were hungry and would take a man down as soon as look at him. It must have been a nasty job with plenty of flies, too. He also bought crippled or old horses and cows and put them down to feed the hogs. It was grim, but so was the very real prospect of his family starving. It was a quick death at his hand at least.
I hope I never have to go to the measures that my grandparents did in those times. But, most of us have those kinds of people in our pedigrees. Those that didn’t know anything but work. There were no handouts, so they worked for anything they got. Maybe we’re tougher than we think.