When I was a little runt of a kid, probably around five years old, I rode a pony that I loved in spite of his tendency to run off with me. His name was Skipper. I spent hours every day just hanging out with him and riding him around in the corrals with no bridle or saddle. Typical little ranch kid.

My Dad had a two or three year old stud colt that he needed to get gelded but hadn’t had time. So, to keep that colt away from the mares in the saddle horse bunch, Dad put him in the big west corral with Skipper. Then Dad gave me absolute orders to stay out of there as that stud colt wasn’t a pet and he was a stud.

Honestly, I don’t know what Dad was thinking. I could no more stay away from Skipper than I could resist a warm cookie. Even the threat of Dad’s wrath couldn’t keep me away from him. I slipped around to the side of the corrals where I wouldn’t be seen and crawled through a hole at the bottom of the fence. Skipper and I met in the middle of the corral. Rusty, the stud, was standing off a ways as I put my arms around Skipper’s neck to hug him. I was standing there like that when Rusty approached from behind me. Engrossed as I was with Skipper, I didn’t notice Rusty.

Like the strike of a snake, Rusty reached out and grabbed me by the shoulder. He picked me up easily and shook me like a dog shakes a rat. When his grip on my shoulder broke, I flew through the air and landed nearer the fence. I scrambled on hands and knees and got through a hole in the fence before he could get ahold of me again.

I remember being absolutely terrified. It hurt bad and I had teeth marks clear down on my shoulder blade and below my collar bone. Blood was seeping through my shirt that now had a tear in it.

It’s odd the things one remembers, but I remember the shirt was a pale yellow and how the blood looked that I could see on the left side of my chest. 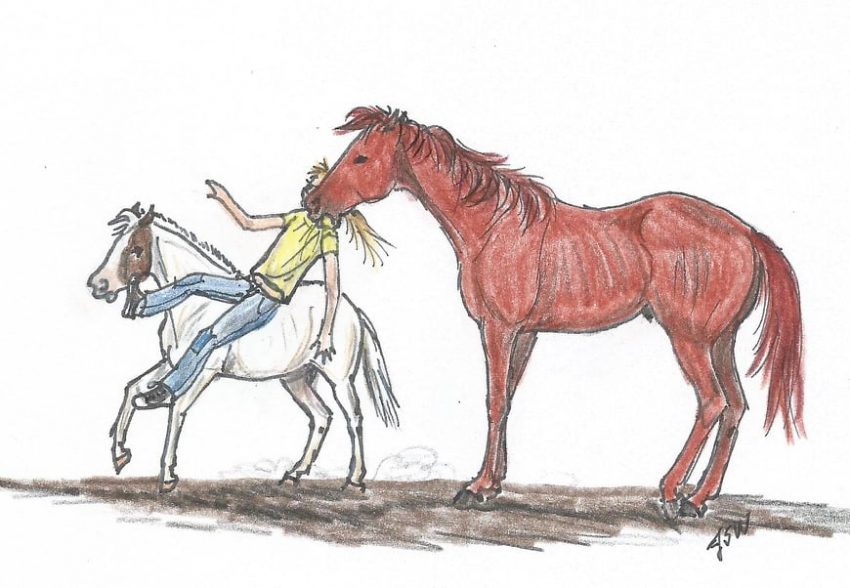 My first thought was how much trouble I was in. I knew that I would catch it from Dad and Mom, so my first thought was that they just couldn’t find out. I needed an ally to help me, because though I wasn’t very wise, I did know I needed to have the wound taken care of. I sought out my sister Linda who was seven years older than me. I don’t remember how I found her without encountering Mom, but I did. Perhaps Mom was gone to town or in the garden, I don’t know.

Linda got me cleaned up and bandaged so I wouldn’t bleed through my shirt. Then she wadded my yellow shirt up in some trash and stuck it out in the burn barrel under some other things. She took care of that shoulder until it was all healed, and since she was often the one who helped me with baths and washing my hair, Mom never had occasion to see my shoulder. It healed up just fine. Neither Mom or Dad ever knew about what happened. Until now, it was just Linda and I who knew.

Rusty was soon gelded and Skipper and I were reunited without further incident. I healed up fine and Rusty became a fine saddle horse in time. But, I never forgot just how hair triggered and genuinely dangerous a stud could be. Even a young one that was unprovoked.