The cowboys of the ranch by which we’re employed were contracted in February to start several colts for an outside source. Two of the cowboys started halter-breaking the colts for the first few days from atop trusty mounts.

Doing so gives the human a few advantages and makes starting smoother on both horse and human. Working fresh colts from horseback lends itself well to started, but green, horses to advance as well as steady ranch horses.

I pulled the expertise of my husband, Boe Simmons to aid in this post. He’s the colt-starter in the family. Let’s just say, I can’t stick: to saddles or diets. 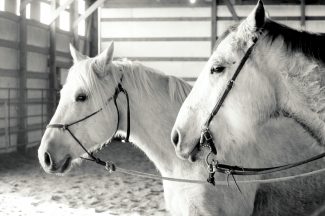 In any case, Boe prefers to be horseback through many of the starting stages to propel colts’ learning and save his energy while utilizing his saddle horse. He claims to not be a professional, but our goal is for these ideas to make you think.

The presence of a saddle horse can act as a soother to colts versus perhaps only a cowboy and colt.

He said if a horse chooses to fight the halter, it is easy to dally the lead onto the horn, as if roping a cow, and let the colt fight against the saddle horse rather than a person.

A horse is also more steadfast than most humans, so at those times it wouldn’t be advantageous to yield to the colt, but a human might for lack of strength, a horse and roping saddle is more reliable. This aid in timing may help a colt understand yielding to the halter slightly quicker than a person on the ground who may be pulled around more.

When a colt’s lead is dallied on a mule-hide horn, it’s possible to slide some rope before holding tight allowing for the colt a chance to feel before having to come to a full stop if the feel didn’t reach. 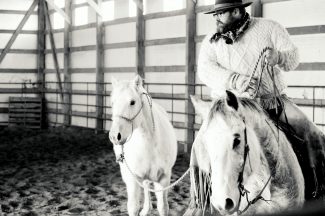 In my next post, I’ll explain more benefits to being horse back as you continue with your colts training.