I was working for an outfit years ago that had lots of country to cover, lots of heifers and cows to calve, and I was mostly on my own. The cowboss was supposed to help me with a lot of the riding and work, but he wasn’t proving to be very reliable in that way, so I had lots of miles to cover every day tagging calves and doctoring pneumonia brought on by the dry spring.

Calving was about over by the end of May so I was busy riding on the yearlings and checking the pairs every day. The cowboss’s wife had a little brother who was about 15. His parents decided that the best way to keep Jimmy out of trouble was to send him out to the ranch far from the bright lights of town. The cowboss didn’t want to babysit him, so it fell on me to do so. I was thrilled. The kid thought he was a cowboy since he owned boots and a hat. He wasn’t. As a matter of fact, if the word “gunsel” was in the dictionary, his picture would have been beside it.

So, I had to try to teach Jimmy something. The only horse on the ranch that was safe for this kid was a big, good looking horse called Eagle. He was a splendid specimen at over 16 hands and probably in that 1300 pound range, bay with a little chrome here and there. There was a good reason that no one usually rode Eagle. He could really buck. However, he was so smart that he knew he needed to earn his keep somehow, so he was the dude horse. As long as no one actually asked anything of him, he was quiet and nice. No spurs, no expectations, dude horse.

I had been trying to teach Jimmy some basic cowboy etiquette, such as not riding in front of another horse and definitely not in front of the boss or a superior. He wasn’t catching on. At all. He would repeatedly ride in front of me and after several days of this, I was done talking. Something I knew about Eagle was that if you could ride him, you could rope anything off of him. The glitch in this was that if you missed and your rope drug by Eagle’s feet, not necessarily even touching them, he would blow up and buck like an NFR eliminator pen horse.

For the 15th time one day, Jimmy rode Eagle in front of me as we were going across a flat. I didn’t say a word, just got my rope down, built a loop, and pitched it on the ground in front of Eagle’s hind feet. Oh boy. Eagle went high enough in the air to scare the buzzards! He bawled, bucked and really put on a show. Jimmy hadn’t quite made the first jump, so he got to watch from the ground as Eagle tore up a goodly piece of sod, finally stopping when he was winded. 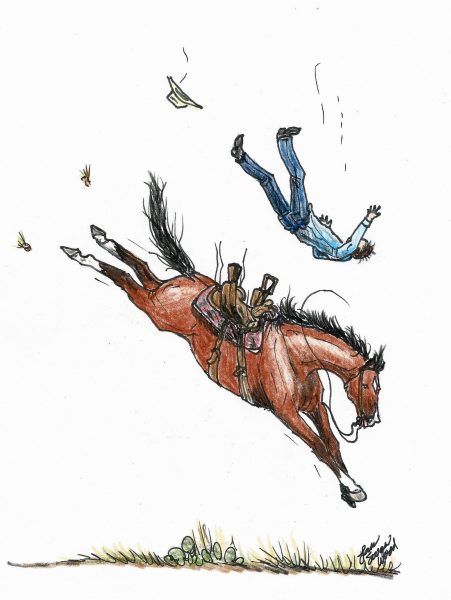