This week we have the pleasure of sharing with you some beautiful art by Teri McTighe. Visit our Instagram to view more of Teri’s amazing artwork.
Teri McTighe grew up on a ranch in western South Dakota, where she rode and trained horses while working with her Dad, Joe and Joe’s pride herd of Hereford cows. She became interested in art early in life thanks to her mom, Joanne, who is also an artist. The tools and materials she needed were always available to Teri along with the abundant inspiration provided by the Great Plains, their rich wildlife, and changeable, varied landscape. 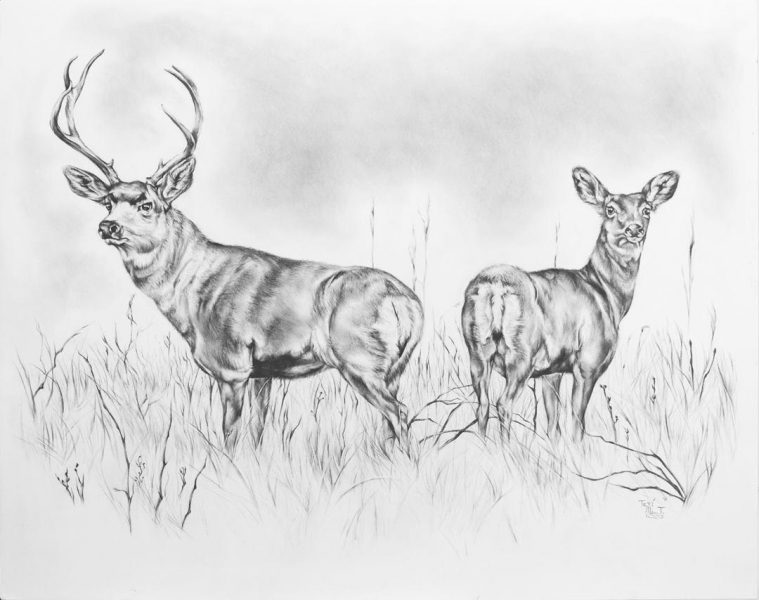 Teri and her mom are currently running the family ranch full-time, continuing the Hereford herd Joe put together. Finding time for art has become more difficult since taking on the many responsibilities of a self-sufficient ranching operation, but Teri still manages to turn out a variety of pieces. 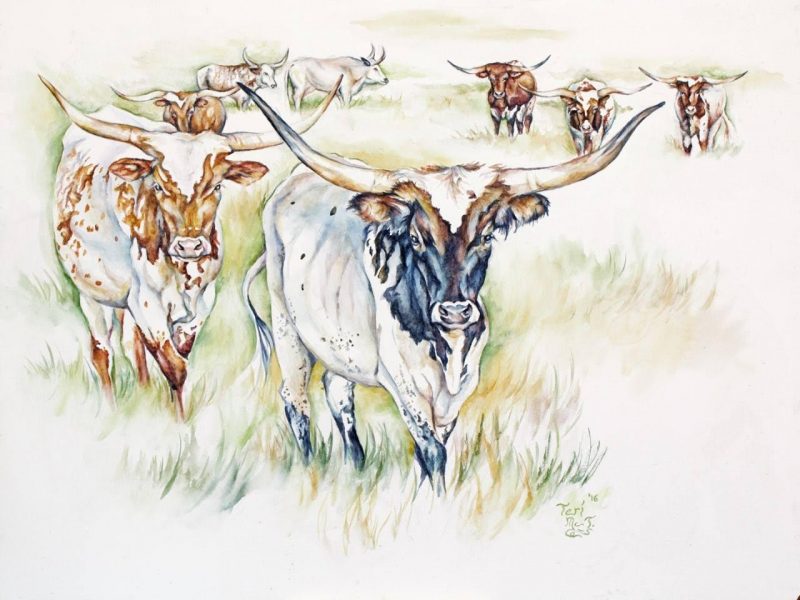 Teri’s early love of art carried her towards one of her two college majors. She graduated Black Hills State University magna cum laude in 2007 with a BA in Fine Art. Since 2009 (after completing an English major also earned at BHSU) Teri has been working to promote and market her art in a wide variety of ways and places. Teri has always had a special love for the personalities, sensitivity, and motion of the horses she grew up with. Many of Teri’s pieces attempt to capture the many moods and aspects of this beautiful creature. All of her work features scenes from the family ranch and surrounding areas. Teri’s goal is to convey to her audience the love she has for the South Dakota prairie and the ranching lifestyle. Additionally, all of the art she creates is free-hand. She works from her own photography, and does not use tracing, projection, or grids. She has been noted many times for fine detail in all her work. Her mediums include: graphite pencil, watercolor, bronze sculpture, colored pencil, and a special type of sculpture combined with acrylic painting to make it seem as though a painting is coming to life and escaping from the canvas. Teri calls this technique Sculpting Outside the Box™
Teri has participated in a variety of shows and events across South Dakota, North Dakota, Nebraska, Montana, Wyoming, and Colorado. Noted shows include: six consecutive years at the Black Hills Stock Show & Rodeo in the Western Gallery, a three week artist’s residency at Sylvan Lake Lodge in 2012, being selected four years in a row to show her work at the First Lady’s Prairie Art Showcase that takes place in conjunction with the Governor’s Hunt in Pierre at the Ramkota Hotel. She has also shown for three years at Ft. Robinson, Nebraska in their Western & Wildlife show, and has been an ongoing vendor at the Custer State Park Buffalo Roundup since 2011.
Teri’s original artwork has been sold from California to Illinois, and she has original pieces that have made it across the Atlantic to England and Switzerland. Teri has won several best of show and best of class ribbons in competitions, including 1st, 2nd, and 3rd place in painting at Crazy Horse Memorial’s Gift from Mother Earth Festival. She also was honored with the Award of Excellence at the Brookings Summer Arts Festival in 2012. Teri’s art has been featured on the covers of Today’s Horse magazine, and on the yearly herd reference guide for Cattle Business Weekly. Her artwork has appeared in the Rapid City Journal on multiple occasions. 39 of her pen-and-ink illustrations are alongside stories written by Mel Anderson in the 5th book of his Pony Tracks series entitled “Saints & Sinners.” Teri has also illustrated two children’s books. The author Codi Vallery-Mills has created an ongoing series about a boy named Carter and his mule, Husker. Teri’s whimsical watercolor illustrations can be found in both Husker the Mule: A Birthday Present, and Husker the Mule Does His Chores. Keep an eye out for future books in this series!
Visit Teri’s website to learn more: www.artoutofnowhere.com

Horses have been a part of my life since I can remember. Riding with my Dad as a youngster was what I lived for. There was nothing better than working cows, or racing my dad across an alfalfa field. It seems I never grew out...

View all posts by Jessie Salter