It was a lovely, unseasonably warm, early April Saturday night.  There was extra family in from town, and plans were made to go to dinner at our local steakhouse, about 13 miles away, because what do ranchers eat when they’re not eating their own steak? Steak.

I’d spent the day doing various chores, doctoring a couple crippled horses, and headed out to leave, wearing my work clothes, not having washed up.  While heading to dinner, I dreamed of enjoying Greyhounds that someone else would make, while visiting over a very rare steak, supported with sweet potato fries. After washing up I walk out to join the rest of my family, and my phone rings.

Our neighbor had just driven by the place and told me that two of our young studs were out. I hadn’t even yet sat down.  When we disconnected, I said hello and goodbye to the family, explained the situation, put in my “to – go” order and back to the ranch I went.  I had two choices – be upset that our studs were out and ruined my dinner, or make the best of the situation and keep my mind positive, so I could think my way through how best to remedy the mess.

Driving home, my mind wandered to the fact that I could still make a greyhound to enjoy with my steak but had to quickly shift gears to stop thinking about food since it was now 7:30 and my stomach was rumbling. I ran through every possible scenario of where the studs might be when I arrived, and what the fastest plan of attack would be so I could 1. get back to the steakhouse in time to hang out, or 2. not be chasing horses in the dark.  I decided that no matter what happened, I’d still get supper, and the job would get done, even if I didn’t get to hang out with the family.

I hoped that I’d find them both in the Northwest corner of our saddle horse trap — the same trap that contains the corral that they’d found their way out of.  If they were both there I could drive to the new barn, open their corral gate, and the barn, shut a couple other gates and haze them into either space so they’d be trapped!

Hurriedly, I found ,and repaired, where they’d pushed through, opened the gate to their corral, opened up the barn, drove out of that trap and shut the gate to the road.  I had seen one of them in the corner, and I figured the other couldn’t be too far away.  As I drove down to the cow corrals, I noticed Cisco, the older of the two, fighting over the fence, with the supreme stallion on our place, WDX Nukem (Nuke), and while that’s going on, I see Nutter Butter (a half brother to Nuke), the other stallion, trotting South back to the cow corrals. 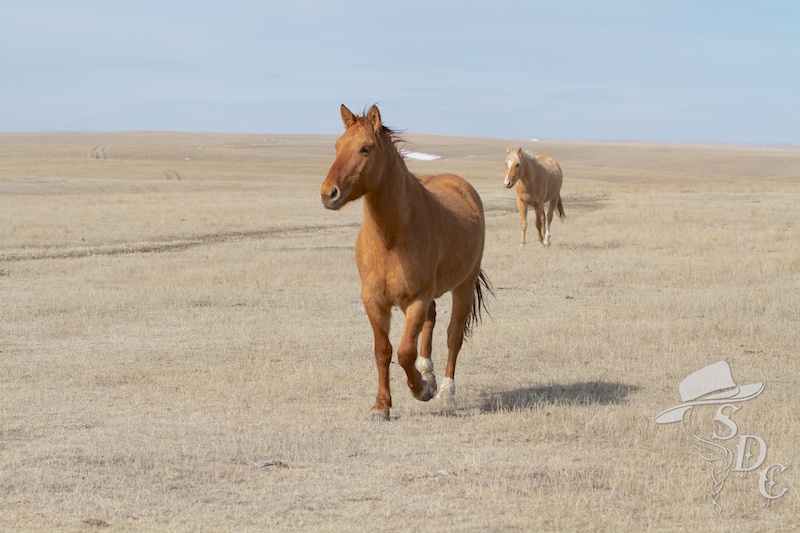 My timing was impeccable, because I drove straight to the second open gate into the saddle horse trap, and shut it just as Nutter Butter trotted up. At least now he’s one step closer to where he’s supposed to be!

Score one for the cowgirl.

Now, for Cisco. I get there just in time to see him go left out the open corral gate, and witness Nuke charge him, breaking through two mega plank corral panels and see for a split second he’s thinking about jumping over. My body language thankfully made him change his mind. I chased Cisco back into the pen where he’d been, and hazed him into our shipping/working round corral. I locked that corral gate, and ran to grab a halter. 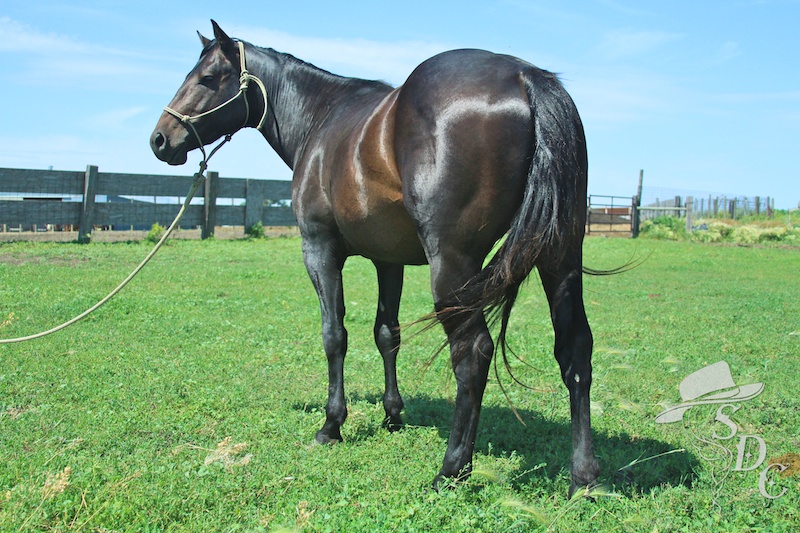 By the time I got back, Cisco had wandered down the working chute and realized he’s kind of stuck — in that he’ll have to back out if he’s gonna get out of his current predicament. Climbing on to the catwalk, I halter him, and back him down the alley, and we trot right over to the ATV. I climb in, and start the task of leading him a quarter(ish) mile home.

Meanwhile, Nutter Butter had joined with the first calf heifers, in watching the commotion from over the fence, so I figured I could probably just pick him up on our way to their corral, but I didn’t see him.  The sun is now beginning to set.  Cisco was breathing pretty hard all the way home, but I figured if he had the energy to fight with Nuke, he could muster the energy to trot back to his pen. Once back where he belonged, I had to figure out where that little red dun stud had gone off to.

He was back in the corner, hanging out near the saddle horses, unharmed, not sweating, quietly eating, glad for the company. Most of the  horses had their heads over the fence watching all the commotion.

My other half, Zach, had called me at least once during this melee to make sure I didn’t need any help (he’d been out of town at a basketball tournament and was planning to meet us all for supper), and as I neared the corral with Nutter Butter in tow, he texted saying he was on his way home with some steak. That elicited a “yeah yeah” from me.  I closed up shop, drove back to the cow corrals, and after blocking the fence casualty from the Nuke/Cisco debate about who was the tougher stallion, with the ATV, I traded it for the SUV.  I’ll tell you who the tougher stallion is and it’s NOT Cisco.

When I got home, I traded the mail for the vodka. I was finally going to get to enjoy my cocktail. Which I did, while I wrote about this incident, and waited for my steak to arrive.