My dad was a great storyteller and brought my family’s history to life for me. One of the stories he told me was about my great-granddad Swan and a long ride he took looking for blizzard drifted stock. This would have probably been in the 1910-15 era, but I’m not sure. My great-grandparents ranched in eastern Colorado, south of Hugo and west of Boyero. It was rolling plains of stirrup deep grass at that time. Great grazing country but not much protection for stock in a storm. There had been a blizzard of several days and when it finally broke, the majority of the ranch’s cattle and horses had drifted away. The horse business was a big part of the ranch and there was a good sized band of quality broodmares that were missing.
Great-Granddad had a stud that I believe was of Thoroughbred blood by the description Dad related. The stud was Great-Granddad’s top horse and was used regularly, so was fit, grain fed and had been in the barn during the storm, so wasn’t in the big drift. Great-Granddad took some food and necessities and started off in the direction the stock had drifted according to the wind on that stud. He crossed over into southwestern Kansas before he started seeing anything with his brand on it. He had to ride further for the horses and when he quit seeing anything with his brand, finally turned back and started gathering them up. He had to ride through every bunch along the way to check for his. Though his stock was clearly branded, more than a few of the people along the way had hoped to keep the ones that had wandered in on them. The horses were of such good quality that it would make anyone a bit of a thief I suppose. So, Great-Granddad didn’t get a really warm reception from many of the landowners, though some were gracious enough to invite him in for a meal and to let his horse eat and rest. 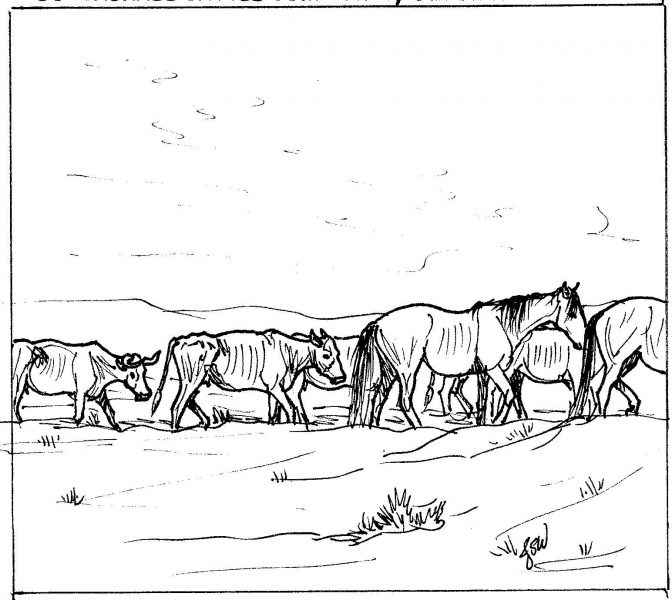 The horses were at heart home bodies, so they headed back to Colorado pretty willingly. The cattle, as he picked them up, were tired and had a harder time of it during the storm, so they didn’t travel out as well. So, letting the horse herd break the trail, Great-Granddad kept the bunch going, day after day, bedding down wherever they were at dark. The horses would paw the snow and the cattle could graze behind them, so, they got along okay. Great-Granddad was just plain tough, so apparently he did too.
After many days, he finally got everything home and had surprisingly few missing as he had gleaned stock out of many bunches on the way. Some had died, of course, not to be found until the snow melted. He also picked up stock from his area and took them back to their owners. Strangely, Dad said he was the only one who had gone in pursuit of them. Perhaps everyone just assumed that he would be going after his. Due to no communication they couldn’t have known that for sure though.
After a round trip of well over 300 miles, breaking a trail through deep snow and sorting cattle out of bunches along the way, Great-Granddad’s stud was still solid under him. I’ve never seen a picture of that stud, more’s the shame, but I’ve seen pictures of Great-Granddad and he was a man with a firm jaw, dark hair, stern eyebrows, and brown eyes that looked like he would take on anything. He was a tough man in a tough time and bred and rode horses that matched him. I have to wonder how many people nowadays would head out into that white world in pursuit of stock with no idea where they had ended up. How many of the studs of today could have made that trip and come back with more in the tank, so to speak?
The fortitude of that generation is sure admirable. Not to be forgotten is my great-grandmother at home with a bunch of little kids, wondering when and if her husband would be returning and, if he did, had he found their stock and their livelihood? That would have been a tough wait. The not knowing, due to no way to communicate, would have been terrible. I sure admire my ancestors who ranched in that era. Tough people and well prepared for the life they led, and the good horses they raised helped them do it.