A GoPro Goes to the Rodeo

This year, I had similar plans. I was headed to the rodeo, but not as a spectator. I had a GoPro, and it was my job to sweet talk as many Black Hills Roundup contestants into wearing it as I could on behalf of Tri-State.

Now, before I jump too far into this tale of thrills and spills of my GoPro rodeo (GoProdeo?) adventures this past Independence Day weekend in Belle Fourche, South Dakota, I should admit that I had only affixed a GoPro to a human who was relatively planted on the ground and a few dogs bee-bopping around prior to heading out to the rodeo grounds on July 1. I had also never been to a rodeo as a media personnel.

I was absolutely prepared and not nervous whatsoever.

The first night of the Black Hills Roundup was the ranch rodeo. I scouted the 12 teams inconspicuously behind a camera from the back of the roping boxes while the announcers introduced each team. I quickly decided who I thought seemed the most laid back and amenable to GoProdeoing. (Yes, I judged them. I also said a prayer. I think God and I are good again.)

First up on my list to convince: A team in pink with a line of Bud Lights sitting just outside the warmup arena.

“Hey boys, who here wants to get their branding rides on tape with this GoPro?”

Impressive. I had just cued the crickets to loudly chime in on the exact moment I was able to quiet down the most rowdy guys I had scouted out.

Just like that, I had my first contestant in a GoPro. 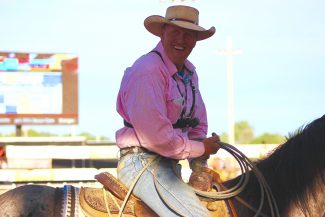 Vern Ward of the Ward Ranch was a great sport and, from what I could tell, thoroughly enjoyed wearing the GoPro during their branding ride which landed them in the top 3 of the event with a time of 37:53. Ward was convinced the GoPro was lucky and, as any gentlemen would, told me to share the luck with other teams as he handed it back. Unfortunately, though, I didn’t use the right mount in combination with the chest strap. The angle of his entire ride was pretty much on his hands and the back of his blue roan’s neck, as you can see in the video.

Lesson one: Don’t point the camera at the rider’s hands. Fix that mounting strategy. Also, beer can sweeten any deal.

Next up: an auspicious crew in sport coats, ties, and orange shirts, who, so long as I held their beers and phones, agreed to strapping the GoPro to one of their guys during the wild cow milking. I asked one of the wranglers to wear it for what I had in my mind to be an awesome vantage point. 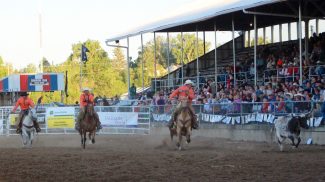 By this point, the announcers had honed in on the presence of the GoPro. When Justin Collins strutted into the arena aboard his bay steed donning a chest mounted camera, it was pointed out to everyone within earshot of the speakers that “Tri-State was up to something down there with that GoPro”.

Good, I thought. Even if I don’t get a lick of good footage this entire weekend, I’ve given our company some good notoriety.

Next thing I knew, Collins was penned up against the concrete wall by a rather angry horned cow who was having nothing to do with being milked. The three other guys jumped in to help get this cow settled enough to milk, all the while Collins was fighting at the head end of her with all his might, back against the wall.

The energy in the stadium was quite exciting as everyone cheered for the boys in orange from Black Hills Tractor/Bad Boy Mowers. By this point, though, they had blown a high placing time for this event, but they cowboyed up and put everything they had into getting that darned cow milked.

After a rustle for what seemed to last a couple of minutes, the wild cow caught Collins with a horn and tossed him aside like a piece of trash.

As Collins limped off, I retrieved the GoPro and inspected it. It had a minor scratch, but was still intact. It took everything in me not to run back to my car and download the footage I had just gotten. I had quite a few spectators and contestants ask about where they could find the footage, and I promised them they would be able to find it online soon. I was stoked!

…Until I looked at the replay off the SD card later that night. Turns out, as Collins was entering the arena, in what I am sure was a collaborative effort between him and I, the camera got turned off.

None of that epic footage was caught by the GoPro.

Lesson two: Don’t fiddle with the GoPro once its attached and recording.

Not long after the epic cow milking spill, the GoPro died. I had a couple guys lined up to wear it during their bronc rides, but I didn’t have a backup charger with me (another lesson in itself: the portable charger is a non-negotiable in my media pack). I didn’t get anymore videos that night, but enjoyed taking pictures and holding beers for the rest of my evening.

The rest of the weekend was everything I anticipated it to be: impressive rides, great energy, salty rough stock that posed quite the challenge for many contestants, and a sense of urgency from every PRCA rider, regardless of event. As such, I had considerably less luck finding contestants to GoProdeo than I did the night of the ranch rodeo.

I did strike a lucky cord, however, with a sweet blonde gal named Polly from Missouri. I met her while she was warming up during the calf tying, which paid off as it took us a few minutes to get the GoPro rigged. Thankfully, her steed “Ruger” was fairly patient with us as we devised a rig plan, especially given that he was warmed up and ready to run.

After considering all the mounts and rigs I had on me, she decided that a hat clip affixed to her hatband would give us the best angle of footage and be the least distracting.

“Do you think it will fall off?” Polly asked.

“I don’t think so, but maybe try jamming out as if you were at a rock concert and see what happens,” I offered.

And just like that we had a GoPro tumbling down the shoulder of her horse and onto the dirt.

That was the ticket. We determined that, at least, if her hat flew off, the GoPro would stay on and someone would retrieve her hat, saving me the trouble of trying to get back into the arena and find it before it got trampled. 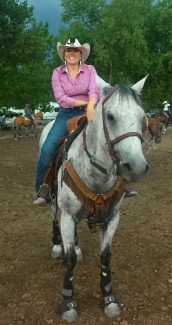 The rubber-band-hat-clip rig worked pretty well up until she was coming into the third barrel in which the GoPro fell loose and started flopping around like Polly had caught a fish from the sky.

As you can see from the video, the rubber bands saved the GoPro’s life. Actually, I am sure it would have been fine if it had taken a dive in the middle of the run–it survived a one-on-one interaction with a wild horned cow– but the bands certainly saved me the trouble of retrieving it from the arena during a full night of events. It didn’t make for the perfect footage, but, so long as you don’t get motion sickness easy, the first couple barrels were great!

Lesson three: Pack rubber bands and/or hair ties. Maybe consider using vet wrap around the hat clip when it is affixed to anything.

As you can see, my GoPro mounting scheme has plenty of room for improvement. I had a couple other valiant efforts throughout the weekend, including mounting the GoPro to the helmet of a 2 year old mutton buster who was in it to win it (the camera popped off two bucks out of the shoot, but the little buckaroo put on quite a show riding well past 8 seconds). Like all good things, though, it’ll come with time. Be sure to follow our YouTube page to chart the GoProdeoing progress!

A native Texan, Danielle recently relocated to South Dakota to get married after finishing up a master's in agricultural communications at Kansas State University. While she did not grow up on a ranch, she has taken every opportunity afforded to her to be apart of...

View all posts by Danielle Schlegel