All winter we had kept the water tank full for the bulls in the bull pasture. When spring came and the ice went out on the dam, it was one more chore we were glad to stop having to attend to,what with calving and everything else to do, so we shut the tank off.

On that place, we had all big bulls, as the younger bulls were at the headquarters about 75 miles away. Those big bulls were at least three years old, mostly older. Charolais, Simmental and a few Angus, they were huge and they were tough. They fought all spring, of course. They spent their days tossing each other around, yelling insults at each other, and tearing up the sod.

It was quite a surprise, therefore, when they started coming into the windbreak corral and standing around and not doing much fighting. It was late in the day when I first noticed them, so decided that they could stand around wherever they wanted to as long as they were all there, which they were. The next morning as I rode out to go through the springers and move some pairs to a different pasture, the bulls were strangely subdued out in the pasture. I got my little circle made and rode back by the bull pasture. They were walking around and bawling, but not fighting or talking smack. I stopped my horse to watch as it was completely out of character for them.

I observed a really big Charolais bull approach the nice big dam in the pasture. He got nearly down to the water, when a big Canada goose exploded out of the cattails and flogged him on the face. The bull whirled away with the goose pounding on him. The other bulls whirled and ran as well. It was funny as heck to watch a goose completely whip a ton plus bull. I needed some amusement after almost two months of calving and no sleep, so I watched a while.

Every time a bull approached the shore of the dam for a drink, a gander would build to him. I finally determined there were at least eight nesting geese around the dam. The bulls kept trying for a drink all the way around the dam, but alas, not one succeeded in getting more than a sip before being attacked.

I rode over and turned the water on to the tank. That’s what all the moping around had been about. Poor big guys were thirsty! I let the tank get plenty of water in it for everyone, then I rode out around the bulls and drifted them to the water tank. I stayed plenty far from the shore of the dam, as I didn’t think I needed to see what a goose would do to my horse and I and I wasn’t in the mood for a bronc ride.

Until the eggs were hatched and the goslings and their protective parents could swim out into the dam itself, we kept that tank going. No use thirsting a 2300 pound bull to death because of a bunch of very protective Canada goose ganders. As the saying goes, “It’s not the size of the man in the fight, it’s the size of the fight in the man.” A goose will certainly prove that true. 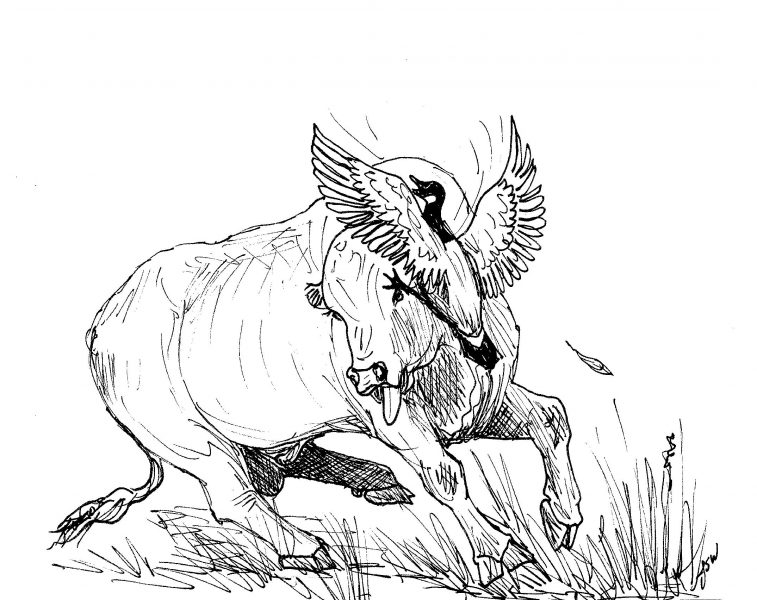