Good Neighbor To The Rescue

I was still in high school and living at home, doing all the riding on my folks’ place, plus my summer herd cattle. On the day remembered here, Dad had sent me to go get a bull and bring him to the corrals. I think he was going to haul him to the sale barn.

I saddled a really broke, reliable, bay mare called Brandy. I knew if I couldn’t gather and drive that bull home with her I wasn’t capable of doing it. I knew the bull well enough to know that he wasn’t going to be overly cooperative and would probably get on the fight when I took him out of the cows. He was four or five years old so we had some history at this point.

I left the gate out of the pasture open so I could take him straight through it and out into the next pasture. He was blowing snot and bowing up at me every little bit, but I took my time, trying to keep him as quiet as possible as he was a big bull and could be really dangerous. Brandy was keyed into his every thought and move and we were making progress. After pushing him out into the next pasture, I let him sulk while I loped back and shut the gate behind us.

It was only about a half mile to the corrals by this time and I would have felt like I was winning, but I still had to get him through the creek bottoms and the willow thickets to get him in the corrals. I was sure missing the good ranch dog Mandy who usually helped me, but she was laid up with a broken leg, so it was going to be trickier to get through the creek than normal.

He huffed and puffed along toward the creek, and made another dash for freedom. I headed him again and when he finally turned, he made a run for a deep creek channel that was absolutely clogged with willows and trees, plus boggy and with hidden holes. He plunged deep into the thicket and turned to taunt us, shaking his head and making threats. Brandy and I sat there, catching our breath, while he stood within the willows, just daring me to follow.

What to do now? No way was I going to get off my horse and try to push him out of there and it was nowhere to take a horse. I was sitting there on my sweaty horse longing for that good dog that was at the barn in confinement. She could have gotten him out of there quickly and made him look forward to being in the corral.

Suddenly, Brandy shied a bit and let out a snort at something by her. There, right below my right stirrup, was the neighbor’s double tough Border Collie male named Coke. Coke was an outstanding dog and I’d worked with him a lot helping the neighbors. What he was doing there though, defied logic. It was over four miles to their place. Why had he showed up just when I needed him to? I sure hadn’t called his name, though I had brought up the bull’s heritage fairly loudly a few times. But, there he was, nonetheless, eagerly awaiting the go-ahead on fine tuning the bull.

When the bull had cooled for a few minutes and my horse had caught her breath, as well as Coke who had loped four miles to get there, I positioned myself where I thought I should be. I sent Coke into the willows and told him to get ahold.

The bellering and crashing of willows lasted but a short while and the bull shot out of that thicket and headed across the meadow toward the corrals, nose ears and eyelids bleeding. Coke ranged out and stayed in the right spot, so Brandy and I just followed along. The bull crossed the creek again but chose to avoid the willows and trotted right through the gate into the corrals.

When I had him safely in a stout pen with the gate shut, I rode Brandy to the saddle shed. When I got off I sure gave Coke a good petting and lots of praise. I thanked him for showing up when he did and being such a good boy. He took it like the professional he was, lolling his tongue, grinning and wagging his tail.

That was the first time Coke showed up like that, but not the last. It was almost like he read my thoughts over the miles, and until our good dog was healed up, he was my sometimes helper when I needed him most. Good neighbors are so wonderful, whether they have two feet or four. 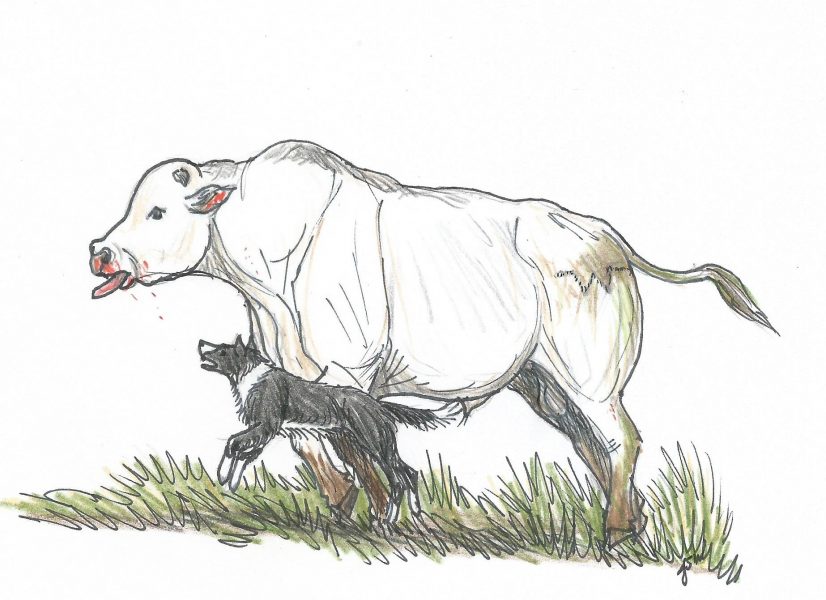