Good Manners In One Lesson

Years ago, I had a really outstanding gray Hancock/Bill Cody bred mare that had done every ranch job possible and done them all well. Consequently, when she reached her mid-teens, she had earned the right to raise some babies. This mare, Cody, was the boss mare on the place and second in command only to my old gelding, Kelly.

She was a good alpha mare in that she kept order in the bunch without being a bully. The drawback to her status, however, is that her foals quickly learned that they could start a scrap with someone else and she would quickly bail them out if they overmatched themselves. Her foals would even try to bully the mature horses in a band. The other horses soon learned to put up with the little brats and not even give them a dirty look for fear of bringing Cody’s motherly wrath down on themselves.

Oddly enough, Cody was even the boss mare in the big band of mares at the stallion owner’s ranch where I took her each year for breeding. She was only there for a few months of the summer, but, when she arrived, the whole dynamic of the herd shifted and she was the boss mare.

Her first foal was a filly and she’s another story unto herself as far as being a spoiled brat as a youngster. I’m going to tell you about her second foal, a fabulous blue roan stud colt who had the credentials to remain a stud in his future. Jay, from the start, thought people were wonderful. He was gentle natured and smart, which went well with his blue roan color and pedigree. I loaded Cody and the month old Jay in the trailer and hauled them to the ranch where they would be turned out with the band of mares and Jay’s sire.

In a few months I got the call that he was going to gather the mares and that I could come and get my horses. When I arrived, I noticed that Jay was sure thinking he was some punkins when I went to catch his mother, but he followed her into the trailer and let me rub on him a little, seeming to remember well how nice people were after all.

Upon arrival home, I put them out into a big grassy lot by the corrals so that I could handle the colt a little bit every day. He sure was thinking he was a stud horse, complete with marking piles and all the studdish behavior that even a four month old colt will sometimes exhibit. He picked at his mother, and being the patient, baby loving soul that she was, she put up with his nonsense. He was kind of a pistol toward me, which I didn’t put up with, but I could see that it was a problem that needed some work.

I caught my gelding Kelly, knowing that he would never hurt the colt and that he probably wouldn’t put up with his orneriness either. He had no fear of Cody, so would be a good companion for the blossoming stallion prospect.

I was working outside and was watching the three out in their lot. Jay, having tired of picking on his mother and curious about this new adversary, had started messing with Kelly. Kelly ignored him when he nibbled his ears, nipped at his hind leg and danced around him. Feeling bolder, Jay kept escalating his assault. Finally, not getting any response from Kelly, he whirled around and kicked Kelly hard with both hind feet. Now Jay was just a weanling, yes, but he had a butt on him that put a lot of power into that kick to Kelly’s neck. I know it sure smarted, and Kelly had had enough.

Whirling toward Jay, he grabbed that colt about six inches behind his ears and picked him up off the ground. Jay’s hind feet were just touching. Jay squalled like a shoat and Cody threw up her head to see what had happened to her little angel. She nickered at him and trotted to within 20 feet or so of Kelly, but didn’t come any closer. One could see her practically “wringing her hands”, but she wasn’t going to tackle Kelly for love or baby. 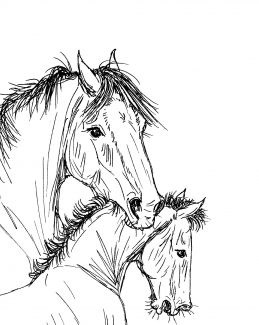 Jay piddled down his hind legs and had his baby mouth going before Kelly put him down. A scared Jay ran to his mother and stood trembling by her side. Kelly resumed his grazing.

I went to see how much damage had been done to that pretty blue hide. Not a mark. Just spit and grass. I was sure relieved. What it had done, though, had put Jay in his place. He ever after had wonderful manners and was a pleasure to work with. He never tried to bully anyone else, was even nicer to his mother, and quit the nonsense of acting studdy all the time.

He went on to become a top heeling and calf roping horse, fantastic sire, and all around good guy. He’s an aged stallion now and he still has those Kelly manners that were applied with one treatment.