Penny and I were foaled/born on the same year. She was a June foal, me a November. When she was four and I was a coming four, my oldest brother put us together and she took good care of me. She was the kindest, sweetest, gentlest horse ever and she spent her years hauling me around when I was small, packing any town folks that came to visit, and also being used as a ranch horse by anyone who needed her.
She was a dark golden buckskin and the full sister to my Dad’s horse of a lifetime, Reno. Her status was pretty high on the ranch, so, when she wasn’t being used much anymore, she finally got the opportunity to raise some colts. It took a few tries before she finally took, and due to that, she only ever got to have two foals. They were both good, solid horses so she bred true.
This story, though, isn’t about her long career as a saddle horse, but about the two foals she raised. I was in high school when she had Sailor, a palomino colt. I watched him born so he and I bonded early. He was really tall at birth and matured at 17 hands even. As a baby, he was gentle, trusting and polite. He didn’t pick on his mother and she was just crazy about him and an exceptional mother. He grew fast and strong on her ample milk, and as happy as they were, weaning time ultimately came in the fall.
Sailor was weaned in the company of a gentle gelding and Penny was turned out in the pasture. She had an absolute fit about being separated from Sailor, more so than he even did, and mourned for days over it. For weeks she barely left the corrals to graze and lost some weight as a result. She whinnied until her voice was raspy but, finally, she gave up. She still hung close to the corrals, just in case, and it was probably a month before she rejoined the saddle horses in the pasture. It was a tough go and I felt bad for her.
Her second foal, whom I also got to watch be born, was a sorrel filly who was named Snickers. She was a pretty little thing, refined and leggy, and a doll around people. However, she was a total stinker to her sweet old mother who was crowding up on 20 years old. Snickers would bite, kick, paw, push, and pick at her by the hour. She clearly needed playmates, but she was the only foal on the ranch. Penny patiently put up with her, never so much as giving her a cross look. An old gelding called Lobo was smitten by the little brat and while reaching across the fence to try to touch her with his nose, he fell over
the fence and ended up with her and Penny. It was a huge treat for Penny, as Lobo would stand guard over Snickers, put up with her shenanigans, and adoringly gaze at her day and night. Penny could slip away and graze out of sight and in peace, as Lobo was the new target of Snicker’s orneriness. 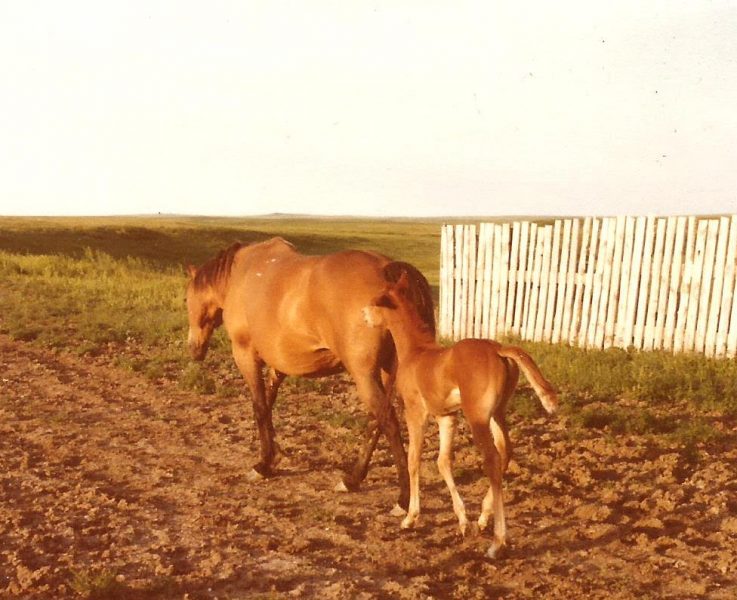 The bratty filly would bite her mother as they walked along.

When weaning time came, I figured there would be the same dramatic separation anxiety as there had been with Sailor. Boy, was I wrong. Snickers was “weaned” with Lobo in the corral and Penny was once again turned out into the same pasture as she was with Sailor. She never looked back. She went clear to the north end of the pasture, out of sight of the house and a good 3⁄4 mile away, and stayed there. I think she must have snuck down in the dark for a drink in the furthest north dam, as she was never seen in the daylight anywhere but in the north draw. Her bag was just as big and tight as it had been with Sailor, but that Mother Love was definitely worn out. She was absolutely done being Snicker’s mother and was
relieved to be away from her.
I don’t condemn Penny for that. She did a great job with her ornery daughter while she had to, but it was just time to be done putting up with her. Lobo dealt with the weaning tantrums that the filly threw, Penny wasn’t there to see it. She’d done her time.