Girls Can Shoe, Too

When I left my California home to cowboy in Nevada in my early twenties, I took my dad’s old horseshoeing tools and a basic knowledge of how to use them. My dad showed me how to trim, rasp and level a foot, but we got cut short on time when it came to the lesson on nailing the shoe onto the foot. I’d heard stories from older cowboys who said the first time they shod a horse their chinks were covered in blood, or all four shoes fell off by lunchtime, or the horse was lame for a month afterward. I figured I could do at least as bad as that, so I packed my old G.E. tools into a rusty metal box and headed east.

The first time I had to shoe a horse in my string, my boss watched me level a foot and declared me Farrier’s Helper. For the next several weeks, I helped him trim and level every foot of every horse he shod, even ones that weren’t in my string. I worked up to nailing shoes on the gentle ones and never drew blood, so I thought I was ready to shoe a horse on my own.

The first time I shod a horse all the way around, I was so excited I took up two spots on the couch when I watched TV at night. I had to call a friend and brag a little.

“I shod a whole horse for the first time last week,” I said.

“Of course not!” I replied. “I did half on Monday and half on Wednesday.”

The front feet took me roughly 3 hours, give or take 45 minutes. The hind feet took me approximately 2 hours, so I counted that as progress. My speed would have been improved greatly if a) I wasn’t required by the company to use used shoes, and b) if I was conditioned and in shape for the task. More than once, I had to suppress a deeply felt urge to lay down on the barn floor and gasp for air.

I developed a unique method, not currently taught at any professional horseshoeing school, of rasping a foot until I could no longer stand, then tacking a shoe on. I wasn’t afraid to set the foot down and rest in between nails, either.
I thought I would feel immense and complete satisfaction after tacking iron on a horse in my string, but after I clinched my last nail and straightened my back, I didn’t think, “Wow, check out what I did!” Instead, I felt the onset of total-body soreness, surveyed all the faults in my shoeing job, and thought, “Oh, crud, I hope nobody looks at his feet.”

But, that shoe job lasted for a couple months and never crippled Owyhee, my test subject. At that point, “sound” and “still there” were pretty much my main two requirements in a shoeing job I claimed in public. In the future, I plan to add more, such as “does not look like a beaver chewed on the front of his hoof” or “nails organized into a tidy row, not staggered for strength.” 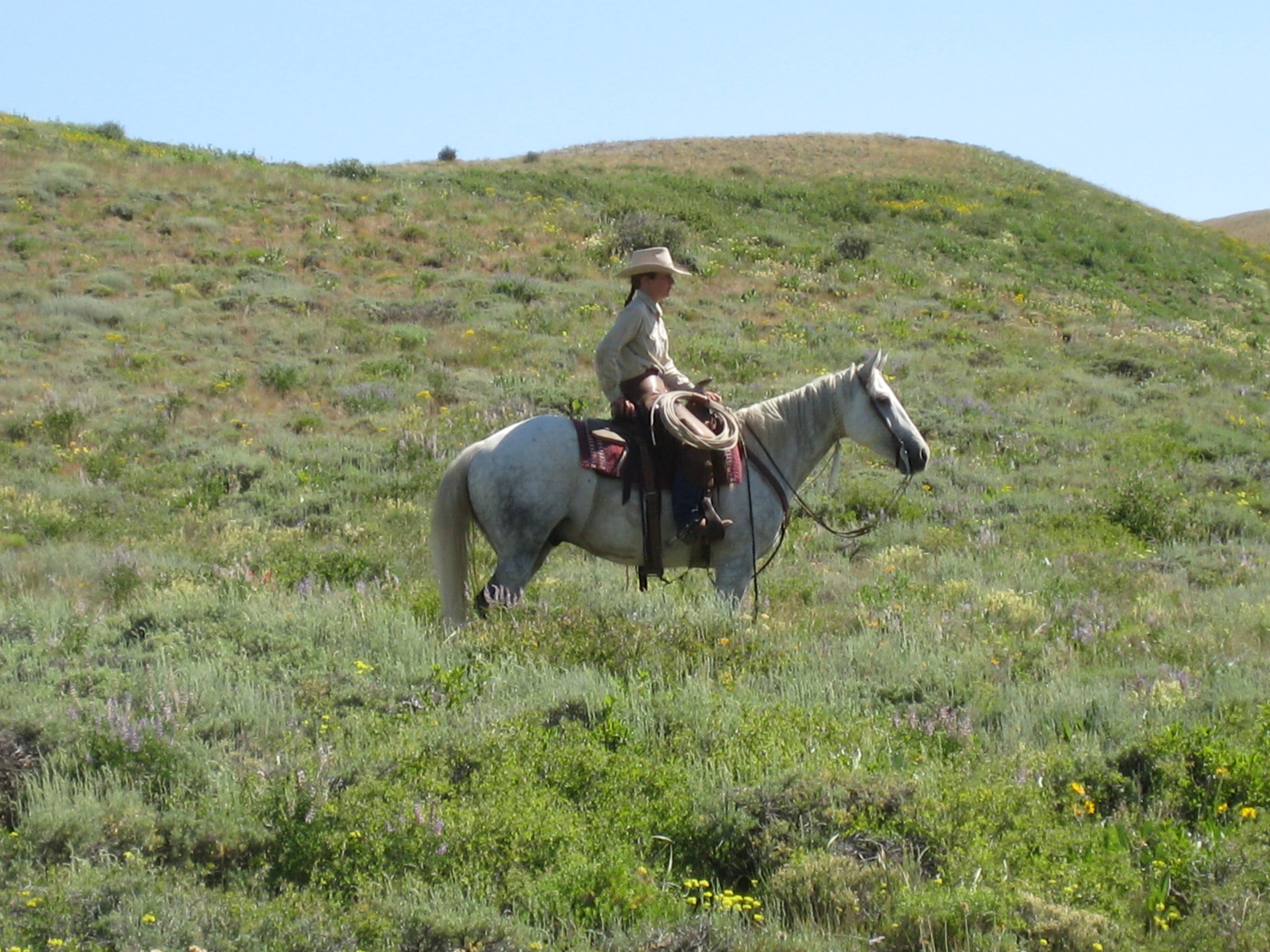 Regardless of how the finished job looked, I was pretty dang proud to cowboy on a horse that I had shod myself.

For the last couple years, my shoeing career has been put on hold. My husband, Jim, jokes that he started dating me because I rode colts and could shoe my own horses, but all my shoeing tools mysteriously appeared in his shoeing box soon after we were married. I told him “Well, mister, that’s what you get for being so irresistible that our full-term baby was born four months after the wedding.”

Morning sickness and shoeing don’t mix, and now shoeing while keeping an eye on a toddler don’t mix. Once our daughter gets old enough to keep herself out of kicking range, I’ll pick up my shoeing tools again. I liked riding a horse I had shod myself, and it’s definitely a chore that’ll keep a person toned without ever buying a gym membership. 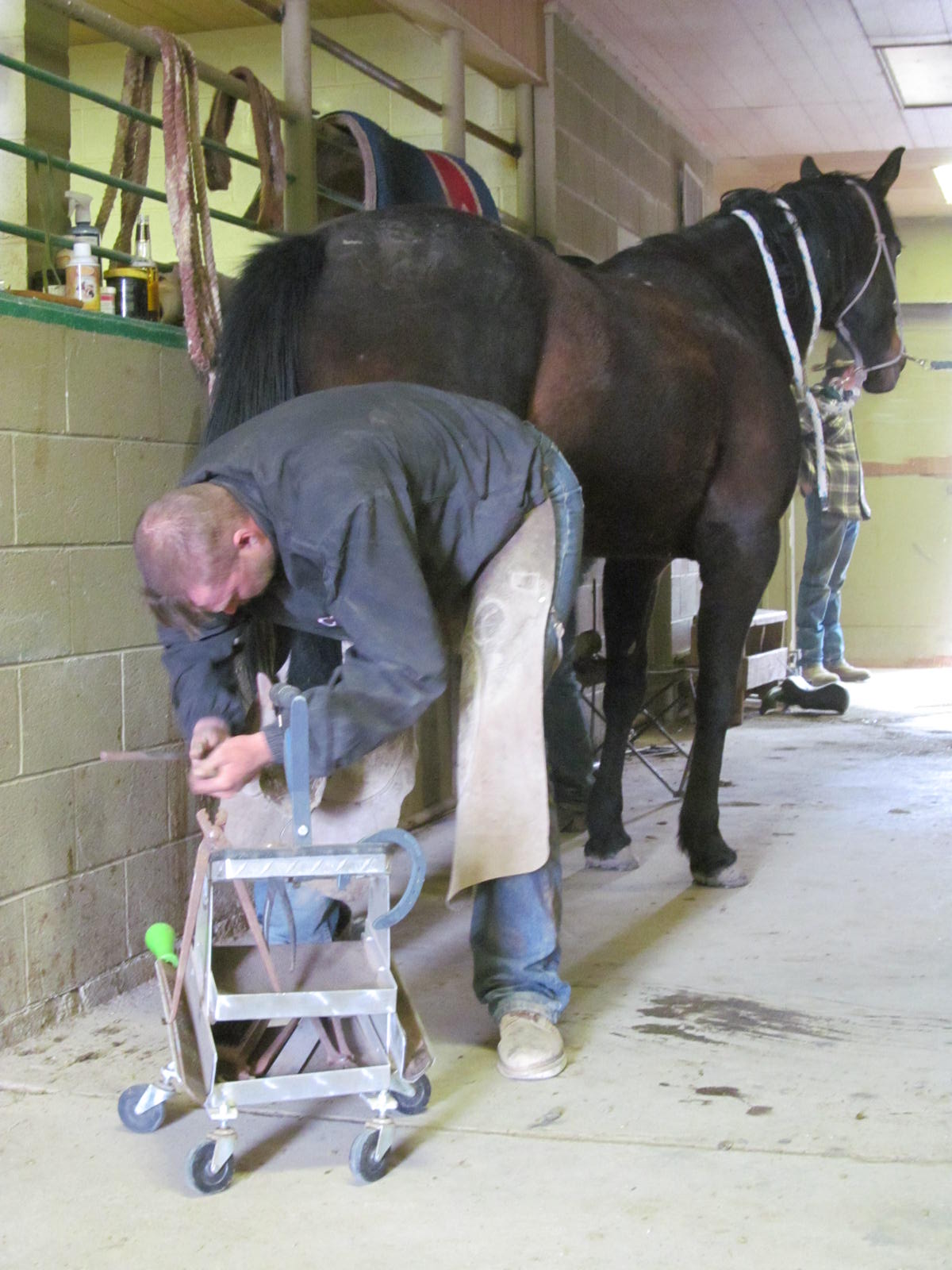 These days, this is how I shoe horses. Doin’ good there, honey! Don’t weaken.

Until I start doing my own shoeing again, I’m grateful for my husband’s awesome (read: extremely particular, bordering on anal-retentive) horseshoeing skills. I only ride a few times a year during this phase of my life, and I’m lucky to hop on a well-shod bridle horse when I do. I just hope he sharpens my hoof knife before he hands my shoeing outfit back.