Fox and The Scary Mineral Feeders

I was riding on a big yearling deal years ago and in one of the pastures the owner had put out those mineral feeders that have the top that protects the tub’s contents and turns in the wind. One horse in my string was not the sharpest individual, plus he didn’t see very well, so he was suspicious of nearly everything. Nothing on earth, though, was as downright scary as those mineral feeders.

Every time I rode him it took me a long time to get him close enough to the feeders to check the level of mineral in them. Being on the northern plains, a day without some sort of wind was rare indeed, so those evil feeders haunted ol’ Fox endlessly with their unpredictable turning back and forth.

After the entire summer I had gotten him confident enough to get up to within 10 feet of one so I was making progress. I’d just let him stand there, petting him and letting him know that he was doing the right thing. He would shake and blow, ready to spring away if a butterfly so much as flew by.

Finally, one very hot August day, there was not a breath of wind stirring. Fox was sweaty and tired and I thought that if there was ever a time to let him sample what was actually in one of the feeders, that day was the day to do it. So, we did our usual sneak on the feeder, Fox blowing through his nose with every step, until we were right in front of the opening of the feeder. He could smell the salt/mineral mix in the thing and was even licking his lips a little in anticipation of how it would taste. I encouraged him to step just a little closer so he could put his nose into the feeder.

Just as he put his head inside and touched the contents, one of those odd, vagrant little whirly winds that you can barely feel hit that feeder hood and it spun around, soundly smacking Fox on the neck. He blew out of there like a demon had ahold of him and we went backwards, then sideways, then straight away for several hundred yards before I got the runaway stopped.

His confidence in my judgment in situations was not going to ever be the same again. The formerly scary mineral feeders became even scarier monsters to him and no amount of effort ever changed his opinion. I’m sure he had nightmares about them ever after. 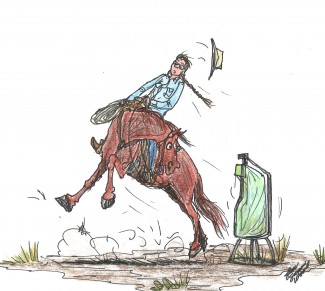