In part two of my dissertation on form to function conformation, we will go to the legs on the horse. The old saying “no foot, no horse” is pretty true, and the legs are as important as the foot. I read somewhere years ago that the Bedouin tribesmen would hang a curtain and stand a horse behind it with just the legs, from the knees/hocks down, exposed. If that part of the conformation didn’t suit them, they didn’t bother to look at the rest of the horse. Their very lives depended on horses that could travel for days on end, in tough country, and carry them comfortably. More’s the pity that we don’t do that as horsemen here in this day and age.

Everyone knows of someone who had a horse with terrible legs that was never unsound. I have had those horses too. It’s great that they were able to carry on a career in spite of a bad set of legs. However, it’s better to start out with a good set of legs on a horse. Enough can go wrong with a horse without asking for problems brought on by bad legs.

I like a horse that stands with it’s feet square under itself, whether of narrow bodied conformation or wide. A horse that narrows down to the feet from the shoulder will put undue pressure on the outside bearing wall of the hoof. That can cause the hoof to be uneven, whether through natural growth or wear. All of the joints in between get uneven pressure too.

The cannon bone should come out in the center of the knee or hock and go into the fetlock joint and pastern straight. If it’s a gelding, I might overlook a bit of a flaw here if it’s not too bad, but a breeding prospect needs to have excellent legs. If the cannon bone is straight going into the fetlock joint, then the pastern should be aligned with the foot. A slight conformational defect in the lower hind legs is less worrisome to me than that of the front legs, since the front of the horse bears much more weight.

Lots can go wrong between the knee and the hoof, so look at those pasterns and be sure they are centered on the foot straight and that the foot is also pointed forward. Sometimes a horse will toe in or out at this point. If I have to choose one of those, I’ll choose toe IN every time. They might paddle when they travel, but it will be toward the outside. One that toes OUT will paddle to the inside and can strike their own legs or trip themselves as a result. Keep in mind that a horse whose foot turns out of alignment from the fetlock joint down is more prone to ringbone and side bone development, which can cause a shortened career due to lameness.

The angle of the pastern should be that of the shoulder, and the hoof should continue that angle. A horse that is too straight up and down in the pasterns is going to put more concussion on the hoof and besides traveling rough, will be more prone to coffin bone injuries and navicular.

The hoof should have a broad heel, rounded shape, and have the heels at the back of the foot capsule. Proper trimming/shoeing is essential to maintaining the correct angles of the foot, but it’s a lot easier if the foot starts out the right shape. Farriers, and oddly enough, veterinarians, aren’t magicians and can only do so much. A good farrier can correct some manmade problems, but not all of them if it’s been going on too long.

Hind leg conformation is also important, but as I said a bit ago, not as critical as front leg in most cases. The exception is the case of a horse with post hocks or being coon footed.

Post hocks are when a line drawn from the top of the horse’s croup goes straight down through the hock and the fetlock joint. The leg is straight, like a post, thus the term. This horse will have a harder time getting his feet up under him to stop or turn. It will cause wear and tear on not only his hocks but his stifle as well and lead to lameness as time passes, depending on the work the horse does. 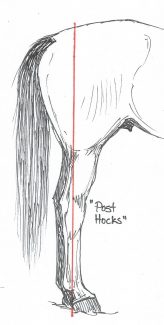 Being coon footed (old term) is when the fetlock joint almost touches the ground as the horse walks, because the hind pasterns are excessively long. This also puts excess strain on the hocks and stifles, especially if a horse is asked for hard turns and stops, as in the arena. 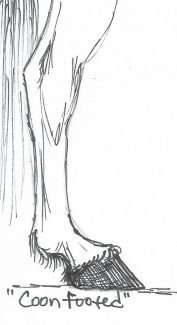 A horse that toes out a little behind also doesn’t worry me, as many really hard stopping rope horses toe out a little behind. Draft horses are more like to to toe in and some believe that helps them to pull better. Extremes either way are to be avoided.

The next segment in this series will pertain to the main body of the horse, so stay tuned.