Now that we’ve covered the head/neck and legs/feet aspects of form to function conformation, we will finish out this three part series by talking about the horse’s body from shoulders to tail head, and topline to elbow, stifle and belly.

Since the performance horse was meant to be ridden, a pretty important part of the conformation is the withers. There are many shapes and sizes of withers, so saddle gullet width and saddle pad choices are important to accommodate those variations. But, bottom line, a riding horse really needs withers. Without a good set of withers a horse spends it’s career being cinched tight to keep a saddle on. A horse with a nice set of withers can work with a looser cinch until it’s time to rope something. So, withers are a nice feature.

The shoulder that angles from those withers should be of the same angle as the hip. A long sloping shoulder is one that will allow a horse to have a longer, smoother stride. A horse with straight shoulders will ride rougher and heavier on the forehand. The long, angled shoulder will allow that horse’s front leg to extend out further at any gait, especially if the horse has a nicely set neck. 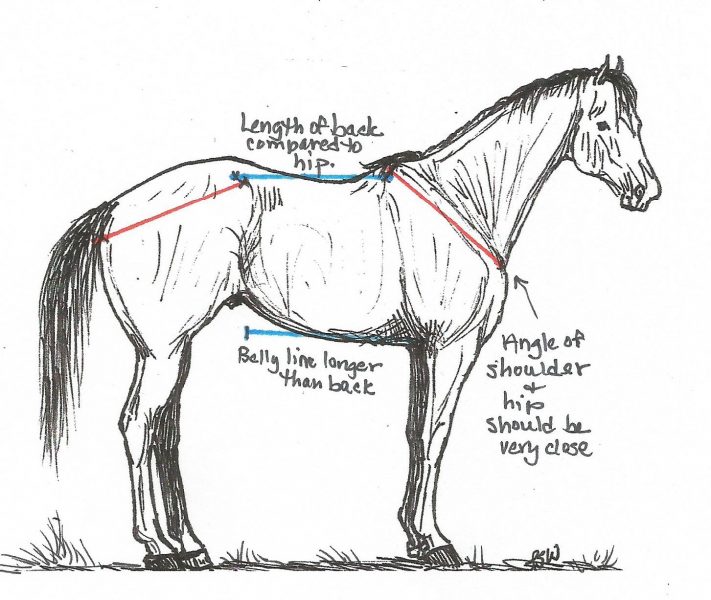 The back on the horse should be fairly short, with plenty of muscle over the loin. From the withers to the hips, that back must support the weight of a saddle and rider. A horse with a hollow back will have difficulty getting the front end out of the ground to stop and turn. Though conditioning can improve the topline on a horse, much of that is genetic. I like to see a horse whose top line is substantially shorter than the belly line.

The horse should be deep through the heart when viewed from the withers to just behind the elbow where the cinch rides. Deeper heart indicates more lung capacity and gives a horse more power in general.

The hind quarters are the driving force behind the speed and agility of a horse. The length and angle of the hip, angle of the croup, and how they tie into the loin make a world of difference in their ability to perform. Horses asked to do anything with agility and speed already have short cannon bones and low hocks, so the power above the hocks is what propels them. The hocks should be set below the longest part of the hip and not “camped out behind” the horse’s hindquarters.

I like the length of the hip (from hipbone to point of the round below the tail head) to be equivalent to the length of the back from the base of the withers to the hip. A long hip indicates quick speed and strength. Sprinters will have more hip and hind quarters than distance runners, hence timed event horses are the same. Too much muscle, as is found on the grotesquely proportioned halter horses, is a hindrance, so I steer away from the extremes.

The muscling on the hind quarters should extend well down the hind leg toward the hocks with defined gaskin muscles, inside and outside of the leg. When viewed from behind, a horse should be somewhat wider at the bottom of the quarters than at the hips with his legs squarely placed under him.

Now that we’ve looked at the horse from nose to tail and withers to heel, I hope you have gained some insight into what form to function conformation is all about. There are exceptional horses of all conformation types, but physical defects often lead to soundness problems, so for the longevity of the performance horse, the better the conformation, the more likely they are to stay sound.

Look at the overall conformation first. Pedigree and color are icing on the cake when the conformation is there.