I’m going to address a problem I’m seeing more and more in the performance horse industry and I’m sure, as will happen any time one states an opinion, some won’t agree. But, here goes. I’ve been to horse sales over the years where people have positively gotten into a “feeding frenzy” of bidding on genetics and/or color (palominos, roans and grays, currently). But, that’s all the horse had going for it. It may have had a bad eye, upside down neck, too long back, crooked legged or be post hocked, maybe all of the above, but if they were the “in” color and pedigree, they sold for a pile of money in spite of the conformational faults that would preclude a successful career. At the same sales, I’ve seen conformationally correct, even exceptional, horses of a less popular color (sorrel or bay usually) bring next to nothing.

Horse conformation is different between breeds, but, in the performance horse, whether arena, ranch or racetrack, form to function conformation is important. All the genetics and “who his grandsire is” won’t overcome poor conformation. Initially, poor conformation can make a job harder for the individual horse to perform, and in the long run, it leads to soundness issues. Worst of all, it’s highly heritable.

So, let’s start at the part of the horse that walks through the gate first: head and neck. I like a pretty head on a horse, but moreover, I like an intelligent head with a big, kind eye. I’ve ridden some horses so homely that their mother’s barely liked them, but were really good horses because of their brains and attitude. Likewise, I’ve ridden some pretty headed dinks with a less intelligent eye and a bad attitude. I will avoid a horse with a narrow head and flat eye, though, as they are generally less trustworthy due to their eye placement. They are spookier because their vision is impaired to the back of them, and guess what, that’s where you are when you’re riding them. So, look for a broad forehead and eyes out on the “corner” of the head.

So, let’s move on to the neck. I know of several really outstanding performance horses, stallions specifically, that have won big in the arena in spite of having a bad neck, so I know they can perform with one. But, it’s harder for them and it leads to soundness issues later on, such as loin, stifle and hock problems. A horse’s neck, in order to carry their head properly, to be collected and able to move their bodies easily, needs to have a longer top line than underline. This makes it possible for a horse to flex at the poll more easily and give his nose in the bridle. The throatlatch also needs to be clean enough that he can flex as well. An upside down or “ewe neck” as the oldtimers called it, causes the muscles on the bottom side of the neck to overdevelop, thus making it hard for the horse to bend and flex. A horse with that neck will generally have their nose out further, even to the point of carrying their head nearly horizontally to be comfortable. When you ask that horse to flex at the poll or bend laterally, their head will come up, nose out, and brace against the bit to find the balance they need. This in turn hollows the loin and disengages the hind quarters. 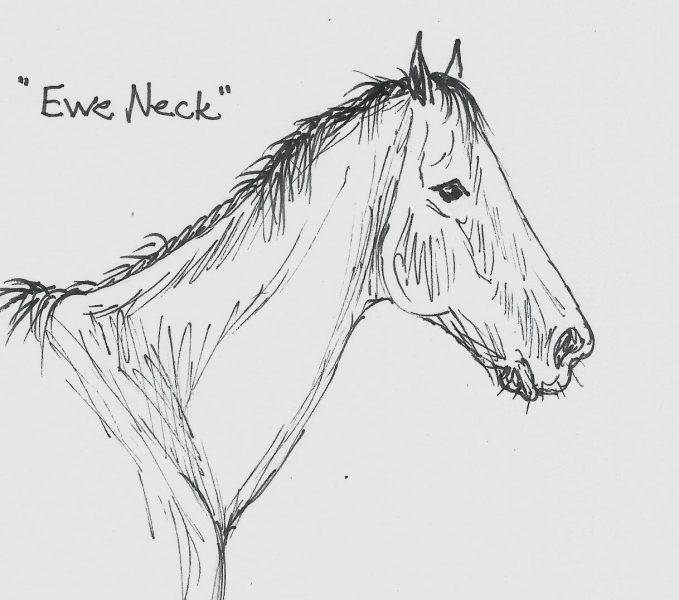 As the neck goes into the shoulder, there needs to be definition between the two. I’ve seen some horses that it appeared the neck just blended into the shoulder clear down by the forearm. No definition whatsoever. I call that a drafty neck. That neck is perfect for a horse wearing a collar and pulling heavy loads, but I sure don’t want my saddle horse to have that neck. The shoulders have to be able to move easily forward and that thickness at the base of the neck inhibits that movement. Those horses can be very heavy on the forehand and naturally work more off their front end than hind end, making it harder to turn correctly, thus harder to train for events requiring sharp turns, such as barrels or reining. 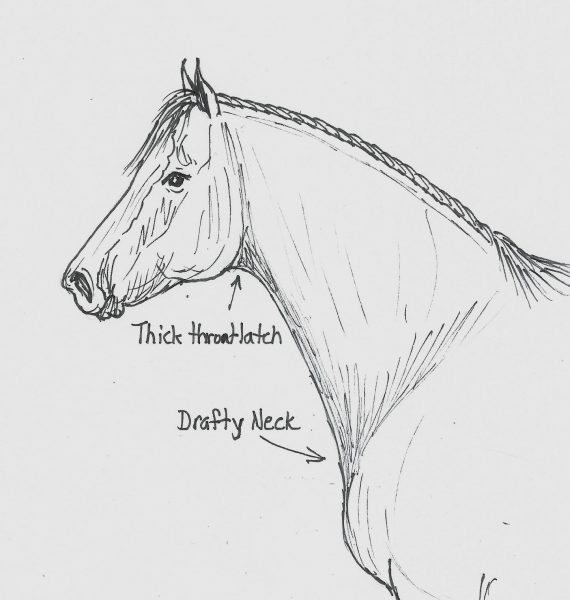 When you’re looking at a prospect or a stallion, study every part. Don’t get hung up on color or pedigree but really study the horse. Start at the head, check out the eye placement, make sure that neck is on right side up and ties in cleanly to the shoulder.

That’s it for segment one of “making people mad with my opinion” and form to function conformation. I’ll address the rest of the horse in the next segment.