Foggy weather can be a real problem when there’s work to be done. Trying to gather in heavy fog is nearly impossible and if you don’t know the country, you can be riding in circles while trying to gather.

My five year old son and I had finished up some daywork elsewhere and still needed to gather our cows into a small trap to ship calves the next day. The day had been hazy and cold and by afternoon, foggy weather had rolled in which made driving to the pasture challenging. But, we got there, unloaded and mounted up. My little son hadn’t ever ridden in fog before so was quite concerned about it. I assured him we’d be fine and set the gates to gather into.

I knew the pasture the cows were in like the back of my hand. I’d started riding on summer herd cattle there when I was 12 and had been over every square foot of it and knew every rock and gully in the pasture. As we rode away from the corrals, I did the high call that I used on the cows to gather them from the furthest reaches in the winter. Foggy weather kind of dampens sound, but I knew that if any of the cows were on the western half of that pasture, they would hear it. I was sure hoping they were. I also knew that with it as chilly as it was, their hearing would be enhanced by their longing for a feeding of cake.

We hit a trot to the north and every little bit I’d call again. Colin kept wondering out loud if we could ever find the cows since the visibility didn’t seem to extend much past the ears of our horses. We topped out on a low ridge that was south of a good dam and I pulled up. I called again and heard a faint answer off to the northeast. I took Colin on down the ridge and told him to stay right there by the dam, which he was pretty amazed that I’d found just where I told him it would be.

I wanted to hit a lope and his old horse couldn’t lope with the big mare I was riding so, leaving him there, I headed off to the northeast. I did a few more calls and had the cows coming to me. When I finally saw them walking west I quit calling and drifted off to the side and kept trotting, taking a tally as I went. They were strung out for quite a ways as they’d gathered from being spread out grazing. The big calves were all there but not understanding what the hurry was, some were lagging along, grazing and not keeping up with the cows.

Once I knew I had everything, I got behind the calves and gave them a little push to catch them up to the cows. When I got to the dam where I’d left Colin, his eyes were really big and it was clear that he had been worried that he would never see me again. The cows had found him and were just standing there around his horse, waiting to see what was going to happen next. Being nervous, he’d probably been talking to them, and several of them were gentle pets that would eat cake out of a little boy’s hand. 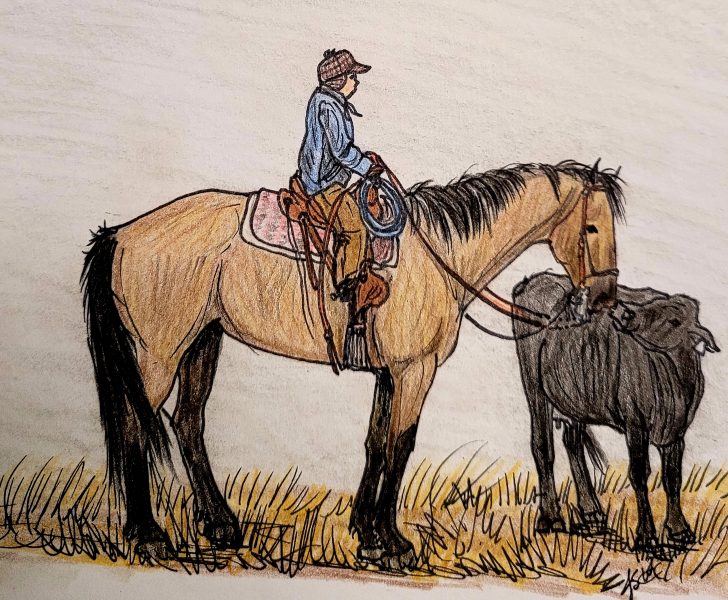 We got them moving again and headed to the trap. He expressed concern that we might be going the wrong way. I told him if he would watch, he’d see two big rocks and that we’d go by them on the left. Sure enough, he hollered from his side of the bunch that the rocks were there. It seemed to reassure him that I really did know where we were and which way to go.

After what probably seemed like forever to a little boy, we got the cows to the gate into the trap and they filed through. I had him watch the gate while I rode over to the pickup and picked a sack of cake out of the bed and, carrying it on my horse, rode into the trap and strung the cake out horseback so everyone got a few bites, rewarding them for being willing participants in the gather.

We shut the gate and rode to the pickup and trailer. He was talking about the fog and not being able to see anything at all until the cows got there. It was a spooky experience for him, but, I knew he was safe all along. First, because I knew exactly where I’d left him, and secondly, he was on a rock solid horse that, if given his head, would have walked him right to the trailer if I didn’t show up for some reason.

The days of him thinking I was amazing didn’t last nearly long enough of course, but I sure was amazing to him that day. My ability to “see” in the foggy air had me at near Super Hero status. The slow drive home in the heavy fog was accompanied by his chatter about it, and for a while, I was amazing.