We’re putting our first horse in a sale this month. At first I was apprehensive, then I was sad, and now I’m proud. So many emotions!

We’re selling Bob, the first horse my husband bought as an adult. Jim rode Bob through a divorce, across numerous Great Basin ranches, to Texas and back home to Nevada again. Jim might have been a little sad at the thought of selling Bob at first, too. He’s used him in all aspects of ranch work, competed in many ranch rodeos on him, picked up broncs and team roped. I jumped on Bob at the last minute one year to team rope in a charity fundraiser, and our toddler daughter has ridden him around the yard.

Here’s the sale catalog picture of Bob, aka “Stormy Egypt.” He is a 13-year-0ld registered Quarter Horse. 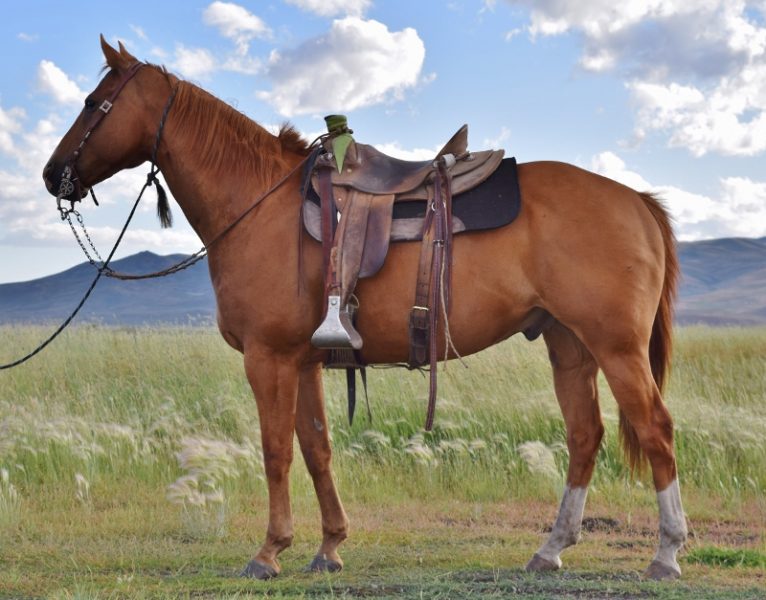 So, why are we selling such a horse? Because it’s time. We have five nice geldings, three of which are in the bridle, a fourth that is close and a snaffle-bit colt. We live and Jim works on cattle ranches, and one way for a working cowboy to boost his income is by selling well-trained horses. In addition to being a cowboy, Jim has worked for rope and cutting horse trainers over the years. Now, he’s able to use all he’s learned to make finished bridle horses that are marketable to the general public.

So, why was I apprehensive about selling Bob at first? Because Jim loves Bob. Bob has been around for some tough years of Jim’s life. I was worried Jim would regret selling off his good buddy. I told Jim that we didn’t need money that badly and that he could keep Bob forever if he wanted.

Throughout a few separate discussions, Jim repeatedly said he wanted to sell Bob and that he was okay with the idea. So, I accepted his decision, visualized sale day when Bob would no longer be ours and go to a new owner, and teared up a little. As we filled out the sale paperwork and the consignment became more real, my sadness changed to pride. Jim has done such a great job with Bob; he always gets admiring remarks when he rides him in town or works cattle in a corral on him. You can shove the pairs over the top of Jim and Bob, and they won’t let a calf be sorted the wrong way. Unlike many ranch horses, Bob is always bridled up and collected. Jim has taken the time to work Bob up from a snaffle bit to a hackamore to a two-rein outfit and then straight up in the bridle. He makes sure the big sorrel horse stops big and straight when he ropes, and he’s always asking me “How did my horse look” when he ropes in town. Jim is more concerned with how his horses did than if he missed or caught his calf.

All his hard work has paid off. Now, Jim can rope on Bob bridleless, even tying off and doctoring a calf while Bob works the rope and keeps it tight. I’m proud that my husband made such a nice horse and that we can offer him for sale to the public. Instead of the actual gelding in the corral, we will have dozens of pictures of Jim riding Bob and thousands of memories to keep him with us in the coming years. Plus, we have a corral full of other horses to ride and repeat the process with next year. Operation Sell One Bridle Horse Per Year has to start sometime, and we’re launching this project in 2016.

Along with many more quality horses, Bob will be offered for sale to the highest bidder at the Van Norman And Friends Production Sale, to be held in Elko, Nevada on Saturday, September 17th. Online and phone bidding is also available for buyers unable to personally make the trip. To view the sale catalog with the complete offering of consigned horses, visit www.vannormansale.com.