The first ride on a colt is always a pretty important day. How that goes can set the colt up for his whole saddle horse career. My son Colin was not quite 13 and had started some colts at some clinics I’d invited a respected horseman to put on. He’d learned a lot and had some nice colts to work with, home grown and handled right from day one.
I had sold a really nice two year old gelding to some folks. He’d been handled a lot on the ground and had good ground manners, led well, and was a fine young horse with a bright future ahead of him. The day the folks were coming to get him, I asked Colin to go out in the pasture and catch Rush and bring him to the house so I could brush him off, comb his mane and tail out and have him ready to go. I didn’t have any doubt that he could just walk out into the pasture, catch Rush and lead him in.
Being busy in the barn I didn’t watch him go out to the pasture. It seemed like it sure took a long time before he finally brought him to the barn so I asked him if he had trouble catching him and he hadn’t. However, as colts will sometimes do, Rush had decided to not cooperate fully. Colin had led him about halfway in when they came to an irrigation ditch that they needed to step over. Rush had grown up in that pasture and had been crossing irrigation ditches for two years without a
problem. But, he maybe hadn’t been LED over an irrigation ditch before, so he stopped. Absolutely wouldn’t step across the ditch. Colin worked with him on getting his feet moving and tried to cross. Nope. He reapproached at a different spot, still a nope. Rush didn’t pull back or throw a fit, he just absolutely was not going to step across the ditch, which, by the way, was only a about a foot deep and two feet across and grassed in. Not exactly the Grand Canyon. So, the next obvious thing to do, in Colin’s head anyway, was to ride him across. Mind you, this colt had never been saddled, ridden, or anything. But, he stood like a rock while Colin climbed on him bareback. He got his feet moving, rode him around a bit, flipping the halter rope from side to side to steer, then tried to step him across the ditch. Nope. He rode him down the ditch to a different spot, still wouldn’t cross it.
By this time, Colin’s frustration was getting pretty strong. He slid off before he did something foolish and tried to lead him across again. Nope. So, he moved Rush around until he was parallel to the ditch and right next to it. He put his hands on Rush’s ribcage and braced his feet and physically shoved him across. The only way Rush could keep from falling was to move his feet, which when he stopped moving, were finally on the other side of the ditch. Colin stepped across and led Rush on to the corral. 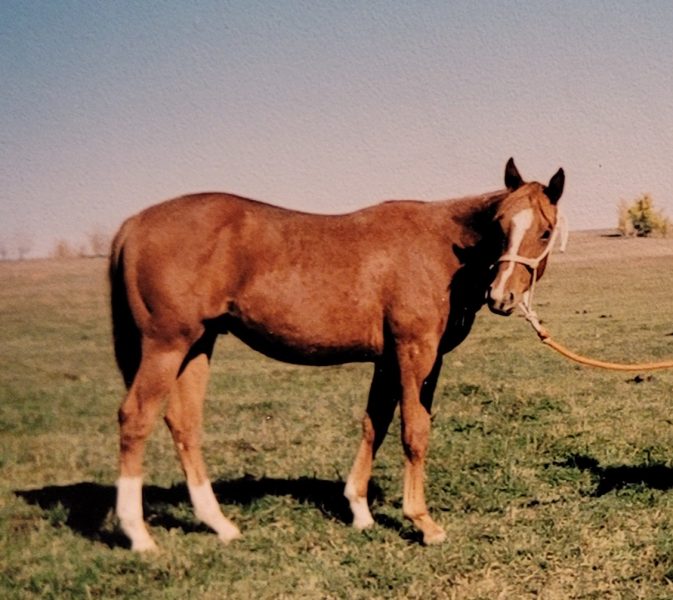 He didn’t seem to think getting on a strapping, big, fat, fresh two year old colt out in the middle of the pasture was a big deal, but it kind of startled me. But, the fact was, Rush had his first ride, and his first outside ride, under his belt and hadn’t made a bad move. He was born broke, I guess. I got him bought back when he was about 10 years old, and he’s still going
strong. As far as I know, he’s never refused to do another thing in a long career as a using horse either.
Colin has more wisdom now and gets on his colts in a pen for that first ride though.