The summer before had been a severe drought and dams were empty. Some spring rain, though not enough for runoff, had made the grass come on, so there was good grazing, but not a drop for livestock or anything else to drink.

My folks had decided to rest their summer pasture when they found they were able to lease some ground next to them with excellent grass but no water. No one wanted to lease it without water, but due to the proximity to their place, they could make hauling water to the cows feasible. So, every day, several loads of water were hauled to that pasture on a roundabout trail. Hauling water is a full time job, so, since I had a small toddler son, it was something that I could do and include him. So, every day, day in and day out, we hauled water.

I was running a few cows on my folks’ place too, so it was nice to see them everyday along with the folks’ cows. Checking them was easy as they would come to water when it arrived. In my cows was a very gentle half Guernsey black cow I had named Frenchie when it was discovered that she could lick you from the far side of the corral. She had a dandy calf at her side and was always ready for some attention when we arrived with the water.

I pulled a bumper hitch flatbed trailer with a really big tank on it, plus had a small tank in the back of the pickup. There was a gap around the sides of that pickup tank that was just wide enough for me to put Colin in so he was safely out of the way but had a front row view of the cows. He absolutely loved it. The water tanks were lined up in a row so that two big water tanks could be filled off the trailer and a small water tank from the pickup tank. I’d hook up the discharge pipes after placing Colin in his safe spot and start the water running.

I was busy hooking up the pipe to the tank on the trailer when all of a sudden I heard a blood curdling screech from the back of the pickup. The screech was followed by a howl that didn’t subside, so I hurried to see what had happened. I pushed through some cows who had surrounded the tanks and got to where Colin was howling. I asked him what was wrong as I reached for him, thinking he had a foot or finger stuck somewhere excruciating. Then I noticed his problem. His face was dripping with slobbers, bits of grass and dirt. His little cap was askew, and his hair was slobbery too. Gasping for breath, he sobbed out “Fenchie yicked me!”.

Sure enough, there was gentle and friendly Frenchie, placidly studying the noisy little creature. He had just looked too sweet to resist I guess. He wasn’t the first or last person that “Fenchie yicked” either. 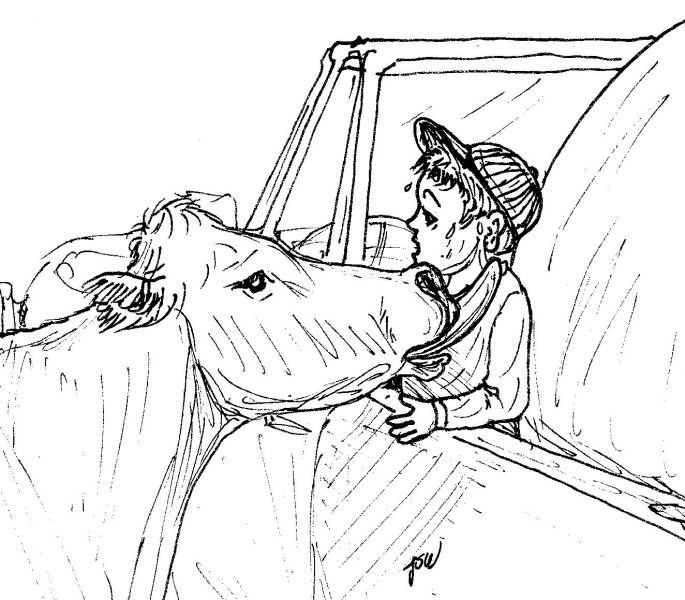