My summer herd cattle had kept me buried all summer with chronic pink eyes and footrots. I was plenty busy with them, plus checking on my folks’ cattle that were nearby. My folks had a barren Charolais cross heifer that Dad had bought who was a traveling thing. I had had to go find her and return her to the yearling cattle she was running with repeatedly. She was at least a two year old and had gotten big and fat over the summer. She was also a miserable rip to handle and I was getting kind of tired of her.

One morning I found her in the cow/calf pairs I was riding on way east of my folks’ place. She had jumped or crawled at least two really good fences to get there and I was sure aggravated when I spotted her. The owners of the cows had set up a little set of corrals on the south fence of the big pasture they were in, so I decided that I would trail her down to that corral and load her out of there and haul her back, rather than have to trail her miles across some rough pastures to put her back where she wouldn’t stay. My Dad had said he would ship her next time the yearlings were gathered so decided I would expedite that a little by loading her in my trailer and hauling her to Dad’s corrals.

She trailed across the pasture in her usual miserable fashion, though you would think with all the practice she’d had she would have been better at it. I was riding my rock solid Kelly horse so she didn’t stand a chance of getting by him, though she tried over and over. I had the pens opened wide so there was a generous 20 foot opening to get her in. She stopped in front of that opening and looked at it. I gave her time to think about it, but she decided that no one was going to put her in that corral for love or money.

We put on a cattle cutting demonstration out there on the gumbo that would have won most pro shows, but alas, she wasn’t going into that corral. While she sulked for a moment, slobber running off her chin, I reached down and tightened my cinch so I could drag her into the corral. I had gotten my rope down and had just built my loop when she made her decision. She headed straight for the nice woven wire, with two strands of barbed on top, fence that the corral wing was against. Just as she started her jump, I stuck a loop on her fat neck. She drug her hind legs on the fence on her way over, breaking the top one and a good pitch post in the process, but when her feet hit the ground she was caught.

She bucked and leaped around like a 1200 pound blue marlin on the end of my rope, but Kelly held her just fine. However, the fact remained, we were on one side and she was on the other. She finally got a little short of air on her side and was spraddled out trying to breath, and during this pause Kelly turned his head and looked at me with a look that said “What are we going to do with her now, genius?”.

Seeing as how I already had to set a new post and fix the fence from her leap over it, I concluded the only thing to do was to drag her back to our side. So, I popped my dallies, turned Kelly, took my wraps and he drug her back over, mangling more of the fence in the process. By the time she was again on the correct side of the fence, she had flopped over and was gasping for breath. I shook my rope a little to give her some air and let her regroup. Kelly and I were in a position to ride by her and drag her into the corral, but when she staggered to her feet, she could see the terrible sin of her wicked ways and, listing to port just a little, wobbled into the corral without ever tightening the rope again.

I pitched my rope and let her stand while I shut the panels, then she willingly wobbled right up into the little pen on the end and stood there quietly while I got the trailer and backed it up to load her. Once she was in the trailer I retrieved my rope and after airing Kelly’s back a while, loaded him.

She took a trip to the sale barn the next week and we never had to deal with her miserable hide again. It was worth fixing the fence to be rid of her and Kelly and I continued our summer blissfully. 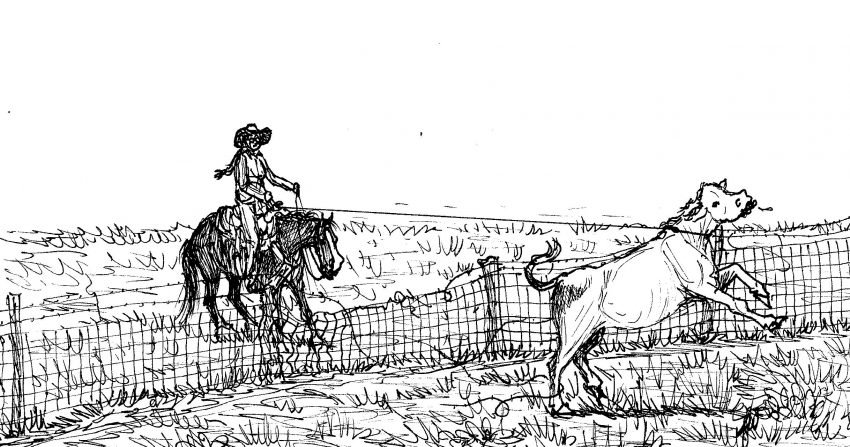