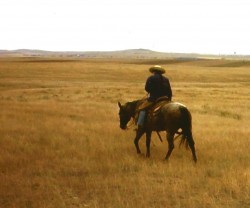 Many years ago, when my great horse Lily was a rather green, track broke mare, we were taking care of a nice set of replacement heifers for a feller. A couple of times a week one of us would ride through the heifers to make sure they were okay.

This type of riding was perfect for my young horse, who wasn’t as young as her education would suggest. I’d had her several years and she had gotten to be a big, stout seven year old without too many wet saddle blankets, though she was gentle and wanted to make a horse. Her only problem was a tendency to be a bit brain dead when she was horsing.

On the day in question, she was definitely horsing, but I never let that keep me from putting a ride on a horse or checking heifers. She and I had covered the pasture and in the last little draw before heading home, I spotted a heifer with pneumonia.

I tightened my cinches, shook down a loop and trailed in after this big yearling. I laid a soft loop over her head and let her walk through it and picked up her heels. The heifer was sick and gentle enough that she didn’t get excited and my horse never got out of a slow trot. I rode around the heifer and gently laid her down, rode up nice and short, took my wraps, then got off and tied off my rope. I tied the heifer’s front feet with my tie down string and was ready to doctor her.

Lily wasn’t at all concerned about this whole proceedings as we had doctored a few outside. She was standing quietly with the heifer’s hind feet pointing at her nose as I got my medicine bag down and stepped away to get my syringe and pills ready.

I was standing about 8 feet from the duo when, out of the blue, Lily decided that she was all done holding that heifer. I watched as she launched straight into the air and forward. When she did that, she pulled the heifer up in the air and when the whole shebang came back to earth, Lily was under the heifer, her snaffle bridle was stripped off and all I could see of her head were her eyes and nostrils. The astonished look on her face was priceless.

The heifer still wasn’t doing much struggling and my horse was able to breath and perhaps think about the sinfulness of her ways, so I proceeded to doctor the heifer. When I was done, I put my medicine bag back on my saddle, as that side was up.

I finally got the rope undone off the horn and from around Lily’s neck, then untied the heifer’s front feet. I rolled the heifer off of Lily and she stood up and walked out of the heel loop. Lily had been laid down many times since her arrival off the track, so knew she needed to stay put until I told her it was time to get up. I put her bridle back on while she was down on the ground, then stepped around her and gave a smooch.

She got up carefully, took a big, deep breath, and turned to look at me. I stepped back on and rode off a little ways before stopping to loosen my cinch. We finished our ride without incidence and headed for home.

I rode Lily for another 17 years and she never made another mistake when roping or doctoring anything. She would stand and hold one no matter what it did, and no amount of provocation or feminine vapors could make her mess up.