Day working is sort of a feast or famine way of making a living. I must have been in a time of famine, probably had something like medical bills to pay, when I agreed to go to work for a guy that called. His reputation as a womanizer was well known, but at almost 40, I was past being too concerned with that as my immunity was very high and I knew I could defend myself if need be. I agreed to gather some cows for him. To save further embarrassment, we’ll call him Dick. It seems like a good name for him.
He said he’d pick me and my horse up at my place and that I didn’t need to bring a lunch as he would. That was fine by me, no expense out of my pocket that way for either fuel or food. He arrived on time and I loaded my horse in his trailer and crawled in the pickup.

We had about a 70 mile drive to where his cows were pastured so plenty of time for me to get really tired of him. On the way, he explained that his cows, a group of registered Salers, had gotten to where he couldn’t get them in the corral. They were in a pasture of a little over a section, on the prairie, so it didn’t sound too challenging except that the Salers I’d been around were fence jumping, high speed cattle. It could get interesting. Once I had them in the corral, he wanted to give the calves their preconditioning shots. That didn’t sound like too big of a deal with a modest sized bunch of cows, maybe 25 head as I recall. When we arrived at the pasture I saw the pens and knew that it was going to be a very big deal if we got even five of the calves vaccinated before the corrals fell down. They were a wreck. I doubt they’d been used or fixed in 20 years and there were planks laying all over the ground with bent spikes sticking out of them, the gate was hanging by the bottom hinge, and the alley had no chute, headcatch or gate on the end, just an old gate leaned up at the end of it. Oh boy.
After patching and pounding nails with a rock (he had no hammer or fencing pliers) and breaking wire by repeatedly bending it, it looked like if a gentle milk cow walked in carefully and didn’t sneeze that the pens might stay standing. It was by then, lunch time. He hadn’t brought out a water jug but I was hoping the cooler on the seat had something in it. It did. Vaccine and one dried out gas station sandwich. No water bottles, pop or anything else. Just vaccine and that sandwich, which, for the record, was on rye bread, which is the driest bread on the planet. And it wasn’t fresh. I ate my half of the sandwich without choking to death on it. I couldn’t have spit for $25 it was so dry. Not wanting to draw the day out any longer, I caught my horse who had been hobbled and grazing, and bridled him. I told Dick that when he saw me coming with the cows that I wanted him to get in the pickup and stay there. I did NOT want him out wandering around or getting in the way. I stepped on Chigger, a really broke older gelding, and we started off to find this little bunch of cows.
The pens were in the southwest corner of the pasture and I found the cows in the northeast part. They looked up at me when I rode toward them but none moved. They were the best looking set of Saler cows I’d ever seen. Deep bodied and matronly with great big, fat calves on them. They quietly moved off at a walk as I went around them, and started down the fenceline headed west. We came to the corner, turned south and they continued to walk down the fenceline like perfect ladies. I was experienced enough to know that it probably wasn’t going to continue like this, but I had my hopes up. As they approached the corrals, I saw Dick get in his pickup and slam the door. They did too. Still, not a suggestion of nervousness or naughtiness to be seen. They walked down the fence and stopped about 100 feet from the gate. They apparently had a conference there and it was game on. They hit a trot, some of them even a little lope, and went by the gate without so much as a peek into it. I fell in behind them at a high trot and didn’t do anything fancy or loud, just pushed them on by that gate and down the fence headed east. They bucked and played a little even, but by the time we got to the turn to go north, they were getting a bit winded. Those chunky old girls hadn’t been out of a walk for a while and a long trot was making their fat jiggle.
Chigger and I weren’t suffering any as we followed them around along the fenceline. The corrals came back into sight and as we got close, I eased off and they walked to the gate and stopped about 30 feet from it. I waited. I motioned for Dick to stay in his danged pickup and he did. The cows decided that the corrals still didn’t need them in it and headed east at a walk. I rode up and pushed them into a trot again and around we went on lap two. By the time we started down the last stretch of the fence toward the corrals, their tongues were out in spite of it being a cool day. As we approached, I eased off again. As I sat on my horse, I watched the fat cow conference being held. Then, as one, they walked through the gate and into the corral, clear to the back. I stopped Dick from getting out of the pickup again. 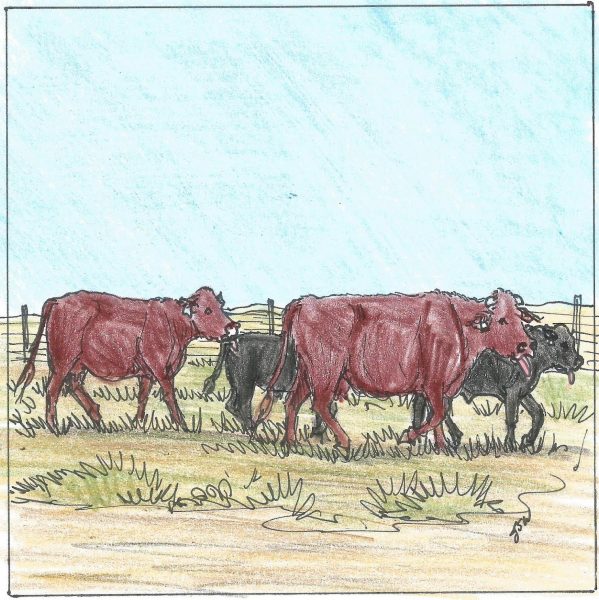 The gate was wide open when I rode over to the trailer, stepped off Chigger and loosened my cinch. The cows didn’t move. Dick had his window down whining about the gate not being shut. I politely told him to be quiet. I pulled the bridle off of Chigger, put his halter on, and tied him up. Still the cows stood at the back of the corral huffing and puffing. While looking for any sort of usable tool earlier, I had found about a half a sack of cake in the back of Dick’s pickup. I went and got it, walked into the pen, still with the gate wide open, talked to those fat, tired cows a moment, and then scattered the cake out on the ground and left the corral. That time I dragged the gate closed. Then, and only then, did I tell Dick to get out of the pickup. He was astonished. His outlaw cows were standing in the corrals. After they had had their little reward and gotten their breath back, it was no big deal to sort off those big calves, and as quiet as puppies, they were worked down that awful alley and given their shots. The corrals stayed standing and no one got stirred up except me. Dick’s endless innuendo kept me on the fight.
I sure liked that bunch of good cows. If those would have been the first Salers I’d ever dealt with, I’d have been sold on the breed. For whatever Dick lacked in common sense, manners, and stockmanship, I’ll give him credit for having some really nice cattle. The next time, and yes, there were multiple next times, those cows walked to the corrals and into them like perfect ladies. They’d had all the trotting and jiggling of their fat they ever wanted. As for me, I brought my own lunch and outfit after that. A little time with ol’ Dick was plenty, a long drive was too much. But, I charged the heck out of him for my daywork and mileage. He never quibbled and his check was good.