Fast Trip For A Little Girl and Roxie

Her name was Roxie, and as a child, I thought she was the mot beautiful horse I had ever seen. She was a bright sorrel with light flaxen mane, bald face and four white stockings. She was, at the time of this story, about a three year old I suppose, and belonged to my sister.

My sister and brother closest to me in age, were in high school, and we were out doing the riding needed on the ranch, which included riding bog lines and checking yearlings, cows and bulls. When we got to the Owl Creek pasture where the cows were, we discovered a neighbor’s bull in with them. He was a big, older Hereford bull whose horns had never been turned, and because he was also kind of “western”, we called him the John Wayne bull. His habitual traveling made him less than popular with all of us, as we had to put him back all the time, plus his calves kind of stuck out amongst our Charolais sired ones. We were even running the cows in a pasture with another pasture between us and him, but it sure didn’t slow him down.

On this day, I was riding my trusty Penny. My sister Linda was on Roxie, my brother Bob on Rocky. Rocky and Penny were really broke, but Roxie was still pretty green. So, when the bull was discovered, they decided he needed some education, not just exercise, getting back to his cows. Linda deemed it wisest to do that educating on a broke horse, not a colt. She had me get off and we swapped saddles on our horses.

I had not only never ridden a snaffle bit colt, but had never ridden a horse with long mane. Roaching manes was the big thing in that era, but due to Roxie’s beautiful mane, Linda let her’s be long. Linda and Bob gave me instructions to ride ahead to whichever gate they ended up at and open it, then I was to ride ahead to the next one and have it open too, as that bull would be moving right along as they came to the gates. So, me on a colt, loping ahead of the bull education committee, needed to get off, open a tight gate, then climb back on a colt and get out of the way, before the bull arrived.

They got their ropes down, doubled them so they had about eight feet of rope to utilize, and sorted nasty old John Wayne out of the cows. They lined him out and one of them rode in and started whipping him down the back with their doubled rope. The bull didn’t like that much and decided to take the horse, so that rider would lead him off and the other would ride in and continue the treatment. They switched back and forth, never giving the bull much of a break between. All this was with the bull at full speed.

I loped hard to the nearest gate, jumped off, opened the gate, then climbed back up Roxie’s leg and was out of the way when they came through. I went and shut the gate, got back on, then had to hurry across the Jug Creek pasture to get ahead of them. John Wayne had concluded that horse fighting wasn’t his long suit, so he lined out running with Linda, the left hander on one side, Bob the right hander on the other, rhythmically whipping his broad back. It sure appeared that he was really missing his own cows and was eager to return to them.

Riding hard down the long slope toward the creek, jumping draws, and dodging rocks, Roxie and I were making a beeline for the next gate. I remember looking down at Roxie’s mane flying in the wind and thinking how beautiful it was! Talk about exciting, that mare just floated and could really run! My weight sure didn’t impede her any either.

I had to really stretch her out to get to the next gate as the bull procession was coming fast. Roxie, in spite of the speed and urgency involved, pulled up easily at the gate and once I had it opened, she again stood like a rock while I got back on. We rode out of the way just in time for John Wayne to race through it, his tongue hanging out, his hind quarters painted with green, and welts the length of his back.

Once inside the pasture, they let up on him and we followed him to his cows. The cows were at water and he waded into the stock dam and stopped. They stepped off and while our horses caught their breath. Linda and I traded horses again.

I’ve never forgotten the exhilaration of riding that lovely mare, mane flying, like she was floating across the pasture. We eventually got paired up and I did 4-H and playdays on her, but no other ride was quite like that first one, when her and I flew like the wind and my heart became hers forever. 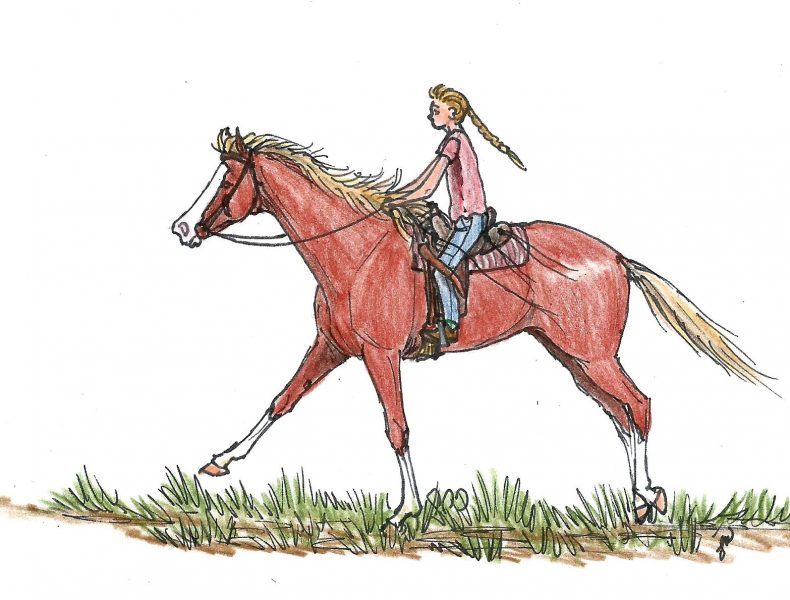