I’m pretty sure Spring is in full swing.

The wild onions are sprouting.

The Meadowlarks call to one another.

There are ducks everywhere (including our calving corral this morning), and the world is turning an emerald shade of green.

There’s been plenty of wind, it’s currently raining, and there’s muddy gumbo everywhere here in Armstrong. As most of you around here know, calving is either almost done, halfway done, or you’re just getting started, like us.

Easter Sunday I got up to drive through the cow herd and tag new babies. I’m not gonna lie, I love the babies. Their wobbly, knock-kneed legs, the way they stick their tongues out to suck a bottle or a teat – those are some of my favorite scenes. 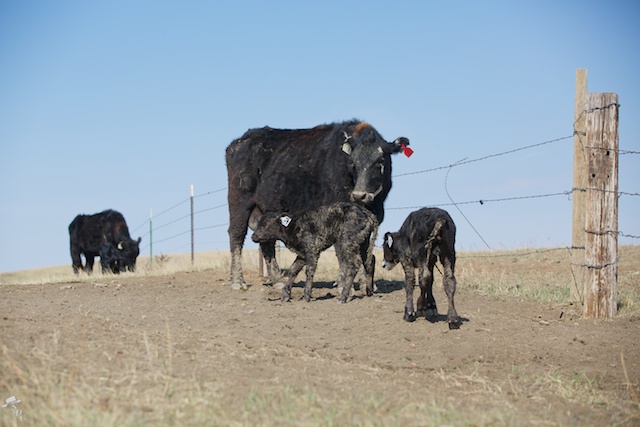 As we were just making our final sweep, we found a set of twins – twin heifers. We numbered them 126 and 126A, because their mom is #126. I’m clever like that. Their mama watched as I pierced their left ears, and when I was done, she took them both with her over the hill.

The next day, we went to tag calves again, which, as many of you know is a daily occurrence during calving. Plus, we needed to check on the twins. That morning, the twins weren’t together – they were on either side of a ridge with the cow in between. We left them alone and decided we’d check on them again that afternoon.

I drove down about 5:45 that evening. 126A was not very far from where we’d left her that morning, and she was bawling and sucking on every yet-to-calve-cow she could find. Which meant, one thing – mama decided she didn’t want two babies, and that meant I’d need to catch her and bring her home.

Shouldn’t be too hard, right? She’s just over a day old, and weak because her mom decided NOT to share the supper plate with her. I had no doubt I could get her home – until she paired up with #84. Earlier in the day, we had run on to this cow. She’d just calved and she’s a, how shall we say it? A rather protective mother. We had to get creative when it came time to tag her calf. She’s so protective, that she was not a fan of little 126A even being near her. She’d paw at her, and bump her with her head to push her away. There was no way I was going to get anywhere near that cow after the trouble she’d given us that morning tagging her calf. So, I waited, following far behind in the ATV. This went on for a few hundred yards, and finally #84 convinced her to get away. At which point she went up a hill and laid down. I pounced, rope in hand. Three <del>hilarious misses</del>, tries later I had her. I have got to practice more.

After some wrangling, I managed to get her feet tied, and her arranged in the floorboard, such that she couldn’t struggle for our long ride home. When we arrived I put her in the barn, tracked down the milk replacer, took it to the house, made her a bottle, and my niece and great niece came down to the barn with me for her first feeding. Many of you know that’s always an experience! Luckily for us, she was pretty hungry and once we got her caught and put the bottle in her mouth, she went right to town on it! She was certain she needed more.

Little Ellie, as I’ve decided to call her, has become our first bum of the year (knock on wood) and as I write this, I just got a call that another cow calved in the night and lost her calf, so Ellie should hopefully have her own mama by the end of the week. I’m sure she’ll much prefer the bovine kind to the human kind!