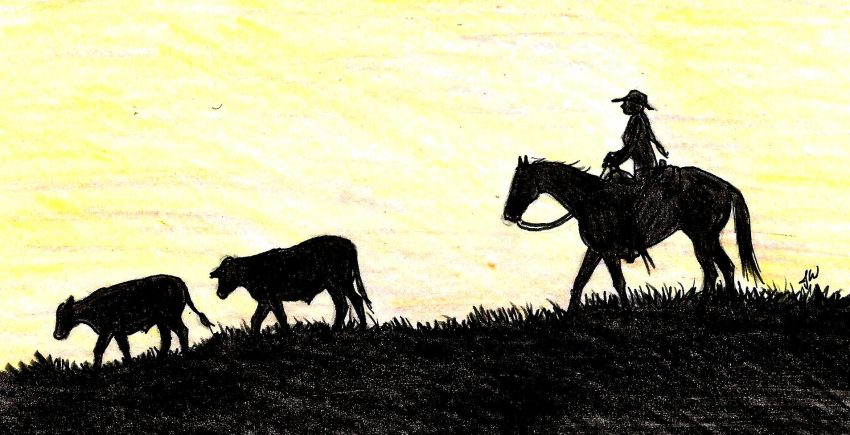 It’s early fall right now, with people shipping livestock and doing the fall works on cattle. I rode on pasture cattle for years, so this time of year always makes me think of those days. By this time, my string of horses would be weary along with me. Troublesome bunches of yearlings were gladly seen on their way, and the mother cows were nursing big calves in preparation for their shipping. The season was winding down.

One ranch that ran cattle on summer range with me was from out of state. They were about 100 miles away and once the cattle were brought in May, left me to take care of them with no questions asked. It was a good relationship and I’d worked for them for several seasons.

This particular year they had brought mother cows, replacement heifers, and a big string of yearling steers. The steers were a partnership between three ranches within the family. There were about 650 of the steers and they had been a pretty good bunch as far as not much sickness or trouble. But, they were big and fat and ready to go to the feedlot, so it was time to ship them.

On a neighboring summer range I was also riding on, there was a good set of pens set up that would accommodate a big bunch, so I talked to those owners and got permission from them to load the steers out of there after trailing across their one empty pasture to the pens. It was a good setup and my steer owners were sure pleased, as it was only a few miles instead of over 10 to the next closest set of pens.

So, the date was set and my boss said that they would be there to start gathering at four o’clock. I thought it was kind of early for as cool as it was, no need to beat the heat, but he was the boss, and heavens, I only had to ride a few miles to the pasture whereas they had to get up, get saddled, load up and drive about 100 miles. So, I said I’d be there and start gathering from the north end.

On the given day, I trotted over to the north side of the big pasture and started pushing the steers in the dark. I got them drifting south and they were making good time. As I crossed each ridge and rode out each draw, I kept expecting the rest of the crew to show on the horizon. When it was getting light enough to see quite a ways, I topped out on a high point to scout for steers and looked off to the south to see if I saw any sign of the other riders. Nothing. That was odd. They were always punctual. I hoped nothing had gone wrong like a breakdown or something, and kept gathering.

The steers sure gathered nice, considering there was just one of me. I don’t know if they’d figured that out yet, as the pasture had a lot of hills and draws in it. I was riding a leggy horse that sure covered the country easy, and we covered lots of it, not only finding the steers but keeping them drifting in the right direction.

It was bright daylight when I had them all over against the east fence walking south across a big flat. Still no other riders. I knew something must have happened and they were held up. Well, no problem. I’d push the steers to the dam in the southeast corner and I could easily hold them there until everyone else showed up.

The steers watered and then spread out a little. Some laid down and chewed their cuds, others just slowly picked a little grass. They were easy to hold, so I slipped the bridle out of my horse’s mouth and let him graze a little too. I sat on the ground by him and watched the steers and the country to the south. My horse got to fill up a little and we rested, but I was starting to get concerned. Not only for the rest of the crew but for the arrival of trucks at the corrals and no cattle to load.

As another hour started to pass, the steers decided they’d seen all of that corner they wanted to. They wanted to start drifting again, so one way to keep them gathered was to start across the next pasture toward the corrals. I loped ahead of them and opened a gate, then tucked in the stragglers and got them moving again. They went through the gate nicely and, curious about the new pasture, really walked out, a light breeze blowing in their faces and pulling them on.

It took at least another hour to get to the southwest corner of that pasture where there was a really big dam that was kind of horseshoe shaped. This pasture had been empty for a month or so, and a little green had come back after late rains, so the steers settled into that horseshoe and grazed the new grass. From a rise just west of the dam, I could look way off to the south to where the pens were. I was sure surprised to see no trailers, no bull racks, nothing but pens. It sure was puzzling.

It was darned near noon by this time and my breakfast had worn off, so I dug an apple out of my slicker and ate it. I hobbled my horse, since the steers were pretty well trapped in the horseshoe, and let him graze. I’d watered him in the dam when I got the steers there, so he was having a nice break.

I tried to just settle down and rest, but I was really starting to worry about the crew. I reviewed my conversation with the owner and knew I was there the right day. What in the world could have happened? My mind started making up terrible scenarios of them having a wreck, maybe with the trucks as they weren’t there either. Good grief, pretty soon I was pacing like a worried parent. My horse watched me, mildly interested in my odd behavior. He was getting filled up on the green grass, so, decided that humans were pretty strange and went back to grazing.

The afternoon wore on. I didn’t have a watch, but by the sun, knew it was getting past mid afternoon. The steers were getting restless, so, I decided to drift them on toward the corner closest to where we’d cross over a county road and then into the pasture with the corrals a mile or so away. I just didn’t know what else to do. I didn’t want to leave the steers to ride to where I could call anyone. The pasture was empty, but, re-gathering would take quite a while. So, I let the steers out of the horseshoe corner and headed the leaders southwest. They walked right out.

Coming up out of a flat I topped out and finally, off to the south were several pickups and trailers at the pens with people unloading horses. What a relief. I’d really been worried. I kept walking the steers, now along the south fence, and watched the riders start my way.

They set the gates as they crossed the road and rode out wide around the steers and waited. One counted as they went through the gate. The owner trotted his horse on around to where I was bringing up the pokey steers. We pulled up and he looked at me, then at the steers. He looked at me again. He asked my if they’d given me any trouble, never mentioning why they had been running so late. I told him that I’d watered them twice and grazed them all day. He was pleased, but still looked puzzled. He asked me what time I’d started gathering. I told him I got to the north end at a little before 4 a.m. He nodded.

He sat a moment longer, then a grin started building. Finally, he couldn’t help it, but started laughing. I didn’t know what was funny, so waited. Finally, wiping his eyes, he said, “When I said 4 o’clock, I meant in the afternoon, not the morning.”

Good grief. No wonder they were so “late”! I had to laugh too. He was sure pleased with how the steers looked after their slow trail across the country, and I was really relieved that they hadn’t had some terrible wreck getting there.

Ever after, when someone told me a time, I always confirmed whether it was a.m. or p.m. He never let me forget my early start either.