Keeping cattle healthy is a top job priority for a professional cowboy; therefore, so is knowing how to detect unhealthy cattle. RO Ranch cowboy Jim Young said he strives for “early detection,” meaning he notices and doctors calves at the very first sign of illness. It’s more difficult to pick up on those early signs, but if you wait until calves are obviously sick to the casual observer, you’ve waited too long.

“You don’t want to let those calves get to the point of being that sick. If they’re that sick, then you’re not doing your doctoring right because you’re not getting your early detections,” said Jim.

“A lot of it’s developed over years and riding through thousands of head of cattle. Look for that one that’s just a tick off, a little sad for himself, a little slower. Then you have to make that mental evaluation of whether they’re just genetically a dink or actually sick,” said Jim.

A calf that is genetically inferior, aka “a dink,” is one that was leppied (motherless shortly after birth), out of an old cow that should have been culled, or just naturally a little on the scrubby side. If a dink calf is in good flesh, he probably isn’t sick. But, if he’s hollow through the flanks, he might need some doctoring.

The weather on the day that a cowboy is checking cattle plays a part in how he assesses them. On a cold, dreary day, even healthy calves look sick because they will stand huddled up with their heads down and ears drooping in the rain.

The type of feed that a calf is on also plays a big part in their appearance and overall health. If they’re eating insufficient or nutritionally deficient feed, they can appear sick when they’re not or become sick when they otherwise shouldn’t.

Cowboying: there’s a whole lot more to it than just staying on top of a horse.

Each cowboy has certain medicines that he prefers to administer for different ailments. Jim likes Draxxin for respiratory diseases and foot rot. He likes LA 200 and Dexamethasone for anti-inflammatory purposes. Penicillin or LA injected into the eyelid is good for bad eyes, and a probiotic paste given orally with other medicines can help settle an animal’s stomach when sick.

Since the RO is a natural beef program, an ear tag notching system is used to keep track of which calves have been doctored for which illness. The cowboys use their pocketknives to carve out a notch on the bottom left-hand corner of the ear tag to record that the calf was doctored for foot rot. A notch in the middle means a respiratory illness, and an inside notch means a bad eye. 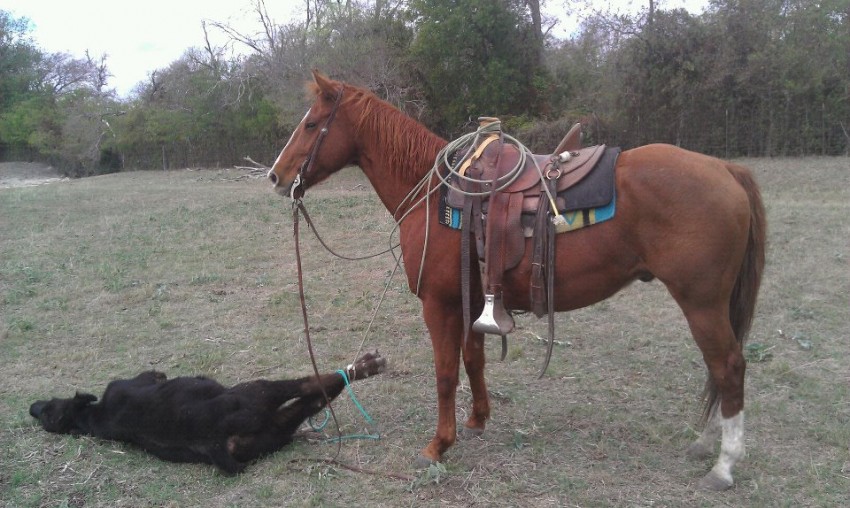 A major perk of doctoring calves is educating a rope horse. Here, a young Bob (aka “Bobalicious,” “Jim’s Bestest Favorite Horse,” or “You #&@%!”) holds the rope tight.