My sister and I had the job every summer, of riding boglines and checking cattle and sheep. Dad usually had the boys, 0ne college age, the other in high school, in the hayfield or on the fencing projects, so it was usually just Linda and I. The two oldest kids were grown up and gone.

Linda is seven years older than me and was the authority on everything under the sun as far as I was concerned. She was in late high school, so at that age, also believed the same thing.

From the time the sheep went to summer pasture until either the creeks dried up or the sheep were moved, we were out there every day, pulling sheep out of the boggy, gumbo creeks and dams. We also checked and scattered bulls and rode on all of the other cattle. In order to get this big circle made every day before it was terribly hot, we left early, but even so, it still got miserably hot before we were done. No one ever carried water in those days, so, we would often drink out of a dam or a big pool in the creek (yes, I’m sure we had amazing gut bacteria from that!). But, as summer went on, the dams got stagnant and the big pools dried up in the creeks, so thirst became an issue.

One day, having completed our riding, we were headed for home, miles away. Below a dam in the Jug Creek pasture, there was a small sheep trough that was set up on what we called the “spring”, but it was simply a seep that was collected and piped from below the leaky dam. The sheep utilized it in the winter if there wasn’t snow on the ground for them to get their moisture from, but wouldn’t use it any other time. It was always sparkling clean, no moss or anything, and since it ran all the time, it stayed cooler than standing water. That said, Dad had warned us to never, ever drink out of the “spring” tank.

As we crossed the dry creek bed below it, we came upon this charming oasis. Our horses were thirsty and our black dog Mandy had her tongue out a foot. So, we stopped to tank up. First of all, the horses wouldn’t even wet their muzzles in it. Mandy, panting desperately, wouldn’t drink out of it either. Linda said that they just didn’t like the tank. So, we got down on our knees and bellied up on this welcome water.

The taste was, shall we say, tart-ish, nearly bitter. But, when you’ve been riding for hours with nothing but sun and wind, one overlooks such details. We again invited Mandy to drink and get in the tank to cool off. She moved further from us in the shade of the horses.

We got back on, sloshing somewhat, and headed for home. Suddenly, our guts started complaining loudly. Then the knifelike pains hit. We hadn’t gotten an eighth of a mile when we both bailed off and dropped our britches. It was like nothing I’d ever experienced before, and I’m sure Linda hadn’t either. We never even got back on our horses. We led them along, holding our pants up with one hand, not daring to even fasten them.

The direct route home led down a ridge that looked off toward the meadows about a mile away where Dad could be seen on the tractor cutting hay. We glanced that way between stops, but kept doggedly walking toward home, with many stops enroute.

We put our horses up, by then weaker than vegetarian cats, and staggered to the house to lay on the living room floor in front of the fan until we could die. Talk about drained. We were empty, devoid of any insides whatsoever by the feel of things. Just the flickering flames of the explosion remained inside us.

Linda had told me to not tell Mom and Dad what we’d done. It was just the heat that had made us sick, according to the story shared with Mom. I went along with it, too sick to care if they believed it.

We heard Dad drive in for dinner but never moved off the floor. He came in, washed up, and walked through to the living room. He stood in the doorway and looked at us. We just laid there in our pitiful state. Finally, with a half grin on his face, he asked “So, how was the water at the spring?”

Busted. He’d seen us walking and known what we’d done from way over on that meadow. No need to punish us for not listening, as we’d definitely punished ourselves. Horse sense and dog sense were sure stronger than girl sense. 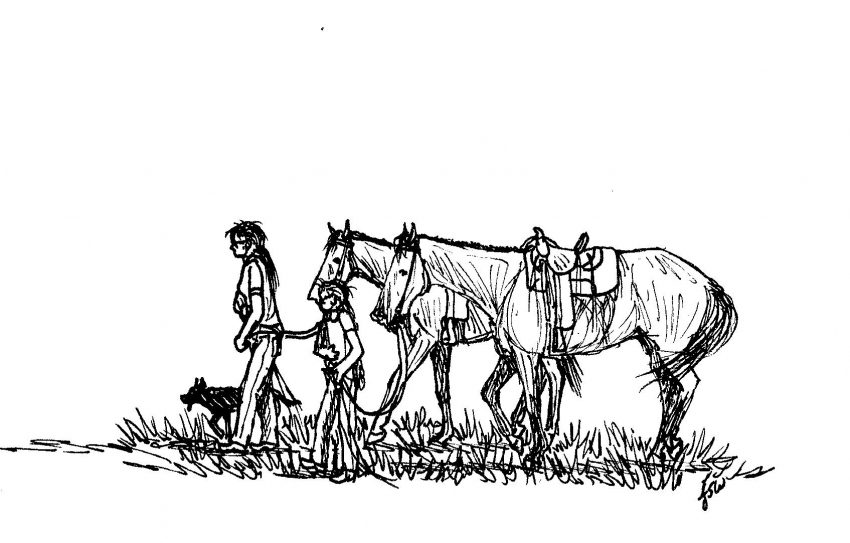