Dillon and Doc the Bulldogging Horses

Jim Whiting owned two of the best bulldogging horses a guy could ask for.

Dillon and Doc were a pair in the steer wrestling that were hard to beat.

Dillon, a buckskin with a black mane and tail, and Doc, a chestnut with a white star on his head, were Jim’s bulldogging horses in the 1980s.

Whiting, who competed in the team roping, too, bought Dillon in 1980 from Stan Williamson. He scored well, tolerated other guys on him, and would “walk into the box, turn around, and walk back real slow into the corner,” Jim said. He’d score, too, he said. “If you had to see (a steer) five feet out, he’d stand like a rock till you dropped your hand.”

Doc, the second part of the team, was purchased a year prior from Joe Dorenkamp. The chestnut had speed and control. “You could ask him to go from zero to sixty, and he would. You could move him right or left.” When Jim’s wife Lori, a barrel racer, needed a mount for muddy arena conditions, she’d ride Doc. Doc was tall, and not a looker. “He wasn’t the prettiest horse in the world, but a horse with a huge heart,” the Valentine, Neb. cowboy  said.

Back then, Allen Good was rodeoing with Jim, and he remembers a steer he drew in Minot, N.D., one that would walk out of the chute. They’d missed him the previous three runs, so Allen and Jim came up with a plan. “Dillon will set there till you ask him to leave,” Allen said. So Allen didn’t make him move till the steer had crossed the score line. “I won the round and the average,” he said. “There’s not a lot of horses that will set there that long.” 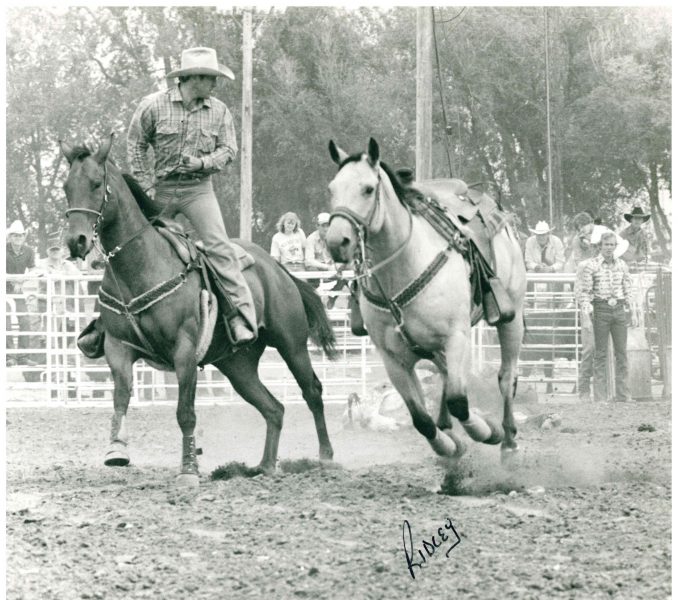 A lot of cowboys mounted out on Dillon. Jim remembers some of them that won money on the horse: Johnny Jones won Sheridan, Wyo.; Butch Myers won Deadwood; Paul Tierney won Belle Fourche, and Stan Williamson won Mitchell, all on Dillon.

At Deadwood one year, Allen recalls, out of ten checks, nine were to steer wrestlers on Dillon. “He got a piece of every check except for one, and that was a ten-money rodeo.” At Deadwood that same year, on Doc, Jim and Allen hazed thirty steers that morning. “Dillon and Doc were the first ones that could handle that many runs,” Allen said.

At the time, Lori was also rodeoing hard, on her good horse, Annie, so the three were often together. Annie won the Badlands Barrel Horse of the Year six times; Dillon was a three-time Badlands Steer Wrestling Horse of the Year. Doc didn’t win any awards; at the time, a hazing horse of the year was not awarded. “They were quite a trio,” Jim said.

Dillon and Doc were stand-outs but at that time, there were several other good steer wrestling and hazing horses, Jim said. “Had they been in this era, they’d have been the go-to horses. But when those horses were around, there was Catfish of Alfalfa Fedderson’s, Reverend of the Green Boys’, Peanuts of Jerry Jones. So they just kind of blended in. Now they would have stood out like a rose in an alfalfa field.”

The horses were inducted into the 2020 Casey Tibbs (S.D.) Rodeo Hall of Fame. 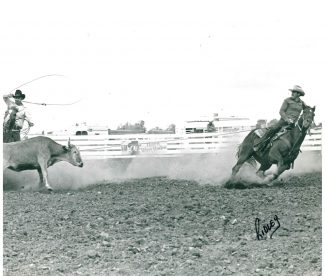 Doc was not only a great hazing horse but a good head horse, too. Jim headed on him for Duane Parker in the early 1980s at Highmore, S.D. Photo by Ridley. 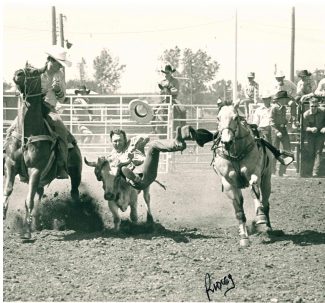 At a Barnes rodeo, Jim steer wrestles and Allen Good hazes on Jim’s horses Dillon and Doc. Photo by Ridley.