It was an early summer and I had been hired to ride on the cattle on a big summer range next to my folks ranch. I did the riding on both places as I was in high school. The pasture I was checking steers in was rolling prairie with some deep draws and hills with little knobs of rock on them. The grass was growing tall and the cattle were doing well. It was a nice time to be alive.

I had gotten through most of the cattle in that pasture and was just riding out the rest of the draws and corners to make sure I hadn’t missed anything. As I came to each of those little rocky hills, I’d ride across the sidehill, avoiding the rock piles on top, and look off of them to spot any steers. The southwest corner of this particular pasture had lots of these little hills, so my horse and I were up and down on them and probably half asleep from our early start that morning.

There was the usual breeze blowing that day, so I was wearing a ball cap instead of a hat. They were a little cooler too, so I often wore one on hot summer days. If I recall correctly, I was riding a gelding called Joker. He was a good horse but a little watchy on the ground and didn’t care for sudden moves from me when I was on him.

We were cruising along at a fast walk and I was watching for steers in the draws when suddenly, absolutely out of nowhere, my cap was knocked violently off of my head. Joker crouched then shied at the same time, running sideways off the side of the hill we were on. Startled, to say the least, I looked up to see what was going on just in time to duck another dive bomb from a big hawk!

Both hawks were in the air above me but I dodged the second dive and hurried off the hill, which Joker was in favor of. I rode out of what must have been the danger zone and stopped. The hawks were circling in the air over the rock pile on top of that hill, so I knew they had a nest.

I don’t know what type of hawk they were, as there were many varieties in the area, but they were good sized and when dive bombing one’s head, seemed to be about an F14 size and speed. I didn’t want to disturb their nest or babies, but they didn’t know that. I did want my cap back though. I got off of Joker so I wasn’t the tallest thing around, seeing as how my head was the next thing to get knocked off with a hawk’s ample talons, and persuaded him to be led back up that sidehill to my cap. The hawks swooped and screeched at us, but neither of us got hit as I grabbed my cap and we trotted quickly back down the hill to where it was safe to get back on.

Though there were about a dozen of those little hills in that corner of the pasture I never lost track of which one had the hawk nest on it! I’d give it a pretty wide berth each time I rode by. When I happened to be riding Joker, he sure watched that hill too and I don’t think he’d have let me make the mistake of riding over it again anyway. 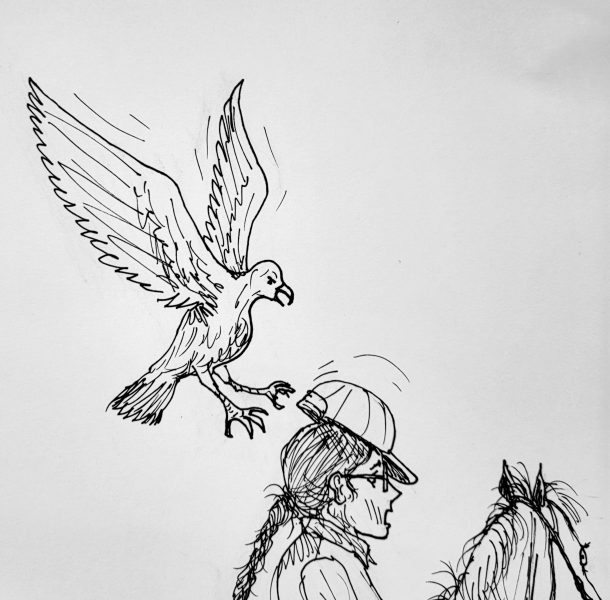