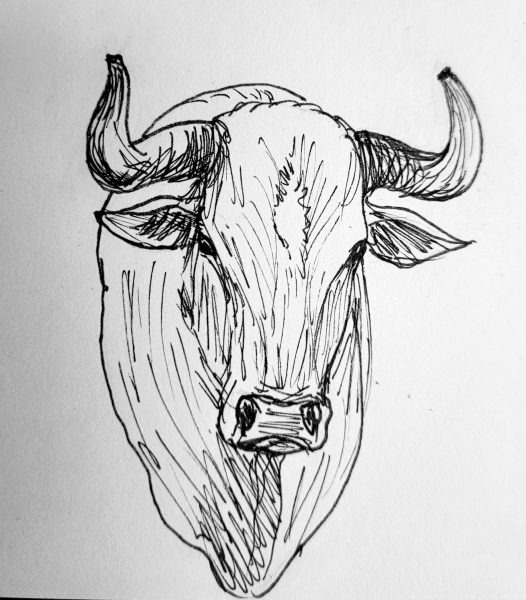 It was a cool winter morning cowboying in northeastern New Mexico. It was unusually damp too, as there was fog hanging above headquarters, shrouding the surrounding mesas and hiding them in the early morning light. Six of us loaded our horses into a couple of trailers to head to the Top, as the country above was called. Our mission was to gather some bulls and bring them back to headquarters.

Figuring the fog would burn off by the time we hauled about 25 miles around and back into the pasture, which was actually nearly straight north of headquarters, we set off. Our crew was cowboss Pete, Danny, Don, Rick, Alan and myself.

I had never been to this pasture, as my riding was done on the “camp” to the south and east of headquarters in the valley between the mesa’s edge and the lava buttes and cones to the east. So, going up top was going to be strange country. I chose a soft footin’ sorrel four year old colt that I thought a lot of. The one broke horse in my string was laid up from slipping on a rock, so my colt Lizzy was my next choice. He was green but moved easy and was as honest as the day is long.

We trailered down a long trail road through several pastures and finally arrived at the pens and unloaded. Pete gave out the orders and we dispersed. I was to head east through the cedars and to the far fence, then sweep back parallel to the edge of the mesa and back.

The fog was thicker than ever by this time and I had about 40 feet of clear visibility and saw mostly cedars. Gathering this particular set of bulls had it’s own challenges. They were Mexican fighting bulls, not corrientes like the roping cattle. These bulls were very aggressive and hard to handle, but they had their place on the ranch. They were used on the Brahman cross first calf heifers that calved in the wildest, roughest, rockiest, meanest pasture you can imagine. They needed to be able to calve unassisted and for the heifer and calf to be able to ward off predators like coyotes and lions. Believe me, those little calves at 40 pounds would fight like tigers when they were still wet, if their young, horned mamas didn’t get to you first!

So, besides the fog, the bulls themselves were rather dangerous to deal with and would hunt you. We knew there were eight of those bulls in this pasture, so with six of us to pursue, the eight should gather pretty easy, right? It was a comfort.

Lizzy and I were soon enveloped in fog so thick that my face and glasses were wet. The cedars were evenly spaced about 15 feet apart and were huge, plus there were rocky stretches as big as a dance floor scattered around as if dropped from the heavens. Lizzy carefully traversed their sloping surfaces, peered around the cedars and I was hoping we were still heading east.

The fog got thicker. Dang. I knew I was still right side up because nothing was falling out of my pockets past my head, but that’s about the only direction I had. I could picture the horns of those bulls emerging from the fog around every cedar and was starting to get the creepies. Lizzy was edgy too, probably picking it up from me. I finally stopped and tried to get my bearings. My usually good sense of direction was telling me nothing.

So, Lizzy and I pushed through between two dripping cedars and went a couple more yards and he suddenly just parked. He snorted and stepped back. Nope, not a bull, but a panoramic view of the valley below looking off the sheer drop of about 500 feet off the mesa edge! We retreated and sat there for a moment, hearts pounding.

I realized that we were hopelessly lost and that my mission had changed from finding bulls to just finding my way back to the pens without falling out of the pasture. I turned him north away from the edge of the earth and then a little west, hoping to intercept another rider, hear a voice, or a bull beller, anything to get homed in. In about a 100 yards, we crossed a cow trail and in it were horse tracks. We turned and followed it for a ways, then discovered it was Lizzy’s tracks when we came to a big slick rock we’d already crossed. Rats.

Finally, still riding what I thought was northwest, I heard a voice and a hoof click on rock. Lizzy, usually silent, nickered and was answered. In a little ways, another rider materialized and they were on a trail they knew and we soon caught up with the others who had found the bulls to the northwest and had them in the pens. Gathering them had entailed finding them and then outdistancing them to the big corral and someone being brave enough to close the gates behind them. I was relieved. I hadn’t been any help, but at least they didn’t have to leave me out there until the fog lifted.

The fog promptly lifted as soon as we were loaded and headed out the miles to the highway. We had all the horses in one trailer that was one horse too small and the meanest bunch of bulls I ever met in the other trailer. I was in the pickup hauling the horses and we were in the lead.

As we closed the last gate out onto the highway, the cowboss mentioned that the brakes were bad on the trailer with the bulls, so he might have to use our rig to slow him down off of the mesa. That sounded like a really awesome time, as the highway went off of David Hill on a switchback so steep that if you kicked a rock off at the top it would bounce on the highway at the bottom. The road was narrow and dropped off into brush and rock choked canyons far below.

Pulling the ¾ ton pickup into low range, we started off of the mesa in creep mode. Soon we felt the bumper of the other pickup pushing on the back of our trailer. Thankfully the driver, Alan, had been a bull hauler in his time, so negotiated the switchback well. We arrived at the bottom still upright and on the pavement, much to the collective sigh of relief by the whole crew, and probably the horses.

Just another day in cowboying. Fog, dangerous cattle and a death defying drive off of a mesa. I don’t have to relive that day. Once was enough.