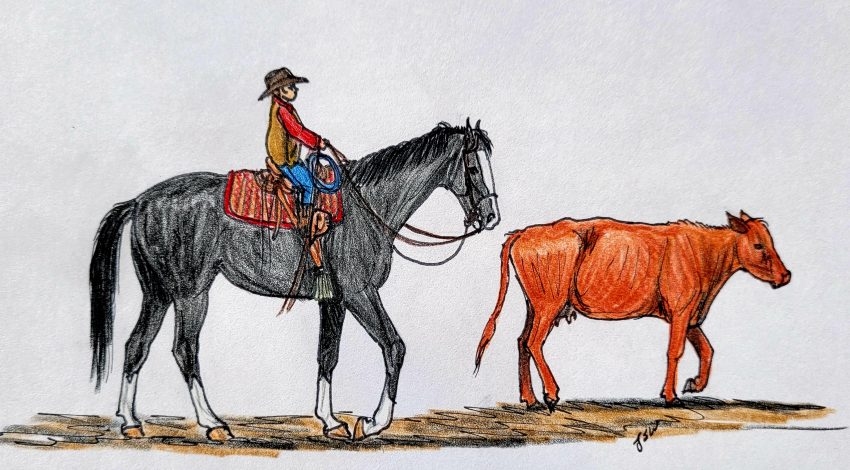 When my little son was almost four years old, we were helping a friend work his cows in the fall. His old trusted horse Lobo had passed away a few weeks before, so for the later fall work, I was leading Colin on my top horse Kelly. Kelly was gentle and liked Colin and was fine being led, but couldn’t be turned loose outside because he was just too much horse.

We had gotten the cows gathered and into corrals we were going to work them in. There was a big pen on the east side that had a gate in the corner that went into a long sorting alley. The rest of the crew was working the chute and chute alley, I was in the sorting alley, which was quite long, and I was letting Colin ride Kelly around out in the big pen with the cows. It would keep him busy I reasoned, and out of danger from the old corrals falling over on him.

I was afoot, as the alley was pretty narrow, so each time I needed more cattle, I’d go into the big pen, get back on my horse and with Colin and Kelly helping, fill the sorting alley again. Kelly had worked thousands and thousands of cattle in his career, so he did his job whether Colin was guiding him or not, so it was pretty neat to watch.

When I had gone to open the dragging gate to go get more cows for the third or fourth time, I got called up to the other end to talk to the guys at the chute. That done, I turned back to go fill the big alley again, and lo and behold, it was already full of cows and Kelly and Colin were holding the gate. The smile on that little boy’s face was ear to ear and would have lit up the room. He said “We brought more cows, Mommy!”. Kelly looked pretty proud too. So, for the rest of the time, I never got back on my horse, just opened the gate and stood out of the way and watched that amazing horse and little boy do a grownup cowboy job until we had them all done. Kelly would outthink the cows so quick that they made it look easy. It made that little cowboy about 10 feet tall when the owner came back and bragged on him.

We had some things to fix before we loaded out a bunch of yearlings the coming week, so we got started on that. Colin wanted to go to the pickup and get a snack, so I told him to go ahead and tied Kelly up for him. I saw him crawl up into the cab and settle in, so I went back to work.

The owner’s brother was there helping and had had a great time with Colin, visiting with him and asking questions. He had a long drive back to the city where he lived and worked, so he left before we were done.When I later went to check on Colin, as I hadn’t seen him in a little while, I found him asleep sitting up on the pickup seat, a partly eaten sandwich held loosely in one hand and every pocket, from pants to vest, stuffed full of candy from the owner’s brother. He’d made a good friend in that fine man, and a little, or a lot, of candy never hurt a little boy who had worked hard all day, doing man’s work on a real using horse.