One Hell of a Cowhorse

Due to a series of poorly timed events, a full moon, and Friday the Thirteenth, our branding this year was unusually stressful and long. What usually takes my family a day to get done, ended up taking the most of a full weekend, two different sets of help, and a lot more beer than usual. I am not sure I have ever been so happy to have four hundred head of calves branded and out to pasture. 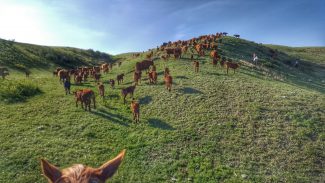 Seeing these dang cows headed back to pasture brought tears to my eyes; tears of pride and thankfulness that we were finally done for the day!

We have been blessed to always have good help on branding day. This year was {mostly} no different. Besides a few riders that left me scratching my head and being forced to ride twice as much as necessary, I guess the silver lining is that no day is wasted that is spent in the saddle.

Since my paint horse was, of course, sore from his ongoing battle with founder, I ended up riding my dad’s horse- who is supposed to be enjoying retirement instead of having his butt rode off like the young gelding he once was. And for as soft and green as he was, that horse reminded me that when there is work to be done, you just have to push through the pain and tiredness and get it done. We ran all over hell and back chasing rogue calves and cows that had lost their minds for two days; by Sunday afternoon poor old Reggie would probably liked to have been dead. He is a great stock horse, and I will be a mess the day he meets his maker. 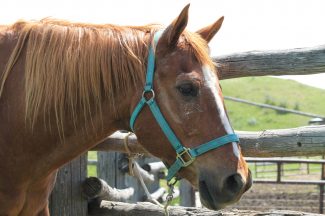 A veteran of long days and hard riding.

If branding the day after Friday the thirteenth, after a full moon, and being forced to wait until the corrals were dry enough to walk in wasn’t enough, there were plenty of  other opportunities for things to go badly. But looking back at it now, things could have been a lot worse. I sure as heck believe in a higher power up above,  and I believe that even when He doesn’t let things be easy, the good Lord still keeps a close watch on us fools down here chasing cattle at break-neck speeds, across fields dotted with mole hills and rock piles. At some point, I just put my faith in my horse and the big guy up above, and accepted the fact that if something was going to happen, nothing was going to stop it.  As I tightened my cinch and loosened my grip on my reins, I pushed that old cow horse further than he deserved, and he just kept on going. He was exhausted by the time we chased six calves around the seventy acre field four times; covered in sweat yet standing on his four sturdy legs. At that moment I knew that I was in good hands.

This horse, who was rank and broncy as a two year old, who shied at his own shadow and preferred running to walking, has turned into a seasoned veteran on the ranch. He has put his life into his work, and while his face and body show the wear and tear of years of being ridden hard, his eyes still have a sparkle of that young colt that just yearned to be wild. He is a one of a kind; the toughest SOB I have ever known under a saddle, and one hell of a cowhorse. 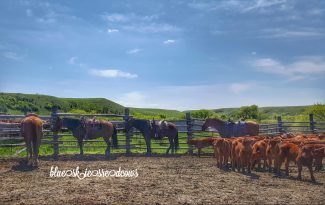 These horses are all damn good hands.

The only thing I would change about him, if I could, is his age- I sure wish we could keep him forever.

Until next time ~ Richelle

Richelle is a part time rancher, home office manager, full time wife, mother, and Customer Service Rep at the local telephone cooperative. She was born, raised, and lives on her parent's ranch in the North- Central part of Montana; and spends most days...

View all posts by Richelle Barrett