Cowboys from across the regions of the Western United States all sit in saddles and ride horses to work. But aside from those general similarities, the gear they pack with them all day can vary widely.

After we moved to northern Arizona from northern Nevada, my husband discovered that cowpunchers carry a LOT more supplies on their saddles than buckaroos. This was not difficult, as the average buckaroo carries slightly less than what he needs to accomplish his day’s work. A buckaroo never carries water, and most don’t wear a coat on a cool morning because they don’t want to tie it to the back of their saddle when the day warms up. They’ll pack medicine if embarking on a doctoring mission, but they’ll carry only a few coils of wire tied with a saddle string if departing for a day of fixing fence. That way, they have a valid reason for discontinuing their fencing project before it starts to feel like work: they ran out of wire and had to turn back.

Meanwhile down in the Southwest, a cowpuncher loads up his saddle with fencing pliers, an entire roll of wire, wire stretchers, medicine, extra medicine, a rope, an extra rope, several tie ropes, a full-sized hot shot, a pistol for predators or in case the hot shot doesn’t produce the desired effect, water bottles for their 13 catch dogs, a spare horseshoe, a hammer, and a travel anvil.

Here’s a picture of my husband’s saddle that he rides to work on a northern Arizona ranch. It looks pretty much the same as it did in Nevada, except the horn wrap really took a shot in the shorts. Instead of latigo, he now wraps his horn with cotton. He says he likes it, and he’s gotten used to looking at it so the aesthetics don’t bother him anymore. 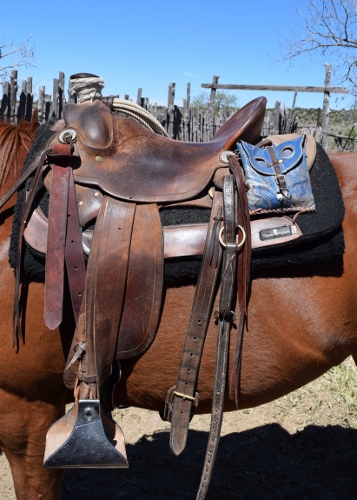 I kind of want to dye the horn wrap turquoise, just to add some buckaroo pizzazz to an otherwise plain and practical piece of gear. Is that weird? That’s probably weird. I think I’ll do it.

Jim carries a medicine bag he made from an old boot top tied behind his saddle, just like he did in Nevada. He also carries his hobbles on the back D-ring, not buckled around his horse’s neck like a real cowpuncher. That’s how you can tell he’s a transplant. Well, that and his non-taco hat, his silver bridle outfits, rawhide reins, 45′ rope and the cavvy mark on his horse’s mane.

On the other side of his saddle, he carries a roll of cloth tape tied behind the cantle and a rope. Like many cowboys, Jim tapes the knuckles on his roping hand instead of wearing a glove. He has a nylon rope tied to his saddle in this picture, but he ain’t scared to use a reata, poly, cotton, or whatever the heck he picks up in the morning. This rope looks new, which makes me feel better. Old ropes can kink and suck a cowboy’s thumb, hand, wrist or arm into a big wreck. So I encourage Jim to purchase new ropes as needed. Possibly sooner, because I know how he tries to extract every last day of use from a rope. 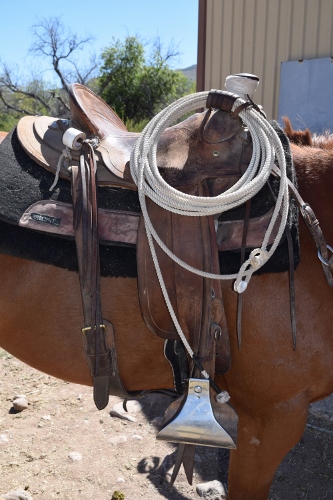 There are different ways of stashing all this gear, too. Up north, few buckaroos have pockets on their chinks. In the Southwest, it seems that most guys have a pocket on each side of their leggings.

Here are Jim’s Arizona bell leggings that he built last winter. As standard procedure, he now carries two tie ropes, a handheld hot shot, a folding saw, a lighter (because a good cowboy always has a source of fire), a metal ring and a climber’s clip. Not pictured: a pistol, an extra horseshoe, a handful of nails and a short-handled hammer. This country is plenty rocky, so a cowboy has to be prepared to fix a flat away from the barn during the workday. Most of the other gear is for catching wild cattle, which are much more common down here than in the Great Basin. 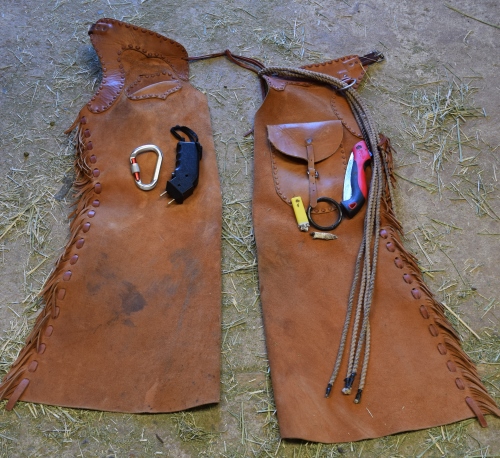 Whew! I think that about covers all that Jim carries to work these days. With all the ropes and metal objects, he probably wouldn’t even notice if I stuck an anvil in his chap pocket. I’ll try it tomorrow and let you know how it goes.