It wasn’t a typical Cowboy Christmas for any cowboy on the rodeo trail this Fourth of July, and it sure wasn’t normal for bulldogger Bridger Anderson, either.

With fewer pro rodeos to compete at, due to the coronavirus, Anderson and his traveling buddies’ schedule was a little slower.

Over this year’s Cowboy Christmas, Anderson competed at Oakley City, Utah; Cody, Wyo.; Mandan, N.D.; Mobridge and Belle Fourche, S.D.; and Prescott, Ariz. It was a schedule of six rodeos in nine days.

“It (Cowboy Christmas) was easy going this year,” Anderson said. “We didn’t rush too much. It was nice.” What else was nice was that nearly everyone in the rig won a little money, including Anderson, who won Mandan and pocketed $3876. He and Stockton Graves, his hazer and his college rodeo coach, tied for fifth place at Mobridge.

Anderson is experiencing another first this year. He’s ranked in the top fifteen in the world, ninth as of press time, and hopefully headed to his first Wrangler National Finals Rodeo.

He’s aboard his horse Teller I Pass, “Whiskers”, a son of Teller Cartel and grandson of Corona Cartel who he purchased three years ago from Tyler and Jackie Schau of Diamond S Performance Horses.

Whiskers is an asset, Anderson said. “He makes my job pretty easy. He’s consistent, he’s powerful, and he has some wheels. He makes bulldogging as easy as it can be. He scores sharp and does his job every time. All I have to worry about is bulldogging.”

The slower pace has given both cowboy and beast more rest, and that is good for the eleven-year-old bay. “He’s been feeling pretty sharp. He thrives with time off. He always feels good, but give him time off and he feels powerful.”

The horse has his share of quirks. “He’s the kind of horse that knows his job, and you do best if you stay out of his way. If you try to tell him what to do, he gets mad at you.” Whiskers doesn’t like to be messed with. “If you’re trimming his feet, he’ll barely pull his feet, just enough to stop what you’re doing. Or he’ll try to walk over the top of you or run over you. You can get after him, but he doesn’t really care.”

On the road, Whiskers is an easy keeper. “He’s the kind of horse that gets along with everybody. He’s fine traveling alone or with other horses. He’s pretty easy to get along with. Him and I did a lot of traveling alone last winter. He’d hop in the trailer all by himself, and we’d be gone for a month, and he didn’t care.”

Anderson is a senior at Northwestern Oklahoma State University in Alva. 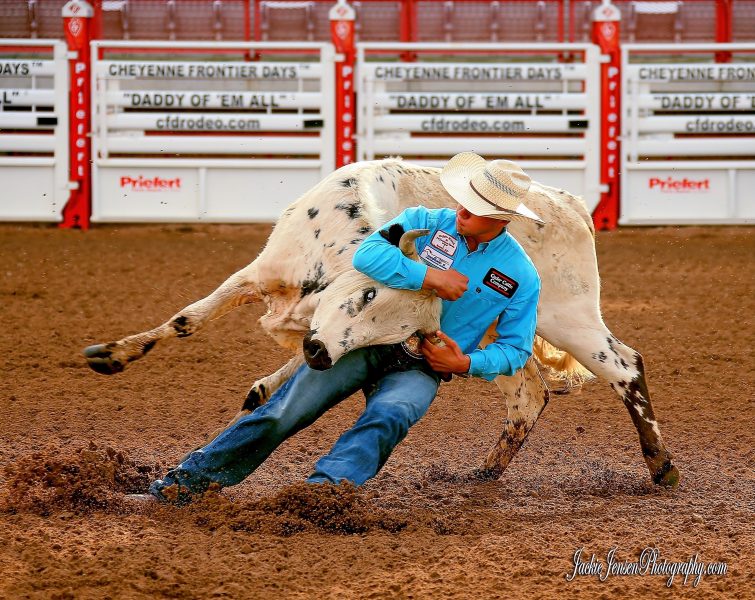 Bridger Anderson steer wrestles at the 2017 Cheyenne Frontier Days. The North Dakota man is ranked in the top 15 in the world standings.