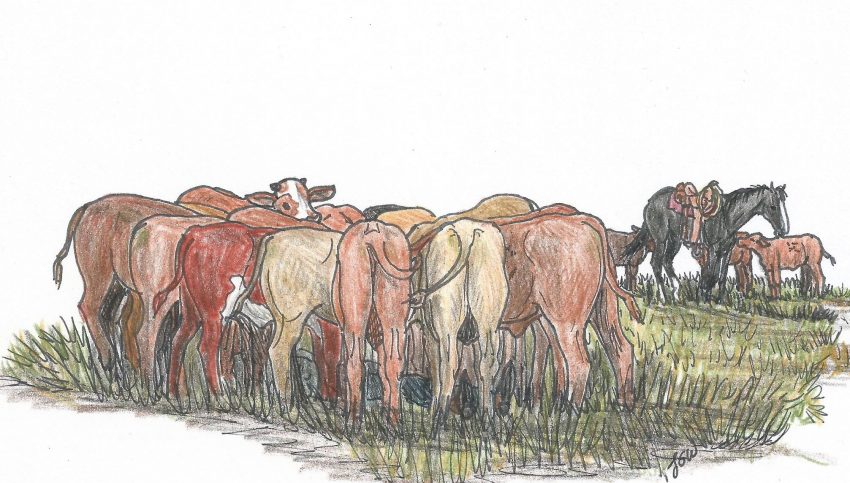 It had been a very long, hot summer riding on contract cattle. The yearling steers and spayed heifers had pinkeye running rampant, the replacement heifers had footrot going strong, and the cow/calf pairs had the usual bull problems. So, after three months, my string and I were weary. Especially me, as there was only one of me but multiple horses.

Since it was getting in the upper nineties daily, I was getting up at 2:30 a.m., feeding my horses, eating breakfast and getting out and traveling before 4 a.m. It was impossible to beat the heat that set in like a headache about 10 a.m. daily, but at least I could get a start while cool. As it was, I wasn’t getting my rounds finished until mid-afternoon. Some days it was nearly dark.

I had left the house before 4 a.m. on my top horse Kelly. I could ride to where I needed to start easier than haul around many miles, so we had hit a fast walk and trot for miles in the dark to the back side of three pastures of cattle. The pasture with the pairs in it was rough with deep draws and it took a while to get through it. I figured on riding through them on my way back from the yearlings that needed doctored before it got terribly hot.

Once out of the rough draws, Kelly and I started across a big flat toward the gate. I recall being part way across it and faintly seeing the pairs scattered out in the distance. Next thing I knew, Kelly was standing still. When I got my bearings, I saw in the pre-dawn light that he was standing at the gate into the next pasture. I had dozed off at some point and he had faithfully gone on with the job at hand, but couldn’t open the gate to continue on.

I was just sodden with exhaustion and knew Kelly wasn’t much better off, so I decided that I was going to catch a few winks and let Kelly graze while I did. I rode him out away from the gate, got off, hobbled him, hung his bridle on the horn, and using my slicker for a pillow, laid down on the ground and conked out.

The sun was above the horizon when I started struggling to get woke up. I felt like something was off, along with being disoriented from my nap. When I opened my eyes, I saw that I was surrounded.

All around me, head to toe, were the calves who had discovered me. I had been sniffed, licked, slobbered on, but not stepped on. Oh boy, if I twitched wrong they might have a panic and run flat over me. I very slowly moved my head to the side. A calf or two stepped back. I moved my arms, some more stepped back. Finally, I sat up very slowly. The calves all backed up to about four feet from me.

I sat there and looked at their sweet faces and curious eyes. They were Beefmaster calves, so had nice big ears, doe eyes, and lots of beef on them. They stood there and studied me while I looked at them. They weighed about 400 pounds or more, so could sure have made a dent if they’d have stepped on me.

When I looked around for Kelly, I could see him dozing in the sun about 50 feet away. He had a few calves around him too. I eased to my feet, my little friends backing up a ways further. They moved out of the way as I walked toward Kelly. Their bright faces gave me such a lift, as had my nap. I knew it was going to be a hot, long day yet, but it had sure been brightened.

After bridling Kelly and unhobbling him, I walked over to the gate and went through it before mounting. My calf posse followed us to the gate and stood there watching as I rode away. There must have been 30 head or more in the bunch.

It was still a long day, but it had a better start after our brief time to rest and restore. A little bovine encouragement made it a better day too.