It’s been quite a job trying to get settled in to a new place in the grip of a cold, snowy winter. The house end of
things has just about ground to a halt, partly due to being just plain sick of unpacking boxes, partly due to not
having the time each day to get much of that done, and partly due to the fact that the shipping container the
remaining boxes are stored in gets the doors buried in snow and then they freeze shut.
The shop buildings, however, are a different story. My son and I have cleaned, organized, reorganized, lost stuff, found it again and generally, due to his hard work and diligence, have the four sections of the little building quite usable. He knows where things are, even though I might not. That’s okay though, as most of those tools are not that useful in my hands anyway. I personally know where all my fencing tools are and am up to speed on their operation, thanks to years of sweating on the handles of them all.
My son is my partner on this place and when he’s here, it’s a high lope all day and sometimes half the night. He’s 27 years old, big, stout, active and, like me, not good at standing still or watching someone else do something. So, we’re matched pretty well on personality traits. We think a lot alike on how to do what needs done and when it comes to cattle work, mesh like well oiled gears.
In my case, I’m 56 years old, not very big anymore (downright shelly), fairly stout for the condition of my joints, not nearly as quick and active as I used to be, but still not good at standing still or watching someone else do something that I could be helping with. My eagerness to get the job done can sure be impaired by my bad knees, stiff shoulders and slowly developing sense of self preservation. You see, at this stage of the game, I need to realize that I’m not 27 anymore and that there are simply things I should not attempt to do. I’ve gotten better at it, believe me, and now, with my son badgering me about it, I have an exterior brain doing some of my thinking. In my youth, I was double stout. I could lift and move things that men bigger than me couldn’t. A chiropractor looked into his crystal ball one day and told me that just because I was as stout as a man my joints and ligaments were still that of a woman. Well heck, when you’re 21 and bullet proof, whose going to listen to that? He was spot on. The wear and tear has caught up with me. But, he’d be glad to know that the late developing brain muscle has been used more and more. Instead of lifting the bale ring out of the frozen crud by hand, which I can still do, by the way, I’ll use the tractor. Mostly because I got a “talking to” by number one son about it. My intent to pitch hay, twice a day, off of round bales to feed my replacement heifer calves was quickly squelched by the voice of reason. He knows how I loath to waste a single blade of hay but talked me into putting hay in a bale ring and letting them feed themselves. Oh it hurts to do that. But, I did decide to let them only eat at night. In the morning I call them back into the smaller corral and feed them their cake and shut the gate. Whew. That makes me feed better.
Back to us working together though, with the preceding being a preface to how danged tired I can get. I have
concluded that working with him every day is akin to harnessing a strapping, big, stout, sound five year old horse with a stove up, spavined, bad kneeded, frosty faced old horse that drags their toes off flat behind. I keep myself whipped up and the tugs tight, pulling my share for as long as I can, then kind of sit back on the britchin’ to rest a bit, then go at it again. Pretty soon though, I stub my toe on a pull and down I go. The big stout one keeps on going, dragging me through the snow on my side, harness straining, as I flounder around trying to get my feet. Finally, he’ll stop and help me up again.
One night, working in the shop under the lights, I was flat weaving in my tracks. He finally looked at me and told me to go to the house. He explained that he appreciated my wanting to help, but killing me off the first six months on the ranch wasn’t going to be that handy in the long run. I was given permission to let myself go rest. It’s a good thing that exterior brain of mine has such a tender heart. I’m learning, he’s teaching me, and I’m taking better care of myself. Those old horses, as you know, have a lot to offer. You just have to pull up and let them take a break once in a while. 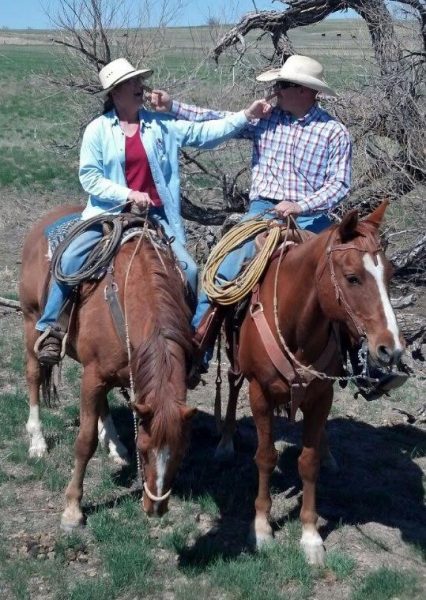