I’ve had cows for all but about four of my 56 years of life. I got my first one when she was a weaned heifer and I was two. For a couple of years after I graduated from high school and was roaming about working on ranches, I didn’t own any cattle of my own, though I cared for thousands of them. When I couldn’t stand it anymore, I bought four sorry looking little heifers that had the genetics to be cowherd builders. Three were half Holstein, the other was half Guernsey, and they were all sired by an Angus bull. Not exactly breed journal cover girl material, but I was after the genetics.
Three of the four were definitely amazing, the other flunked out by raising a calf heavier than her own weight as a two year old and not breeding back. The other three, well, they built a cowherd, just like I’d hoped. I milked two of them off and on for several years too, so they also fed my family in that way. The third one, though never milked for house use, could be depended on to let me snitch  a bottle of her good Guernsey cross milk to spike another calf with. They were just the nicest little cows you’d ever meet.
Generations down the road, I no longer have any cows descending from one of them, more’s the pity, because the majority of their offspring were bull calves. The rare heifer was kept, but the attrition rate is high in cows and somehow, I just ran out of the Bobbie line. The last old cow was sold several years ago.
The Frenchie line (Guernsey cross) is another story. She was a heifer producer and every one of them was kept for a cow, as were most of their daughters, and so on. The common thread amongst them is a perfect bag, rich milk, gentle disposition, and longevity. I’m calving heifers this spring who are eighth generation of the Frenchie line.
Stripe was the third one, and she served as a family milk cow for quite a few years, besides raising a bruiser of a steer calf every year. She only ever had two heifers in her very long career. The first one was a beautiful black heifer who I had high hopes for. She was feminine, gentle, perfectly built and bred right up. When her calf arrived, it nearly starved to death as the heifer gave no milk. She got sold. Stripe’s only other daughter was a gumbo colored Gelbvieh cross that was an amazing producer. Steer calf after steer calf made the scales creak with their weight, until she finally gave me one heifer. She was even better than her mother and her steer calves were heavy. Thankfully, she also gave me several heifers.
Those two heifers from the Stripe line became fantastic cows and their daughters were kept. I have one of those good cows left. She’s a fantastic producer, her young daughters are impressing me with their calf raising ability, and the cow is a perfectly made six year old this year. 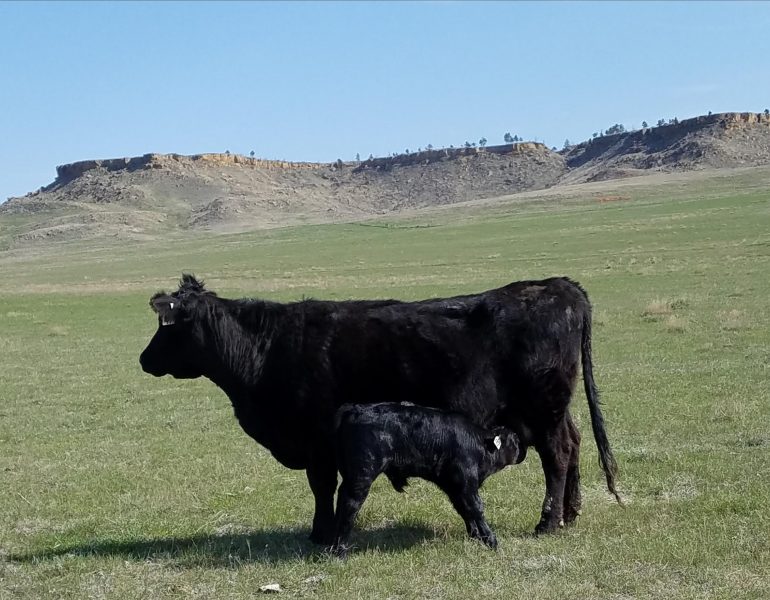 Two weeks ago, that cow went off to a quiet place to calve. She couldn’t get it done. Something was certainly wrong. She was brought in and put in the calving chute and an examination turned up a tail and two hocks. Oh boy. Her pelvic capacity was so generous though, that the hind legs were fished out and the calf was easily pulled. It was a pretty heifer. It was dead.
As I stood at the headcatch, preparing to release her to back out, she reached out to me with her nose, gentle even in the face of all that had gone wrong. I didn’t have a calf to snitch to put on her. She had calved right at the front end, as she always does. I can’t justify paying an obscene amount of money to buy a baby calf to graft on to her and also risk bringing some nasty bug to the place to make bigger problems, so she was turned out to dry up.
Maybe not everyone feels about their cows like I do, and that’s okay. My cows and I go back for so many years (over 35) and I’ve been through hell to keep them. I’ve lost large and started over, always retaining the core bunch that started with those three little heifers. I’ve nearly had to graze them down the road ditches for pasture at times. I’ve laid awake many a night trying to figure out how to scrape by another season, praying for wisdom. But, year in and year out, those cows have taken care of me while I took care of them and God took care of all of us.
Last fall, my cows and I moved and started over on this new place. When I check them and see the little calves bouncing around, in my mind I also see those three potbellied, hairy, skinny heifers when I bought them. They did it. They built a cowherd.