As I was driving out to cake cows this morning, I had the radio on. It’s the only time I listen to the radio it seems, and for
good reason. It aggravates me. My feed pickup’s radio face doesn’t light up so it’s anybody’s guess as to which station you’re on or whether it’s AM or FM. That’s problematic these days because most so called country music is pop so one doesn’t know what station they have until they announce it. I bend my finger over several times a day getting the station changed to another unknown to get away from some sing songy voice sharing something epic like drinking and fishing, or the heartbreak of losing his favorite girl. Just my opinion, but he might be able to keep a girl longer if he wasn’t wearing pants just like hers and a dippy hat. Also, maybe he shouldn’t be sitting in a bar expecting to find the girl for him, or if he fished less and worked more, that might help too.
Anyway, I had the radio on. It’s the first week of April, usually thought of as springtime. It’s 0 degrees out. The wind is
blowing from the northwest and there isn’t a snowball’s chance in Honolulu that it’s going to melt any of the generous amount of snow on the ground today. Or probably tomorrow either. It’s been a really, really long winter for everyone, but especially those who have stock. It’s been an even longer winter for the stock, I’d vow. 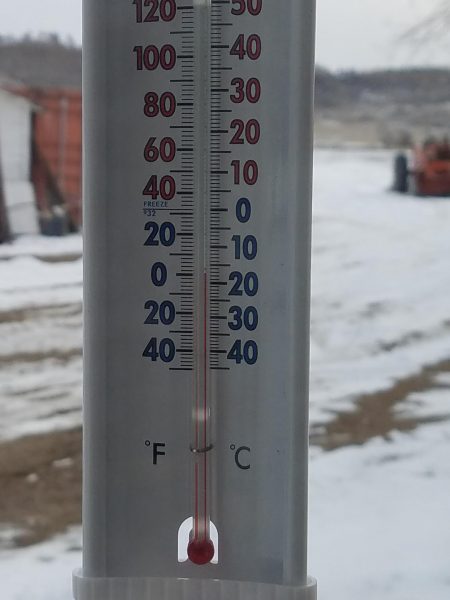 The DJ on this so-called country station is moaning on and on about how terrible the weather is. He’s complaining that he
can’t get out and do all the fun things he wants to do in the spring. His car needs washed and it’s too cold to do it. He’s even whining about how he misses mowing his lawn. Really? He’s working in a climate controlled studio, probably in a t-shirt and skinny jeans, drinking a cup of candy coffee that won’t get cold for hours and his shift will be done, no matter what, at a designated time.
My friends and neighbors who are calving and lambing, some even foaling, aren’t living under those conditions. They have their floors covered with cold calves, they’ve got lambs under heat lamps, foals wearing a big dog coat or a sweatshirt, and it just doesn’t give them a break. They don’t get any sleep or even time for a shower most days. My heart aches for them. I’ve been there, in their dirty work boots, so many times.
My cows aren’t calving. Yet. They are probably 10-14 days off, or at least I hope they are. They are showing signs of
bagging up and it’s right on schedule. I walk through them, carefully scrutinizing them to make sure none are going to sneak up on me. My days consist of feeding cake, chopping a little ice as needed, feeding hay out of the wind during a storm and trying to prepare for calving with frozen ground to build fence on. My day’s problems are negligible compared to those who are in the throes of livestock reproduction season.
To listen to that guy on the radio, who probably believes he really has problems, just set my teeth on edge. I wanted to call
the radio station but thought better of it. Most folks like him don’t want to know about the muddy underbelly of livestock
production. They wouldn’t understand a 50 year old rancher weeping over calves found dead that he thought were doing fine. He wouldn’t understand that their livestock’s wellbeing is more important than their own. He wouldn’t understand that the winter that never ends may actually break some of those ranchers. Death loss, high hay costs to run that cow or ewe that is now dry, and the stress have worn them down. They are truly at their breaking point.
But, they pull themselves together, put on some dry socks, grab a bite to eat and a cup of too-long-made coffee to wash it
down with, and go back out into the cold. They’ll make it one more day, one more night, until spring finally makes an
appearance and decides to stay until summer. Just like we’ve always done.
Maybe there ought to be a country song written about that.