I saw a post on Facebook the other day that said “When is this old enough to know better supposed to kick in?”.
That was so profound for me. I wonder that most of the time. Truly, I don’t make big decisions quickly. I ponder and belabor them until I’ve worn out every “what if” that is available on the subject. Then, of course, make the decision and, like as not, am still wrong. But, I thought it through thoroughly.
Snap decisions are about as successful. I’ve been known to believe that speed will replace traction when going through snowdrifts. But, some things I’m ridiculously cautious about. For example, it could be -30 degrees for the 45th consecutive day and I still will NOT drive a pickup out onto the ice on a dam. Nope. Ain’t happening. I’m extra cautious when crossing muddy creeks too, probably because I grew up on The Gumbo and a killdeer could get bogged in crossings there.
Now that I am past 50 by a decent margin, age achieved wisdom has me way more careful about slick ground. I have had my snow grip devices on my work boots for weeks now. It’s been icy everywhere since the beginning of December and I loath the thought of falling. Even slipping can cause damage these days. I was doing chores the other day and was gingerly negotiating the ice patches with my grippy footwear and observed all three dogs fall at least once. I was already puckered up in spite of my footwear, so then I pulled my tranny into low range and crept along so slowly that I nearly needed to start night chores by the time I got day chores finished.
As far as being old enough to know better, not being a common trait in humans, it isn’t found in all animals either. My grandson’s old mare Stardust is finally retired from all duty other than being a pasture ornament. She’s in good shape but her old joints are stiff, especially her hocks. She “quit her job” last summer when she decided that bucking with a small child was preferable to packing him one more mile. So, she is turned out with the other horses over in a pasture with a tree lined creek running through it. Good grass, water and protection and she is wintering very well. We have no idea how old she really is but suspect she’s close to 30.

We were making our rounds one day and the horses were up by the road, so we stopped to check everyone over. Horses are so accident prone that it’s a necessity. Everyone was shiny, fat and healthy looking. No wire cuts or wounds on their legs or bodies. With the whole group vying for attention and a piece of cake, it took old Stardust quite a while and a lot of mean faced scowling to wedge herself between two of her herd mates. When she finally did, we were sure glad we stopped to check them. The senior horse, the one who has lived on earth the longest and made choices to keep herself sound and healthy, had shown complete lack of judgment. Her muzzle was absolutely covered with porcupine quills. We could only deduce that there was a semi-naked porky somewhere along the creek. She had apparently given it a root with her nose to get that many. 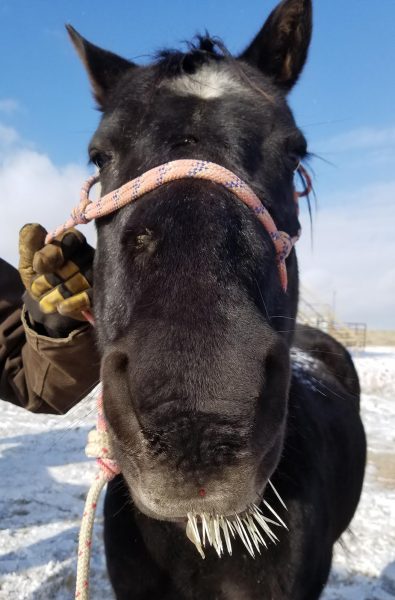 Stardust is gentle but strongly opinionated. We weren’t sure that the quill extraction could be accomplished out in the pasture but decided to try. There’s always a halter in the pickup, so she was caught and with the pliers on his Leatherman, Colin started plucking quills. I held her head as still as possible. It took a long time and she got quicker at dodging the pliers as we went. But, unbelievably, she never struck at us or tried to jerk away. I think she knew, down in her old black heart, that she was in trouble. We gave her frequent breaks with small pieces of cake being fed to her between the quills, which were on both upper and lower lips. Finally, the last quill was pulled. Her muzzle was covered with little drops of blood, but no permanent damage was done. A check of the inside of her mouth (she really liked that) revealed no quills. So, with a good pet and scratch and a few more pieces of cake, she was turned loose. Hopefully she’s now old enough to know better than to do that again.
So, I guess I don’t feel too bad about not always being terribly wise at my age. Everyone makes mistakes, even old codger mares that have survived for decades.