Cottonwood Creek Chronicles; If It Can Go Wrong It Will

It’s been quite a while since I checked in with everyone from my outpost on Cottonwood Creek. I’m still alive. It’s been quite a winter. It felt like it started in September, took a short break in January, and then resumed with a vengeance. It also seems like lately, if it can go wrong it will.
In January we had an old fashioned chinook come through. It melted the snow and ran water everywhere, put water in the dams and made the creeks run bank full and then some. It bared off all the grass so the grazing was easy and there was water everywhere to drink. Then it ended. It was running water off the hills and across the flats when the temperature dropped  to 10 degrees in a matter of hours and actually froze a sheet of ice on sidehills.  The ground around the buildings and in the corrals was absolutely glistening with ice.
February arrived with the ranch encrusted with ice. Then it snowed. And snowed. Just little snows off and on, but it covered the ice, so it became even more dangerous. Cows moved at a sloth’s pace. I don’t know how many hundred times the dogs fell down while running about. It doesn’t seem to faze them though, they just jump up and go again. Not me. I creep along in my grippy footwear and hang on to anything close just in case. So far so good.
A week or so ago, it decided to snow a lot. It came with below zero temps with enough wind to drift it a little and give us balmy -30 to -50 wind chills. Before it was over, there was easily 16 inches of fresh snow, maybe more, on top of the five or seven inches already there. Digging out became the first chore even before feeding. Can’t feed if you can’t move, right?
So, I got the big tractor fired up and started moving snow. It’s a big tractor here but not anywhere else, you understand. It’s simply bigger than my other one. I got everything fed the first day after the storm and spent the balance of that day moving snow. I had to move snow to have a place to move snow to. I was getting along okay, being careful as possible, but due to the depth of snow and lack of shadows, depth perception was sketchy. I was attempting to back drag a drift away from a bale I’d been feeding off of by the manger. I misjudged where the cement pad was that it was sitting on and broke two teeth on the loader. Oh joy. Yes. That’s probably what I said. I picked up the one that was broken off clean and put it away for safe keeping and kept working. 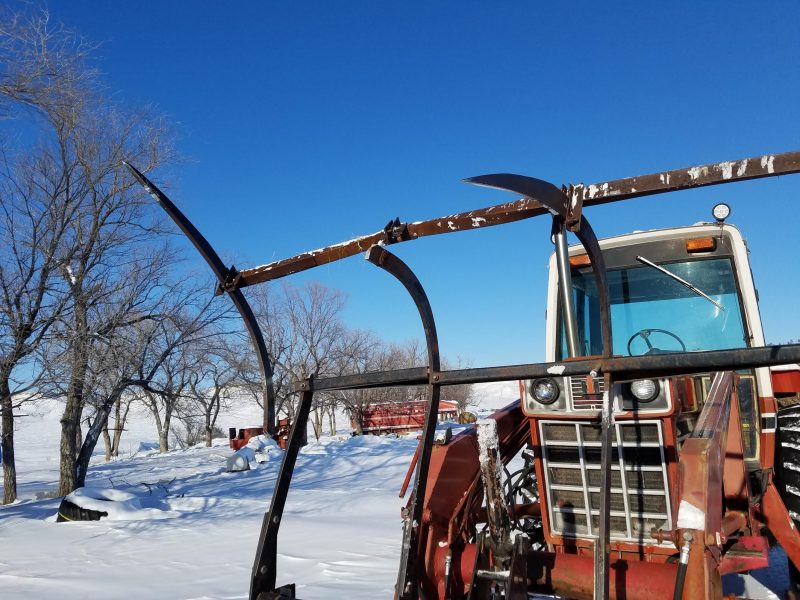 I wanted to make a couple more passes through the yard to really have it cleared out then was going to go and clear the trail and gate into the pasture where I was feeding cows. So, I eased around a tight spot, lowered my bucket and started to push that little patch of snow out of the way. The tractor stopped moving. It wouldn’t go forward, it wouldn’t go backward. It just spun it’s wheels on the patch of ice it was on and wouldn’t do anything. I couldn’t even get any grip with the bucket on the loader and push myself off backward. Nothing. Well rats.
I dug my phone out of my pocket and called the best neighbor in the world. No answer at the house. I tried his cell phone and it went to voice mail. It was late so I decided to call him in the morning and see if he could come with his really big tractor and give me a pull off the ice. I was parked out quite a ways from an outlet so I hooked two big cords together to plug the tractor in, ensuring, hopefully, a start in the morning.
The next morning, I got ahold of my neighbor and he said he’d be over in just a bit, so I bundled up and went out at 7 a.m., -26 actual temperature, and tried to start the tractor. Nothing. I crawled back down and checked the engine block to see if it was warm. Nope. I followed the cord back to be sure it was still hooked up and found that the connection between the two had been stepped on by a neighboring group of idle horses who had come to visit in the night. I’d seen their piles and tracks but hadn’t suspected any criminal activity until I saw the crushed and dead end of the really good cord.
Neighbor Bob arrived and we finally got the big, dead, unstearable tractor dragged off the ice. I got a different cord and plugged it in so that maybe, just maybe, hours later, the tractor would start. I also had my other tractor plugged in just in case.
He asked if I thought I’d be able to get hay out to the cows and I said, honestly, I didn’t know. The snow was awfully deep to get through with that smaller tractor. He said we’d just go feed them with his processor and then I wouldn’t have to worry about it right away. So, we both got in the cab of his tractor, he plowed a wider trail out to the hay yard and grabbed two bales in the bucket and we headed out to feed the cows, much to their amazement. They’d never seen a bale processor before. Plus they weren’t even off of bed ground yet, being that early.
In what felt like a couple of minutes he had the hay fed for the day and went on his way, after plowing a mountain of snow out of the gate and trail coming back to the house.
It was quite a contrasting two days: one day being “if it can go wrong it will” and the next being “what would we do without our good neighbors”.
I’m plugging along with my big tractor and it’s broken teeth, getting the feeding done with the two remaining teeth until it can be welded back together. I keep moving the snow that blows in as the wind shifts and comes and goes. It’s winter on the northern plains, so this is what we all signed up for. Some winters are better than others, but it’s just winter. I am feeling just a touch of tractor envy though.