Snow. There’s been so much of it this winter. It kept getting deeper and deeper until the cows couldn’t graze and
then the horrors of feeding that expensive, boughten hay began. I am so grateful to be able to feed them though, and
along with the cake they’ve gotten all along, they’re doing pretty well for their first winter on a new place.
I am too, but oh, I’m tired of snow. Spring can’t come too soon for anyone here on the ranch. The days have
warmed considerably from extreme lows of -36 and daytime highs of zero or barely above. The sun and a 35 degree
day feels like the tropics! There have been several of those lately and it started that white misery to melting.
A little 24 hour squall came through the other day and started with rain. Then it turned to ice balls, then snow.
What wasn’t iced over before was positively glazed with that freezing rain. Oh boy. Talk about slick! My cat could
hardly walk across the yard or corrals when it finally let up.
When I was a kid, I was pretty handy and athletic. Even into my adult years, I just didn’t fall down, ever. I could
handle myself pretty well. Let me tell you, now that I’m a Grandma and have bad knees, surgically repaired
shoulders, hip and wrist, the very idea of falling down makes me break out in a sweat.
I’m sure that anyone watching me walk on slick ground would have to surmise that I had my shoelaces tied
together. Tiny steps, carefully placed, one after another. It would look like a large centipede trail if it was visible.
Just getting out of the house is a challenge as the absent eavestrough above the sidewalk leading from the house
keeps the walk coated in ice, no matter what I put on it to break it up. I’m thinking ahead all the time though, and
have ground it into my brain to fling myself into the three foot deep snowbank next to it if I feel myself falling.
Thankfully, I haven’t had to see if that would work yet. It’s a good theory though.
When I cake the cows in the morning, part of the routine is to go down to the spring and open up the hole for
them to drink. I used to be able to drive partway down but the increasing snow finally put an end to that. The trail
down runs parallel to a cutbank that has anywhere from an eight to about a 16 plus foot drop, nearly straight off. At
the bottom is the ice where I have the hole for the cows to water out of. The cows walk this trail so it is packed
pretty flat and smooth. Then it melted a little, got rained on and glazed over. Oh boy. The day after the freezing
rain, there was a skiff of snow on top of the ice, making it even slicker. I used my shovel for a walking stick/brake
and started down. I was making progress when it dawned on me that if I did slip, I was liable to shoot right off the
edge of that drop. I very carefully worked my way over as close to the upper bank as I could. If I fell I might
torpedo down the trail but maybe avert the fall over the side. See, I’m thinking all the time. I stopped once and
looked up and there were several cows watching me from above. I don’t know if they had bets on the table as to
whether I’d fall and how far I’d slide or not, but it seemed they were pretty interested. I made it to the bottom, nearly
in a cold sweat, and back up again that day. 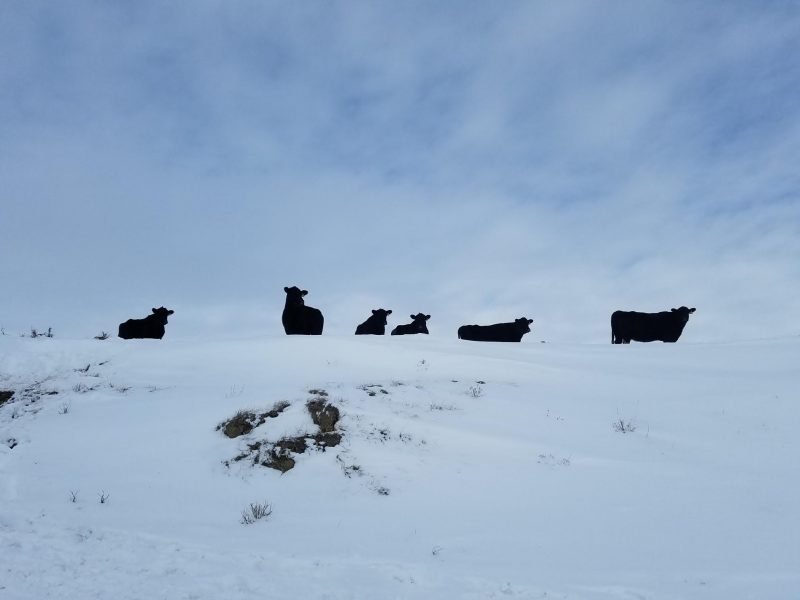 The same day after the freezing rain, the corrals were a very lumpy skating rink too, with the added bonus of
frozen cow chips and fresh snow on top of all of it. My heifer calves are very gentle and I feel like a mother duck
with her ducklings each day as I cross the corral to open the gate to let them out on the hay. That day was no
different, a veritable cloud of bouncy, happy heifers right on my heels. I stepped on the edge of a cowchip hidden in
the snow and my foot shot out from under me, I did an interpretive dance somewhat like a figure skater, flailing my
arms for balance and saying some words fairly loudly. The calves, instead of being startled by my wild dance
moves and noise, jumped in the air and danced with me. It ran through my head that if one of THEM fell on me that
that was going to hurt even worse. But, hallelujah, I kept my feet and with heart pounding got to the gate to let them
out.
So, for the record, I haven’t fallen. Yet. I’ll be so glad when the ice turns to mud at last. At least if I fall on it, it
might have some give to it. It’s kind of a shame I’m here alone most of the time because I’ll bet I’m really funny to
watch.